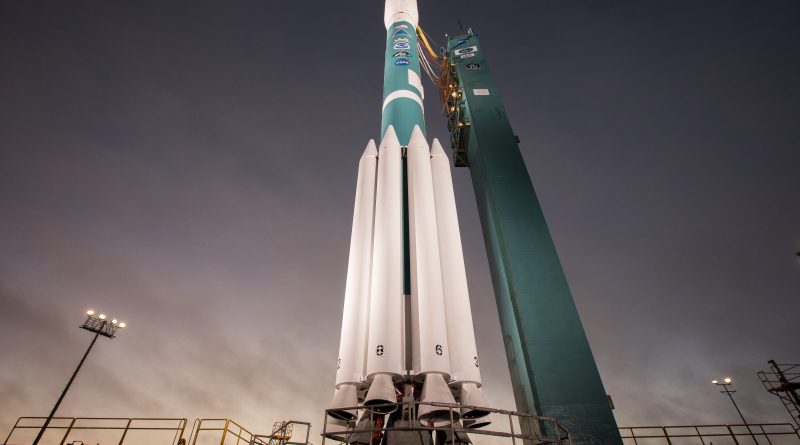 ULA’s Delta II rocket was forced to abandon a nighttime launch attempt from California in the early hours on Tuesday due to a technical issue with the rocket’s second stage engine actuator as well as a fouled range with boasts in the offshore hazard area where the vehicle’s ground-lit boosters were expected to impact. Liftoff with the JPSS-1 satellite has been rescheduled for 9:47:02 UTC on Wednesday, the opening of a brief window.

The second-to-last Delta II rocket to take flight was revealed atop its SLC-2W launch pad at Vandenberg Air Force Base Monday afternoon when the Mobile Service Tower retracted to its launch position to mark the start of an overnight countdown operation. A picturesque sunset behind the 39-meter tall rocket followed by the typical nighttime fog moving in over Vandenberg set the stage for the penultimate Delta II mission, approaching the end of a three-decade career next year.


With the complex cleared by all personnel, countdown operations formally began with an hour-long hold at the T-2 hour and 30-minute mark before teams pressed into activation of the rocket’s avionics for a detailed set of checkouts. Delta II received its dose of nearly 30 metric tons of Rocket Propellant 1 before clocks hit the T-2-hour mark and launch controllers cleared the vehicle to load 67 metric tons of Liquid Oxygen oxidizer.

Delta II stood fully fueled atop its launch pad as oxygen naturally boiled off and was replenished on its first stage while the second stage had been sitting fully fueled for a number of days given its use of storable propellants. The vehicle entered a series of slew checks on its RS-27A first stage main engine, two sustainer engines on the first stage and the AJ-10 on the Delta-K second stage. No issues were reported at that point and final countdown operations commenced with the upload of the appropriate trajectory file into the rocket’s computers while the 2.5-metric-ton JPSS-1 satellite made its transition to battery power.


The countdown held at T-4 minutes and all appeared to be ready for liftoff until two problems were reported to the launch team. The first was a RED condition on the Western Range due to boats straying into the offshore hazard area and the second was a red line limit tripped for the yaw actuator current on the second stage’s thrust vector control system, occurring just as the team was pressing into final polling.

Due to these two No-GO conditions, a HOLD was called immediately before the countdown would have resumed. Since the launch had been re-targeted for the center of the night’s launch window at 1:47:35 a.m. local time, the launch team only had half a minute before window time ran out – not nearly enough time to troubleshoot the suspect current signature and clear the range. With the launch officially scrubbed, teams headed into safing of the Delta II rocket and de-tanking procedures.

The initial call made to the launch team instructed a 24-hour recycle operation to go in motion with an identical launch window of 9:47:02 to 9:48:08 UTC on Wednesday, looking at 80% odds of favorable weather with ground winds remaining the primary concern for the nighttime liftoff.

This is the second launch from the U.S. to be impacted by range intrusions in the last week after the Antares rocket launching the Cygnus OA-8 cargo spacecraft had to abort its countdown on Saturday due to a low-flying aircraft moving into the closed airspace around the rocket’s Wallops Island launch complex. Antares had to move to the back of its five-minute launch window on Sunday as boats had to be moved out of the off-shore hazard area.

For Delta II missions from the Western Range, closed air and marine space exists for the standard hazard zone around the launch pad to protect the public in the event of an explosion on the pad or failure early in flight. Additional offshore areas are closed for Delta II launches due to the six impacting Solid Rocket Motors that separate only 86 seconds into the flight and are actually held after burnout to ensure their safe off-shore impact.

One additional peculiarity for nine-booster Delta II vehicles is the ejection of three nozzle plugs from the three air-lit boosters which are the first components coming off the launch vehicle as the air-lits ignite around 65 seconds into the mission. These three plugs have been known to actually make their way back to shore if upper level wind conditions are just right, requiring careful planning of exclusion zones.