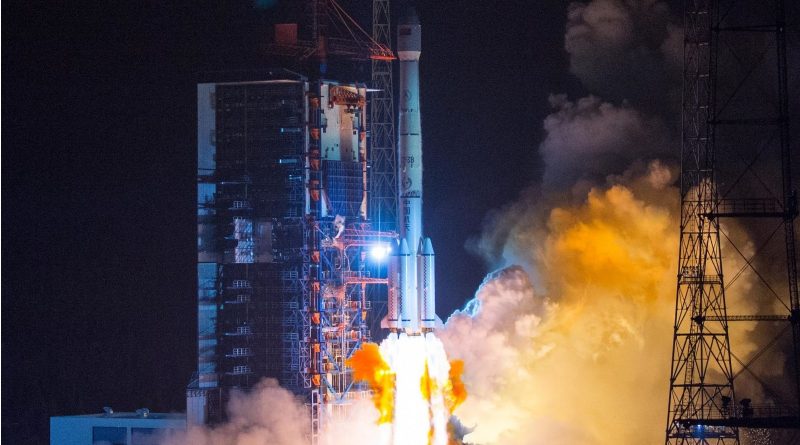 China was back in action on Thursday, conducting a rare commercial launch of a Long March 3B rocket with the APStar-6C communications satellite for APT Satellite Holdings to join their constellation of Geostationary Communications Satellites. Long March 3B lifted off from the Xichang Satellite Launch Center at 16:06 UTC on a mission of under half an hour to lift the spacecraft into an elliptical Geostationary Transfer Orbit.

Confirmation of launch success was provided by APT Satellite around 40 minutes after liftoff when the satellite had been separated into its target orbit.

Thursday’s launch was conducted under the auspices of the China Great Wall Industry Corporation (CGWIC) that offers Chinese satellites and launch services on the international market as the sole provider licensed by the Chinese government. The APStar-6C contract was signed in October 2015 as a package deal, covering the satellite, to be built by CAST, and the mission’s launch service, to be provided through CALT using the Long March 3B rocket.

The satellite’s 26-transponder C-Band payload provides wide-beam coverage over the entire Asia-Pacific Region for broadcasting applications with coverage spanning from Eastern Russia all the way south to Australia and New Zealand and from the Arabian Peninsula all the way east to Hawaii.


Three Ku-Band coverage zones are to be provided by APStar-6C: 1) delivering focused coverage to Eastern China with concentrated transmit power around large hubs like Hong Kong; 2) providing services over South-East Asia including Myanmar, Thailand and Laos; and 3) offering a dedicated coverage zone to Mongolia.

APStar-6C is only APT’s second Chinese-built satellite after APStar-9, having previously relied on Hughes, Space Systems/Loral, Thales Alenia and Lockheed Martin as satellite manufacturers. APT Satellite Holdings Ltd, officially registered in Bermuda, is the sole owner of Hong Kong-based APT Satellite that has been acting as the operator of the APStar fleet since 1992. As a red chip company, it has been indirectly controlled by the Chinese Government (through CASC) since its formation.

APT Satellite Ltd. launched or otherwise acquired a total of ten satellites since 1994 (including APStar-6C); five satellites (APStar-5, 6, 7, 9 and 9A) remain in active service for the company and another two (one fully owned satellite and one leased payload) are set for launch this year.

The contract for APStar-6C was signed on October 17, 2015 (the same day of APStar-9’s successful launch) with a launch readiness date specified for May 1st, 2018.

The satellite completed its pre-flight testing campaign by the end of January after final thermal vacuum tests. Liftoff had initially been planned on March 15 but then slipped to April 21st with the satellite arriving at the Xichang launch base in the Sichuan province in early March. By mid-April, the launch was re-aligned for just after midnight on May 5th, local time, within a week of the contracted launch date specified back in 2015.


Thursday’s mission marked the 13th orbital launch carried out by China in 2018, continuing on track to a new record-setting year. It was the 273rd launch of China’s Long March family, according to a count kept by launch provider CALT, and the 46th for the Long March 3B heavy-lift variant. Another two or three Chinese launches can be expected this month with Gaofen-5 due for liftoff on May 8, the Queqiao Lunar Relay Satellite aiming for a May 21 liftoff and the next pair of Beidou navigation satellites set to depart Xichang not long after APStar-6C.

Long March 3B/E weighs approximately 456,000 Kilograms, stands 56.33 meters tall with a core diameter of 3.35 meters – comprising four liquid-fueled boosters, a pair of hypergolic stages and a cryogenic third stage in charge of the final injection via a two-burn flight profile. Firing up its boosters and powerful core stage, Long March 3B lifted off from Xichang at 12:06 a.m. local time with a total thrust of over 600 metric-ton-force. After a vertical ascent of a few seconds, the rocket began to pitch and roll onto its planned ascent path, taking it south-east across China before passing over the Pacific Ocean.

With all engines firing at full throttle, Long March 3B/E burned 2,350 Kilograms of propellant per second as it started racing uphill and making its way downrange. Each of the four boosters delivered 75,500 Kilogram-force of additional thrust to the vehicle using a single DaFY-5-1 engine, consuming 41 metric tons over the course of a burn of 140 seconds after which the boosters were to drop away from the three-stage rocket.

A series of 14 pyrotechnic bolts were to fire to disconnect the first and second stage, allowing the second stage’s vernier engine to move the stack away from the empty core stage. Moments after staging, the second stage was to ignite its DaFY-20-1 main engine, soaring up to a thrust of 75,700 Kilogram-force to continue powered ascent. Overall, the second stage launched with a propellant load of 49,400 Kilograms, measuring 12.92 meters in length and 3.35 meters in diameter.

While the second stage was firing, Long March 3B was to depart the dense atmosphere, making it safe to jettison the protective payload fairing and expose the APStar-6C satellite for the rest of its ride uphill.

One second after staging, the 12.7-meter long third stage was to ignite its two cryogenic YF-75 engines to push the stack into a Low Earth Parking Orbit with a total thrust of 16,000 kgf. Aiming for an orbit around 190 Kilometers in altitude, the third stage was expected to burn for around four minutes and 45 seconds before heading into a brief Parking Orbit Coast. The coast phase, nearly 11 minutes in duration, was set up to allow the stack to fly to a position where the second burn could be performed around the equator passage so that the high-point of the resulting orbit would be placed over the equator.