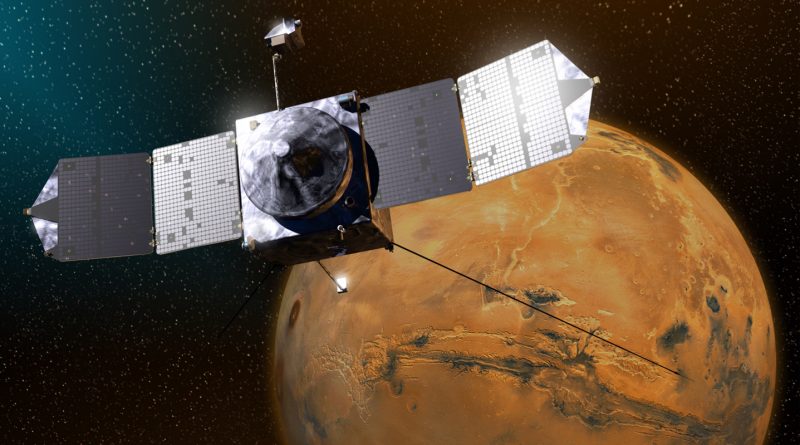 NASA’s MAVEN spacecraft – circling Mars in a highly elliptical orbit to explore how the planet lost most of its atmosphere – had to fire its thrusters this weeks to steer clear of a collision with Mars moon Phobos on March 6. The slight alteration of the craft’s orbit set up a safe pass with MAVEN expected to miss the lumpy moon by about two and a half minutes.

MAVEN, the Mars Atmosphere and Volatile Evolution spacecraft, arrived at Mars on September 22, 2014 and entered an elongated orbit peaking 44,500 Kilometers above the planet before spiraling down via a series of Period Reduction Maneuvers to achieve a nominal science orbit of 175 by 6,200 Kilometers, inclined 74.2 degrees. This orbit allows the spacecraft to make in-situ measurements in the upper layers of the Martian atmosphere when passing periapsis and studying the planet as a whole when reaching the higher altitudes of its orbit.

MAVEN’s peak altitude is slightly higher than the orbit of Phobos that circles Mars in a nearly circular orbit 6,000 above the surface at an inclination of one degree. If the geometry works out right, this can make for a number of close approaches between the MAVEN spacecraft and the heavily-cratered moon.


Back in December 2015, MAVEN made a series of close approaches of Phobos and came within 300 Kilometers to capture unique spectral measurements of the low-orbiting moon to determine its composition which may help in revealing its origin. There are different theories as to whether Phobos formed in orbit around Mars or is an ancient asteroid captured by the planet.

While the 2015 passes occurred at a safe distance and provided a valuable scientific opportunity, the March 6 encounter presented a serious collision threat between the Martian moon and the MAVEN spacecraft. Orbital predictions for the two bodies lined up perfectly next Monday and both objects were calculated to be passing the intersection point within seven seconds of each other – too close for comfort given Phobos’ size of 27 x 22 x 18 Kilometers, modeled for simplicity and extra margin as a 30km sphere.

MAVEN fired up its thrusters on Tuesday and accelerated by just 0.4 meters per second, roughly 1.5 Kilometers per hour. Over the course of a week, this small impulse will move MAVEN well clear of Phobos with around two and a half minutes of margin.

“Kudos to the JPL navigation and tracking teams for watching out for possible collisions every day of the year, and to the MAVEN spacecraft team for carrying out the maneuver flawlessly,” said MAVEN’s Principal Investigator Bruce Jakosky.

This was the first collision avoidance maneuver carried out by the MAVEN mission and illustrates the importance of situational awareness even when in orbit around a foreign world.

This system was born out of necessity as traffic around Mars began getting busy – currently with six active orbiters circling the planet in vastly different orbits that intersect regularly. With more missions inbound over the coming years, conjunction assessments will become an important aspect in keeping spacecraft safe and Mars free of orbiting debris.

MAVEN is approaching its 900th day in Mars orbit, still collecting science data at full speed as part of an open-ended extended mission currently funded through September 2018. Nine instruments installed on the spacecraft study the current Martian atmosphere in order to learn more about the state of today’s atmosphere and take a look into the distant past. As surface missions have shown, Mars once had a thicker atmosphere and was warm enough for liquid water to flow on its surface. Somehow, that thick atmosphere was lost to space – overall Mars has most likely lost 99% of its original atmosphere over a period of several million years as a result of its core cooling down and its magnetic field decaying.

MAVEN was able to confirm that the bulk of Mars’ original atmosphere was stripped away by solar wind and the process was still ongoing as the planet loses around 100 grams of atmospheric gas per second. Peering deeper into how different species escape the Martian atmosphere, MAVEN found a significant variability in the escape of water over the course of a Martian year. According to measurements by the craft’s instruments, the rate of hydrogen loss – used as a tracer for water – increased by a factor of ten when Mars was at its closest point to the sun.

Hydrogen loss was believed to be a slow and steady leak, but MAVEN’s findings show an episodic flow, rising and falling with changing seasons on Mars. At the root of this variability likely lies a complex interplay between Mars’ position in its elliptical orbit around the sun, seasonal effects that drive the water content in the lower atmosphere, variations in transport of water to the upper atmospheric layers, and finally solar activity over its 11-year cycle.

MAVEN’s Ultraviolet Imaging Spectrograph delivered the first global view of the Martian Atmosphere in the ultraviolet wavelengths, providing a detailed look at dynamic, previously invisible processes. One of the benefits of MAVEN’s elliptical orbit is the ability to take hundreds of global snapshots of Mars over the course of the year to study how the planet’s atmosphere changes.

UV measurements over the night side of Mars showed an airglow process already seen by previous missions and attributed to the recombination of oxygen and nitrogen to form nitric oxide, a process that occurs in reverse on the dayside as NO is broken down by photochemical reactions. More impressively, MAVEN’s UV instrument was able to capture signatures of ozone, showing ozone depletion when water vapor is present in the atmosphere which provides a new method of tracing global winds and atmospheric circulation. Additionally, the instrument captured views of fast-forming clouds over Mars’ large volcanoes – providing novel insight’s into the planet’s energy balance and water budget.