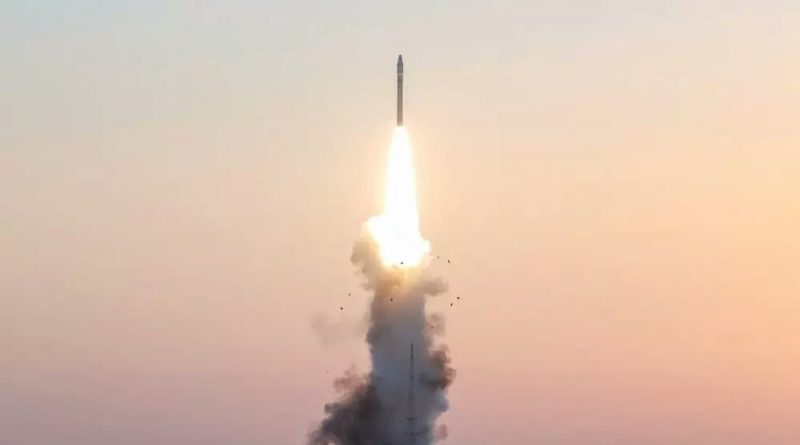 Official Chinese media confirmed the success of the launch and identified the launch vehicle only as KT-2 and the satellite as TK-1.

U.S. Space Surveillance detected two objects related to this launch, one in a 374 by 404-Kilometer orbit at an inclination of 96.9 degrees (presumably the TK-1 satellite) and the other in a lower orbit of 214 by 399 Kilometers, inclined 96.7° (presumably the rocket’s upper stage after performing an altitude reduction to speed up its orbital decay).

Over the past two years, China introduced a total of five new rockets – three new additions to the country’s Long March series that builds the backbone of China’s space architecture and two solid-fueled rockets optimized for cost-effective satellite deliveries into Low Earth Orbit. Thursday night’s mission stood out as virtually no details on the launch were released beforehand.

Kaituozhe, Chinese for ‘Explorer,’ represents a family of orbital launch vehicles developed by the China Aerospace Science & Industry Corporation (CASIC) dating back to 2000 when development of the KT-1 rocket began based on the Dong Feng-31 Intercontinental Ballistic Missile.


KT-1 was designed as a small, all-solid launch vehicle capable of lifting around 100 Kilograms into a polar Low Earth Orbit using a four-stage stack. Its first launch in September 2002 failed to deliver a 50-Kilogram satellite into orbit due to a malfunction of the rocket’s second stage and another launch a year later also ended in failure, but was able to demonstrate a number of critical components including the vehicle’s guidance system and separation events.

There were rumors of a third and fourth KT-1 launch in 2004 and ’05 and the program appears to have been canceled after failing to deliver results. KT-1 was also suspected to be a pathfinder for anti-satellite weapons technology.

The KT-2 concept represents an advanced development taking either the DF-21 or DF-31 as a basis, employing a three-stage stack with stages of equal diameter (1.4m if DF-21-based) to achieve a reported Sun Synchronous payload capability of 250 Kilograms (700km SSO) and a LEO capability of 350 Kilograms.

An enhanced version called KT-2A, shown as a model in the early 2000s,  employs the DF-31 first stage, a pair of boosters based on the DF-21 missile, a 1.7-meter second stage and a reduced diameter third stage. Performance numbers for this vehicle version vary widely in different source documents and its existence beyond models and presentations has not yet been proven.

According to Chinese media reports, KT-2 was designed for commercial operation and as a highly responsive launcher with mobile launch capability.

The maiden launch of the KT-2 booster lifted the Tiankun-1 satellite into orbit. TK-1, the New Technology Experimental Satellite, reportedly carries a remote sensing payload and aims to demonstrate a new small satellite platform developed by the second bureau of CASIC. Development of CASIC’s first satellite started in March 2014 and its mission will be filled with a number of validation tasks to demonstrate the spacecraft platform and its integrated electronics and communications system as well as the remote sensing payload. According to CASIC, the TK-1 platform can be outfitted with remote sensing payloads sensitive to visible, infrared and microwave radiation.

Based on its insertion orbit, the satellite is looking at a relatively short orbital life if it has no onboard propulsion system.

KT-2 joins a pair of operational solid-fueled launchers developed in China – the Kuaizhou-1/1A quick-response launch vehicle that made its first commercial flight earlier this year and the Long March-11 that has flown successfully in 2015 and ’16, capable of lifting 350 Kilograms into Sun Synchronous Orbit. Another all-solid rocket set for its debut later this year is the Kuaizhou-11 that has a reported SSO capability of 1,000 Kilograms and aims to achieve a payload cost of $10,000 per Kilogram to make it a serious competitor on the international launch market.

The Jiuquan Satellite Launch Center which is also known as Shuang Cheng Tze launch center was China’s first launch facility being established in 1958. It is located in the Gobi Desert about 1,600 Kilometers from Beijing and hosts a pair of large Launch Complexes for the Long March 2 and 4 rocket variants with ancillary launch areas for solid-fueled vehicles like the Kuaizhou series.