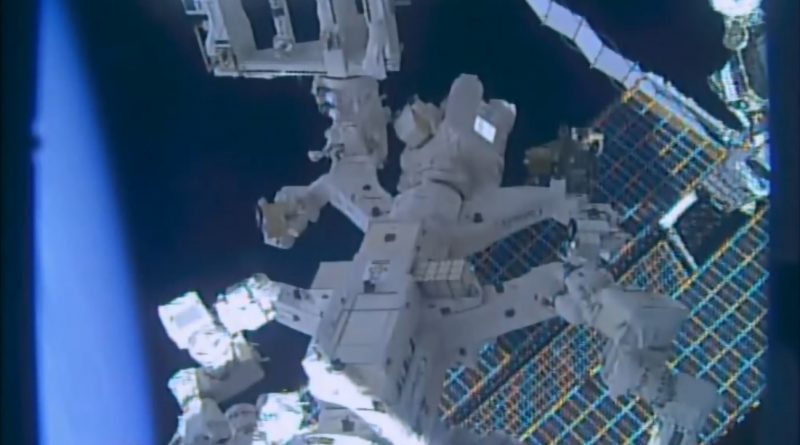 The Dragon SpX-10 spacecraft arrived at the Space Station last Thursday, delivering 2,490 Kilograms of cargo divided in 1,530 Kilograms of pressurized cargo delivered inside the Dragon spacecraft and 960kg of external cargo facilitated inside the spacecraft’s Trunk Section. For SpX-10, the trunk facilitated three components: the STP-H5 pallet hosting a total of 13 experiments, the SAGE-III atmospheric sensing instrument and the Nadir-Viewing Platform required to install SAGE in an Earth-pointed position.


While external cargo operations are just getting underway, internal cargo transfers of delivered items to the Space Station are already complete with the crew making extremely quick work to unload the Dragon from the moment its hatch was opened on February 23. A number of experiments, including the fourth Rodent Research study, will be completed while Dragon is berthed to ISS and placed back aboard the vehicle after completion for a swift return to Earth. Loading of return items is expected to pick up in the second half of March.

Robotics picked up back on Saturday with re-positioning of the robotic arm and the typical video survey of the trunk to ensure all payloads were in good shape after their ride to space atop a Falcon 9 rocket. Dextre grappled the STP-H5 payload and extracted it from the trunk followed by a handoff to Dextre’s Arm 2 that could deliver heater power to the payload while in transit to its eventual position on Express Logistics Carrier 1 (ELC-1).

Dextre was then stowed to allow Canadarm2 to walk-off to the Mobile Base System followed by re-grapple of the SPDM and a Mobile Transporter translation from Worksite 6 to WS7 so that the robots could begin work at ELC-1.

Sunday’s operations included the removal of OPALS, the Optical Payload for Lasercom Science, from ELC-1 and its temp-stowage on the Enhanced ORU Temporary Platform (EOTP) on the Dextre robot. STP-H5 was handed from Arm 2 to Arm 1 for installation via that arm’s ORU Tool Changeout Mechanism. This was followed on Monday by the installation of STP-H5 on ELC-1 via its Flight Releasable Attachment Mechanism. Activation of STP-H5 in its new location was confirmed successful and the Mobile Transporter went back to WS6 where it was safed in readiness to resume robotics at the end of the week.

OPALS will eventually be installed inside Dragon’s trunk section for disposal after a three-year stay on the Space Station, delivered by the Dragon SpX-3 spacecraft back in 2014 for a short-duration demonstration mission of four months, validating technology for high-data-rate laser communications between spacecraft and ground stations. Over the course of its mission OPALS attempted 26 downlink sessions of which 18 were declared completely successful, providing a number of lessons for the improvement of the technology before introduction into operational service.

The Space Test Program – Houston 5 payload belongs to a NASA/DoD program dedicated to flying small payloads loaded with different technical and other demonstrations to space to further the development, evaluation and advancement of new technologies for the future of spaceflight. A number of STP payloads have already been flown in the past including Department of Defense, university and NASA experiments.

The next act of robotic ops will be the installation of the SAGE III payload on Express Logistics Carrier 4 from where it will keep a close eye on Earth’s atmosphere to track ozone and aerosol variation over an extended period of time. Setup operations picked up Wednesday night with another base change of the SSRMS before picking up Dextre again to extract the SAGE III payload and its Nadir Viewing Platform on Friday ahead of installation over the weekend.

External cargo operations will wrap up with the installation of OPALS in Dragon’s trunk, to be joined by a no-longer-needed Flight Support Equipment component of the MISSE (Materials ISS Experiment) and the Robotic Refueling Mission payload that was involved in two large demonstration activities from 2013 to 2015 for robotic servicing and refueling of satellites in orbit.