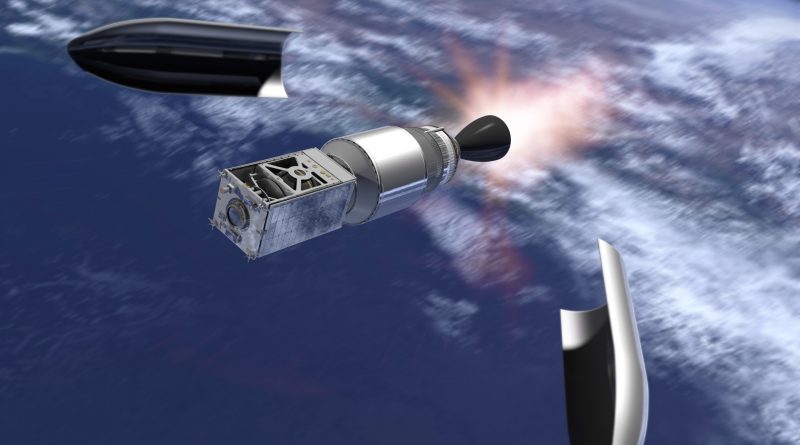 Virgin’s LauncherOne air-launched space rocket is now operated under its own company, Virgin Orbit, the firm announced on Thursday. Virgin Orbit will be tasked with the development, manufacture and operation of LauncherOne, hoped to become a prime contender on the small satellite launch market.

“I’m thrilled that our small satellite launch service has now progressed to the point it merits the formation of its own company,” said Virgin Group Founder Sir Richard Branson. Virgin Group’s Galactic Ventures now includes three companies – Virgin Galactic as the operator of SpaceShipTwo that will enable humans to travel to the edge of space and back, The Spaceship Company as the manufacturing arm in charge of SpaceShipTwo production, and finally Virgin Orbit operating the LauncherOne project.

Giving LauncherOne its own spin-off company places primary focus on putting the LauncherOne project into a posture to “offer flexible, routine and low cost launch services for small satellites.”


The president of the newly formed company will be Dan Hart who worked for 34 years at Boeing where he was responsible for the company’s satellite programs for the U.S. government. “As Boeing’s Vice President of Government Satellite Systems, he led efforts in all phases of the aerospace product life cycle, from R&D through development, production and flight operations, and has supported numerous space launch missions across human spaceflight, satellite development, launch vehicle development, and missile defense,” Virgin said in a statement.

As part of the formation of Virgin Orbit, over 200 employees at the Long Beach manufacturing facility are transitioning from Virgin Galactic to the new company with new hires part of the near-term business plan.

Concepts for LauncherOne were first released in 2012 and the project has progressed through major stages of development in recent years and is now in a final testing phase ahead of a flight test program. First conceived to use the same WhiteKnightTwo carrier aircraft as SpaceShipTwo, LauncherOne upgraded to a modified Boeing 747 acting as its airborne launch pad for increased performance of the two-stage rocket. The ‘Cosmic Girl,’ as the aircraft is known, is currently being outfitted for its role in the LauncherOne program and will be operational within a period of months.

LauncherOne itself is on track for its inaugural launch toward the end of the year, having checked off a number of critical tests including “long duration, full thrust firings of both of LauncherOne’s engines, cryogenic tank tests, and hardware-in-the-loop testing of the vehicle’s avionics.”

LauncherOne is capable of placing over 200 Kilograms into a Sun Synchronous Orbit and slightly more into Low Earth Orbit, making it suitable for the deployment of small Earth-imaging satellites, communications satellites and cluster launches for CubeSat operators. Back in 2012, Virgin advertised LauncherOne at a launch price of under $10 million per mission.

The two-stage rocket primarily uses composite structures that give it a low inert mass to maximize performance and both stages rely on Rocket Propellant-1 and Liquid Oxygen as their propellant combination. The 1.8-meter diameter first stage is powered by Virgin’s NewtonThree, a 327kN pump-fed engine while the 1.5m second stage hosts a restartable, 22kN NewtonFour, responsible for lifting payloads into orbit.

LauncherOne’s primary base of operations will be the Mojave Air and Spaceport, but certain missions will require launches from other facilities including the Shuttle Landing Facility (SLF) at the Kennedy Space Center and NASA’s Wallops Flight Facility.

LauncherOne holds firm contracts for a CubeSat Mission operated by NASA’s Launch Services Program and over three dozen launches for the OneWeb Internet Satellite System aiming to place more than 800 satellites into orbit before the end of the decade to deliver high-speed Internet to several hundred million potential users. Sky and Space Global has also signed a launch contract with Virgin for an unknown number of missions in support of the company’s CubeSat communications network.

Last December’s test flights marked the first for the VSS Unity after a year of rebuilding following the fatal testing accident of the VSS Enterprise in 2014 that killed the ship’s co-pilot and set back the test program by two years.

VSS Unity entered testing last September with a series of captive carry flights to study the aerodynamic behavior of the new craft in various flight environments before upgrading to free flight testing. The number of unpowered glide tests is not set in stone, but Virgin officials said they expect around ten such tests before VSS Units will begin powered flight tests later in 2017. Virgin Galactic has not set a firm plan for the test flights to allow engineers to set the pace and collect the necessary data to ensure no issues come up once SpaceShipTwo proceeds into rocket-powered flights.

At the controls for last week’s test was Virgin Galactic’s chief test pilot Dave Mackay with former NASA Shuttle Commander CJ Sturckow in the right seat. The test was dedicated to continue evaluating the craft’s performance in the low-speed regime of its typical flight profile, also demonstrating different abort modes available to the crew during operational missions.

Virgin Galactic has already lined up around 700 customers that are ready to pay up to $250,000 for a flight to the edge of space to witness the sight of the curvature of Earth and its thin atmosphere in a flight lasting about two and a half fours from takeoff to landing – of which only a few minutes would be spent in microgravity.