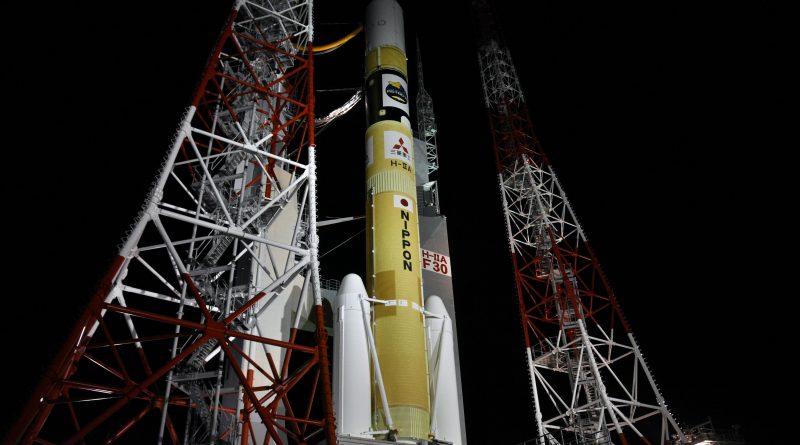 Japan is preparing an H-IIA rocket for liftoff on Thursday with the second Quasi-Zenith Satellite to help augment Global Positioning System services over the Japanese Islands and the Asia Pacific Region by increasing GPS availability and accuracy. The launch of QZS-2 opens a push to establish the operational four-satellite constellation by the end of this year with two more satellites headed uphill on H-IIA rockets later in 2017.

Liftoff from the picturesque Tanegashima Space Center is planned at 0:17 UTC on Thursday, 9:17 a.m. local time on the southern tip of the country from where H-IIA will head south-east across the Pacific Ocean to accomplish a high-energy injection into an elliptical transfer orbit. H-IIA will drop its two Solid Rocket Boosters less than two minutes into the flight and fire its LE-7A engine for six and a half minutes before the LE-5B engine of the second stage takes over for a pair of burns. The 4,100-Kilogram QZS-2 satellite will be sent on its way 28 minutes after liftoff.


The Quasi-Zenith Satellite System (QZSS) entered development in 2002 with the aim of increasing the availability of GPS navigation services for the Japanese territory, in particular the country’s urban canyons where buildings block all GPS satellites that are not at high elevation, potentially causing interruptions in service. To that end, QZSS proposed to establish a three-satellite constellation in a specialized orbit that places one satellite directly over Japan at any given time.


The GPS augmentation approach followed by QZSS is similar to that of the U.S. Wide Area Augmentation System in that a number of ground stations monitor variability in GPS signals – caused by clock errors and ionospheric delay – and provide correction messages to a high-altitude satellite that immediately relays them to augmentation-enabled receivers on the ground to increase location accuracy to around one meter.

The first QZS satellite launched atop an H-IIA rocket in October 2010 and completed several months of signal characterization and fine tuning before all signals were moved into active operation in July 2011. Studies have shown that GPS accuracy has been improved by a factor of up to 2.5 when QZS-1 is overhead and transmitting augmentation code – clearing the system to move from a proof-of-concept into operational services.

After successful demonstration of the QZSS principle, JAXA ordered three satellites from Mitsubishi Electric in 2013 for a total of $526 million, expanding the planned three-satellite constellation with another satellite that will reside in Geostationary Orbit and provide augmentation services for the entire Asia-Pacific Region.

Based on the DS-2000 satellite platform, QZS-2 stands 6.5 meters tall and weighs in at 4,000 Kilograms, comprising a 1,180-Kilogram satellite platform, 370kg navigation payload and 2,450kg of maneuvering propellant. At the heart of the satellite sits a pair of redundant Rubidium Atomic Clocks that provide the ultra-stable timing needed in the generation of regular GPS navigation messages. Japan received clearance from the U.S. in 2006 to use the GPS navigation bands as well as the L1-SAIF augmentation signal architecture.

QZS-4 will be an identical carbon copy of the second satellite and complete the three-satellite constellation in what is known as a Tundra orbit that allows one of the satellites to be almost directly overhead (zenith) as seen from a user in Japan. The QZS-3 satellite will be slightly heavier, weighing in at 4,700 Kilograms, and aiming for a 15-year mission in the traditional Geostationary Orbit from where it can relay augmentation messages to a large area.

GPS augmentation with sub-meter or meter-accuracy is primarily used in aviation but also finds application on the ground for mapping and agriculture. The QZSS constellation is also used to examine the behavior of atomic clocks in space.

QZSS itself will be fully operational by mid-2018 and JAXA plans to add another three satellites in the 2020s to further increase GPS availability in Japan’s urban canyons.


The launch of QZS-2 will be the third flight of the H-II rocket family in 2017, having already lifted the DSN-2 defence communications satellite and IGS Radar-5 reconnaissance craft.

Rollout of the 53-meter tall H-IIA launcher is expected at 9:30 UTC on Wednesday, 18:30 local for a 500-meter trip from the Vehicle Assembly Building to Launch Pad 1 at the Yoshinobu Launch Complex. Meteorologists are predicting rain through the day on Wednesday but have no concerns for the evening rollout and overnight launch countdown.

Flying in its 202 configuration, H-IIA consists of a two-stage stack measuring four meters in diameter plus two SRB-A3 Solid Rocket Boosters on the first stage, generating the kick needed to send QZS-2 toward its high-energy orbit. H-IIA 202 has a launch mass of 285,000 Kilograms and can lift up to 4,100 Kilograms into a Geostationary Transfer Orbit.

Following activation and checkouts of the rocket, teams will press into propellant loading around seven hours and 45 minutes before the opening of the day’s launch window, pumping 120 metric tons of -183°C Liquid Oxygen and -253°C Liquid Hydrogen into the two cryogenic rocket stages.

Computers will assume control of the countdown at X-4.5 minutes to take H-IIA through final preparatory steps such as the pressurization of tanks, the transition to internal power and the activation of the Flight Control System. The first stage’s LE-7A engine will come to life at X-5.2 seconds for throttle-up and a brief moment of performance monitoring before the twin boosters ignite and catapult the rocket off the ground.

Liftoff is precisely timed for 0:17:46 UTC and H-IIA will race uphill with a total thrust of 600 metric-ton-force. The twin boosters deliver the majority of thrust as the H-IIA climbs away from its sea-side launch pad with the usual scream unique to Japan’s H-II rockets.

H-IIA will make a brief vertical climb before executing its roll and pitch program to achieve the planned ascent trajectory – flying south-east for a trip across the Pacific. Unlike a typical geostationary delivery that aims to reduce orbital inclination, H-IIA will be targeting a higher inclination than its launch site as the QZS constellation satellites operate in an orbit inclined 44 degrees to either side of the equator.

The two boosters fly in a special configuration with a shorter burn time, but higher thrust – optimized for a GTO-type mission profile. Each of the twin boosters will be delivering 255,000-Kilogram force of thrust over the course of a 98-second burn to accelerate the launcher to a speed of 1.5 Kilometers per second.

The declining pressure on the boosters will be detected via sensors and separation will be commanded at T+1 minute and 48 seconds when H-IIA will be 54 Kilometers in altitude. The 15-meter long boosters will be jettisoned pyrotechnically, swinging away from the rocket along their thrust struts to ensure a clean separation.

With the boosters gone, H-IIA will rely on its LE-7A for another five minutes, consuming 260kg of cryogenics per second to boost the vehicle into space with a vacuum thrust of 109,300 Kilogram-force.

The protective payload fairing will be separated four minutes and ten seconds into the flight when H-IIA will have reached an altitude of 151 Kilometers where aerodynamic forces are no longer a concern for the satellite.

The first stage will continue operation until T+6 minutes and 38 seconds, boosting the stack to a velocity of 5.2 Kilometers per second. Stage separation occurs eight seconds after cutoff at an altitude of 239 Kilometers as pyrotechnics severe the connection between the stages and springs push the 37-meter long Core Stage away.

The LE-5B engine of the second stage will ignite six seconds after stage separation, soaring to a thrust of 13,970 Kilogram-force for a burn of five minutes and 42 seconds to lift the stack into a Low Earth Parking Orbit. At the conclusion of the first burn of the second stage, the stack will enter a coast phase of exactly 12 minutes to set up the proper insertion conditions for the second burn that aims to significantly boost the high point of the orbit.

Re-start of the LE-5B is expected 24 minutes and 34 seconds into the mission and the engine will be tasked with increasing the vehicle’s speed by 2.5 Kilometers per second over the course of a firing of three minutes. QZS-2 is targeting an orbit of 250 by 36,140 Kilometers at an inclination of 31.9 degrees from where it will use its own engine to reach the operational QZS orbit of 32,600 by 38,950 Kilometers, inclined 44 degrees with the high point positioned over Japan to allow the satellite to spend the majority of its orbit at an elevation of 60° or higher as seen from Japan.

Loaded springs will send QZS-2 on its way 28 minutes and 24 seconds into the mission, marking the start of its first steps in orbit that include a stabilization of its orientation, the start of communications with the ground and a series of health checks. Over the course of several days, the satellite will fire its main engine to take its position in the QZS constellation at the proper spacing to QZS-1.