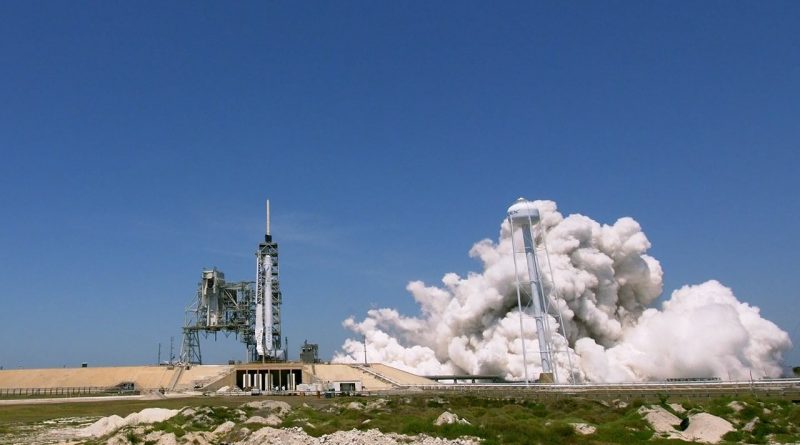 A SpaceX Falcon 9 rocket – still missing its Dragon spacecraft – rumbled to life for a brief moment on Sunday atop its Kennedy Space Center launch pad for a hold-down engine test to clear the way for liftoff as early as Thursday on the company’s second ISS resupply mission of 2017.

Falcon 9 is targeting liftoff at 21:55 UTC on Thursday for a ten-minute ride into orbit with the Dragon SpX-11 spacecraft headed to the International Space Station with nearly 2.8 metric tons of cargo for the orbiting laboratory, including three large external payloads and a group of 40 mice that will participate in a drug study looking at bone mass restoration in space – a potential breakthrough for future space flights and osteoporosis treatment on Earth.


The Dragon SpX-11 mission will see the first re-flight of a Dragon capsule as SpaceX looks to close down the Dragon 1 production line to fully focus on the Dragon 2 spacecraft that will carry crews to the Space Station as early as next year and take over cargo missions from the original Dragons when NASA’s Commercial Resupply Services 2 flights begin after SpX-20.

Dragon 6, as the vehicle is known, visited ISS in 2014 on the 34-day SpX-4 mission and underwent some refurbishment after its return to the ground, primarily focused on avionics and electrical systems with the pressure vessel remaining the same from SpX-4 to SpX-11.

Per SpaceX’s contract with NASA, the company was to use a new Dragon for all of the resupply missions, however, SpaceX from the beginning had Dragon designed for multiple mission cycles and worked with NASA to determine what would be needed to get approval from the agency for re-use missions. Provided the SpX-11 mission goes off without a hitch, SpaceX plans to re-use Dragons through SpX-20 and shut down production of new Dragon 1 spacecraft.


The Dragon 2 vehicle will be available in a crew and cargo version, offering a greater volume for cargo headed to the Station which, coupled with the increased performance of the upcoming Falcon 9 Block 5 vehicle, will allow a greater cargo upmass for each mission. Dragon 2 will also use a novel propulsive landing on a concrete pad on land as opposed to Dragon’s current splashdown landing architecture, allowing scientists to access cargo right after landing. Crew Dragons will start with ocean-based landings before cargo missions have built up confidence in the powered landing scheme.

Coming on the heels of the successful Inmarsat 5-F4 launch on May 15, SpaceX continues with a steady pace at the company’s Launch Complex 39A launch pad, currently the only East Coast launch site for Falcon 9 until SLC-40 can be repaired after last September’s testing mishap. Since the beginning of this year, SpaceX was able to establish a stable two-week launch cadence at LC-39A with delays mainly attributed to payload readiness.

The Static Fire Test was initially planned for Saturday, but was then advanced to Friday when technical trouble with a ground system part caused the delay to Sunday with Falcon 9 reaching its launch pad in the pre-dawn hours. As with every Falcon 9 mission, the launcher undergoes a series of critical tests before reaching the launch pad for liftoff, specifically an acceptance test of each Merlin engine used on the rocket, a hold-down firing of both stages at the company’s Texas test site and the pre-launch Static Fire Test – all designed to uncover any issues with the rocket as early as possible in the processing flow to avoid impacts to launch.

This mission is using a new first stage, as dictated by NASA’s CRS contract as re-use vehicles are not yet certified to carry out NASA and U.S. Air Force missions. Booster #1035 was spotted on the test stand in McGregor in mid-March before being shipped to Cape Canaveral in the second half of April to meet its second stage.


Entering an abbreviated countdown operation for the Static Fire, Falcon 9 went through a series of checkouts before teams cleared the pad for the propellant loading operation, picking up 70 minutes before the planned test time with Rocket Propellant 1 loading before sub-cooled Liquid Oxygen began flowing at T-45 minutes. While being loaded with over 500 metric tons of propellant, Falcon 9 completed a fully automated set of preparations including exercises of it engine valves, the chilldown of the main engines, transition to internal power and handoff to Falcon’s computers.

Falcon 9 came to life at 16:00 UTC, 12 p.m. local time on Sunday as the nine Merlin 1D engines briefly soared to a collective thrust of nearly 700 metric-ton-force. The firing was expected to last 3.5 seconds before shutdown of the engines and safing of the launch vehicle.

Per the standard procedure, teams immediately went through a quick assessment of telemetry to ensure the Static Fire achieved its planned duration and all necessary performance parameters were captured before providing the green light for de-tanking the rocket.

Fire crews were dispatched to a wildfire near LC-39A caused by the Falcon 9 with helicopters completing multiple water drops to contain the 1.5-hectare blaze located on a small island near the launch site.

Lowered to a horizontal position, Falcon 9 returns to the Integration Facility for the installation of the Dragon spacecraft that is already holding most of the cargo it will deliver to the Space Station. A number of late load items such as time-critical experiments and fresh food for the crew will be loaded inside 24 hours to launch via Dragon’s late cargo load feature, allowing items to be placed into the vehicle through a mobile white room rolled up to the launch pad.

The two Rodent Transporters, hosting a total of 40 mice, plus a Fruit Fly Lab are part of the late cargo load as only two of several dozen experiments supported by the SpX-11 mission.

Pending an on-time liftoff Thursday afternoon, Dragon will be inbound to ISS on June 4 in a mission choreographed around the planned June 2 homecoming of the Soyuz MS-03 spacecraft with ISS crew members Oleg Novitskiy and Thomas Pesquet. Return of the Dragon is currently planned for July 2 via a parachute-assisted splashdown landing in the Pacific Ocean.

SpaceX plans to return Booster #1035 to Cape Canaveral’s Landing Zone 1 after dispatching the rocket’s second stage and Dragon spacecraft on their way toward orbit to be re-used on a later mission, possibly as early as later this year.

The mission marks SpaceX’s seventh launch of the year after five successful missions from Florida and January’s return-to-flight launch from Vandenberg.