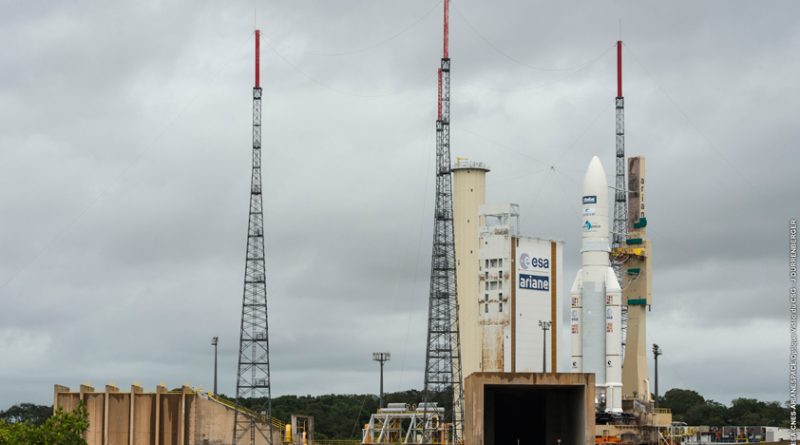 Europe’s Ariane 5 workhorse reached its launch pad on the edge of the Amazon jungle on Wednesday in preparation for a Thursday night liftoff with a pair of landmark communications satellites from the United States and Europe.

Hidden under the protective payload fairing of the 55-meter tall rocket are the ViaSat-2 and Eutelsat 172B communications satellites, both marking milestone achievements for the respective manufacturers and operators. Known as VA237 in Arianespace’s numbering system of Ariane 5 flights, the mission has a one-hour launch window opening at 23:45 UTC and Ariane 5 will be in operation for 41 minutes to send its two high-profile passengers into a highly-elliptical Geostationary Transfer Orbit.

ViaSat-2, built by Boeing, will become the highest-throughput satellite ever launched to support ViaSat’s goal of connecting millions of homes, businesses and airline passengers to the Internet. Eutelsat 172B is the first all-electric satellite launched by Ariane 5 and introduces a new variant of the Airbus Defence and Space Eurostar-3000 satellite platform, responding to a trend toward hybrid and all-electric satellites.


ViaSat, headquartered in Carlsbad, California, has become one of the world’s leading telecommunications providers via a fleet of satellites parked in Geostationary Orbit beaming high-speed Internet to households, small businesses, airline passengers and deep sea vessels. Initially leading development for satellite Internet modems and IP terminals, ViaSat acquired two satellites in 2009 and launched its first craft in 2011 which, at the time, set a new record for total data throughput at 140 Gigabits per second.

ViaSat-2 will take the company’s vision of making the Internet available and affordable to the next level, doubling the first satellite’s capacity and increasing its coverage area by a factor of seven. Built by Boeing based on the high-power version of the BSS-702 satellite platform, the $625 million ViaSat-2 weighs in at 6,418 Kilograms and hosts a powerful Ka-Band package capable of a data throughput of 300Gbit/s with coverage spanning across North America and much of the Atlantic Ocean.

ViaSat’s ultimate goal of global Internet coverage will be realized by the ViaSat-3 constellation of three Terabit-per-second satellites currently in production for launch in late 2019 or 2020.


The ViaSat-2 spacecraft was originally booked on a SpaceX Falcon Heavy rocket for liftoff in late 2016, but the company decided to switch to Ariane 5 after it became clear the project would not be able to stay anywhere close to its original schedule due to persistent delays to Falcon Heavy’s debut mission.

The lower-berth passenger of the VA237 mission is Eutelsat 172B, built by Airbus Defence and Space based on the latest evolution of the Eurostar-3000 platform known as the EOR for Electric Orbit Raising. It is the first all-electric satellite delivered by Airbus DS and the first to be launched atop an Ariane 5.

As ion propulsion matured as an operational propulsion technology, numerous satellite manufacturers incorporated ion thrusters in their satellite platforms to extend the operational lives of the spacecraft beyond what is possible with chemical propulsion alone. All-electric satellites are a relatively new trend, but provide an attractive solution given their lower launch cost plus higher mass budget available for the communications package.

Normally, E3000 satellites ride in the upper payload slot on the Ariane 5 as they weigh around five or six metric tons. Relying purely on ion propulsion, the satellite’s launch mass reduces to 3.5 metric tons, allowing it to take the cheaper lower slot on the launch vehicle. Airbus currently has orders for six E3000EOR satellites from Inmarsat, SES, Eutelsat and the French Government.

Joining Eutelsat 172A, the satellite will provide coverage over a large area from from the U.S. West Coast throughout the Asia-Pacific Region including focused beams on Australia – creating a coverage zone from LA to Beijing and Anchorage to Perth. Services supported by the satellite cover the entire palette of telecommunications needs – in-flight and maritime connectivity via the HTS transponders, cellular backhaul, corporate networks, video distribution and government services.


The VA237 is one of three quick-fire Ariane 5 missions planned in May and June to allow Arianespace to catch up with its planned manifest of a dozen orbital launches in 2017 after missions were held up for nearly two months by a general strike in French Guiana that caused operations at the spaceport to come to a halt in March and April. A planned gap of launches in May and early June is being used to fully catch up with the planned manifest.

Preparations for the VA237 mission started well before the strikes when the components of the Ariane 5 rocket arrived on one of two sea-going vessels employed by Arianespace to ship rocket parts from Europe to South America. The assembled Ariane 5 rocket was kept safe in the Vehicle Assembly Building during the social unrest while another Ariane 5, already with its payloads on top, endured the delay inside the Final Assembly Building.

Eutelsat 172B in particular suffered impacts from the strike, arriving in French Guiana in late March and spending several days on the tarmac at Cayenne Airport with no clear path to the space center. The satellite was flown back to Europe and returned to French Guiana one month later to enter its final processing flow.

Ariane 5 was transferred to the Final Assembly Building in mid-May to meet its two passengers – Eutelsat 172B taking the lower slot atop the second stage and under the Sylda while ViaSat-2 is hosted atop the Sylda payload adapter. Final mission simulations and arming of the rocket was completed over the weekend and managers convened for the Launch Readiness Review on Tuesday, clearing the rocket for rollout to the ELA-3 launch site.

Ariane 5 emerged from the Final Assembly Building on Wednesday for a 2.7-Kilometer trip over to the ELA-3 launch pad where the rocket was carefully placed atop its launch table for the final 24-hour launch preparation process. Countdown operations will formally begin at 12:22 UTC, eleven hours and 23 minutes before the day’s hour-long launch window opens at 8:45 p.m. local time.

The VA237 mission is carrying a total payload mass of 10,865 Kilograms into Geostationary Transfer Orbit, making it one of the heavier hauls for the workhorse launcher.

Upon ignition of the twin boosters, Ariane 5 will jump off its launch pad with a thrust of 1,420 metric ton-force, balancing in a vertical position for six seconds before initiating the pitch and roll maneuvers that aligns the rocket with its due easterly departure path across the Atlantic Ocean. Ariane will pass the speed of sound 49 seconds into the flight followed twenty seconds later by Maximum Dynamic Pressure.

The 31.6-meter long boosters will finish their job two minutes and 21 seconds into the mission via a pyrotechnic separation from the core stage which will continue uphill powered by the single Vulcain 2 main engine, guzzling down 300 Kilograms of cryogenics every second of flight.

Three minutes and 22 seconds into the launch, Ariane 5 will be sufficiently high in altitude to drop its two fairing halves, revealing the dual-payload stack for the rest of the journey into orbit. The core stage will shut down at T+8 minutes and 56 seconds and separate from the upper stage six seconds later to clear the way for ignition of the 62.7-Kilonewton HM-7B engine at T+9:06.

The upper stage will fire for 16 minutes and 20 seconds to boost the vehicle’s speed to 9.4 Kilometers per second in order to reach the desired elliptical orbit of 250 by 35,706 Kilometers, inclined 6 degrees. After injection, 25 minutes into the flight, Stage 2 will employ its cold gas thrusters for an elaborate orbital dance – separating ViaSat-2 at T+29 minutes, dropping off the Sylda at T+32 minutes and sending off Eutelsat 172B at T+42 minutes – all headed into slightly different directions to ensure no close encounters in the hours and days after launch.

Thursday’s launch will be the 93rd flight of the Ariane 5 rocket, the 62nd in the ECA configuration. Arianespace plans to follow up on the VA237 mission within four weeks with Ariane flight VA238 carrying the Inmarsat-S/HellasSat-3 and GSAT-17 satellites into orbit.