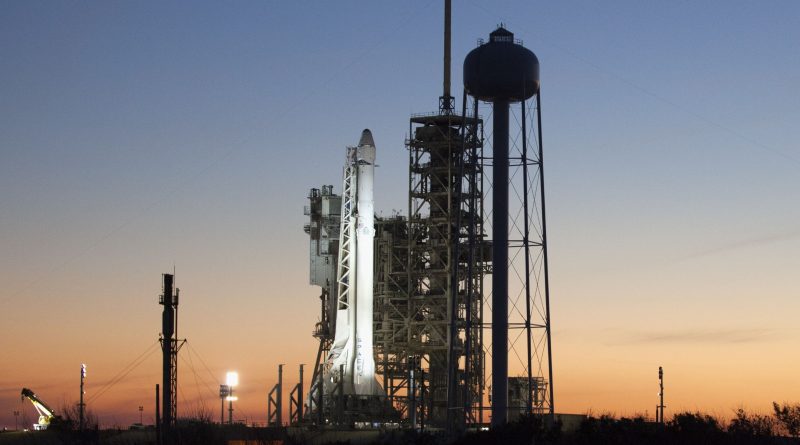 SpaceX’s Falcon 9 rocket returned to its Kennedy Space Center Launch Pad on Wednesday in preparation for liftoff on Thursday with the Dragon SpX-11 spacecraft headed to the International Space Station with 2.7 metric tons of cargo including three high-profile external payloads dedicated to exploring the inner workings of ultra-dense neutron stars, demonstrate a roll-out solar array for future satellites and provide ISS with a new Earth-pointed instrument platform.

The 65-meter long Falcon 9 rocket was wheeled from its Integration Facility to the launch pad at Complex 39A at noon on Wednesday. It remained horizontal for the late cargo load procedure on the Dragon which involved time critical experiments, a group of 40 mice, a fruit fly lab and fresh food for the Station’s crew.

Liftoff is planned for 21:55 UTC, 5:55 p.m. EDT on Thursday on a ten-minute ride into orbit for the Dragon and an eight-minute round trip for the rocket’s first stage aiming for a rocket-powered landing at Cape Canaveral’s Landing Zone-1.


Thursday’s Launch marks the 100th mission taking off from the historic Launch Complex 39A that hosted a dozen Saturn V launches, 82 Space Shuttle missions and five flights of SpaceX’s Falcon 9 after NASA handed the complex over to SpaceX.

Thundering off, Falcon 9 will be headed north-east to deliver Dragon into the orbital plane of the International Space Station, firing the first stage for two minutes and 22 seconds to accelerate to a speed of around 1.6 Kilometers per second with the MVac-powered second stage tasked with boosting Dragon to orbital velocity via a six-and-a-half-minute engine burn.

Dragon will be deployed ten minutes after launch at which point the rocket’s 47-meter tall first stage should already be resting on its four landing legs if the propulsive return sequence went according to plan – adding another booster to SpaceX’s inventory of flight-proven stages waiting for a re-flight mission. The Dragon is expected to link up with the Space Station on Sunday, taking a slightly longer approach to avoid interfering with the departure of Soyuz MS-03 that will return to Earth on Friday with two ISS crew members.


Falcon 9 conducted a successful Static Fire Test on Sunday, briefly firing up its nine Merlin 1D first stage engines in a final end-to-end test of the assembled rocket and its ground systems prior to launch day. The two-stage rocket then went back to its Horizontal Integration Facility to meet the Dragon spacecraft that had already been loaded with the majority of cargo headed to ISS.

Once back at the launch pad, Falcon 9 remained in a horizontal position to allow NASA and SpaceX crews to access the Dragon through a Mobile White Room rolled up to the spacecraft. A unique feature of SpaceX’s cargo architecture is the ability to access the spacecraft for late cargo load the day before liftoff, allowing Dragon to ferry time-critical experiments to the Space Station.


In addition to 1,056 Kilograms of science experiment hardware, Dragon is also lifting 199kg of maintenance hardware for the various ISS systems, 242kg of crew supplies including food and hygiene articles, 27kg of computer resources and 56kg of spacewalk equipment.

The Dragon SpX-11 mission marks the first re-flight of a Dragon Spacecraft, involving the sixth production Dragon (C106) that flew a 34-day mission back in 2014 as part of SpaceX’s fourth operational resupply mission to ISS. Dragon has been designed to be re-usable, but NASA’s Commercial Resupply Services contract specified SpaceX to use a new Dragon for each mission, requiring extensive work between SpaceX and NASA to determine what would be needed for a re-flight mission.

Pending a successful re-flight demonstration, SpaceX plans to use flown Dragon spacecraft to finish the CRS-1 missions that run through SpX-20, allowing the company to focus on production of the Dragon 2 spacecraft that will fly crew and cargo to ISS starting in 2018.

Working towards a Thursday afternoon liftoff from Florida’s Space Coast, SpaceX is looking at 70% odds of favorable weather conditions with anvil and cumulus clouds cited as the primary concerns for the day’s instantaneous launch opportunity. Storms are expected to build inland from the spaceport, but upper level winds from the north-west may push clouds back toward the spaceport, creating a slight risk of launch criteria violations. Disturbed weather is forecast to move closer to the space center in case the launch has to be delayed to June 3.

Falcon 9’s lengthy countdown operation will pick up Thursday morning, local time, with the activation of the rocket for several hours of detailed checkouts and setup steps while engineers clear out the launch pad following final close-out operations. Provided all systems check out & weather cooperates, controllers will provide a GO for Falcon 9’s automatic countdown sequencer to kick in at T-70 minutes to take the vehicle through the complex tanking sequence.

As the countdown’s automatic sequence starts, Falcon 9 will begin receiving chilled Rocket Propellant 1 while also chilling down its oxidizer tanks before the sub-cooled Liquid Oxygen begins flowing at T-45 minutes. All in all, Falcon 9 will receive over 500 metric tons of propellants with fueling closing out in the last five minutes of the countdown to ensure the densified propellants remain as cold as possible.

Dragon will make its transition to internal power before the Falcon 9 begins a fast-paced sequence in the last seven countdown minutes to chill down its nine Merlin 1D main engines, exercise the engine valves and steering actuators, switch to battery power and complete a last set of pre-programmed checks.

A final GO from the Launch Director and Eastern Range comes in the last three minutes of the count and Falcon 9 takes over control at the one-minute mark, overseeing the pressurization of tanks.

Falcon 9 will come to life at T-3 seconds when the characteristic green flame of the rocket’s igniter mixture will emerge from the engines to initiate the combustion process. Soaring to a total thrust of nearly 700 metric ton-force, Falcon 9 will take flight when hold-downs release the rocket after a brief check of engine performance. The nine Merlin 1D engines will gimbal to hold the rocket in a vertical posture to clear the 106-meter launch tower left behind by the Shuttle program before pitching and rolling onto the north-easterly launch trajectory to drop Dragon off in the Station’s orbital plane.

Powering away from the Cape, Falcon 9 will push through the sound barrier just after T+1-minute followed seconds later by Maximum Dynamic Pressure for which the rocket will momentarily throttle back its engines.

The first stage will fire for two minutes and 22 seconds, tasked with accelerating the stack to a speed of over 1.6 Kilometers per second when handing off to the second stage. Pneumatic pushers are in charge of stage separation three seconds after MECO and the first stage will immediately fire up its cold gas thrusters to initiate the turn to an engines-first orientation for the boost-back maneuver.

While the first stage goes through the motions to reverse course, the MVac-powered second stage will soar to life two minutes and 32 seconds into the flight to head on toward orbit with a thrust of 95,000 Kilogram-force. Dragon will jettison its protective nose cap a little over three minutes into the mission when crossing 115 Kilometers in altitude where aerodynamic forces can no longer harm the Common Berthing Mechanism at the top end of the capsule.

With the second stage heading off to orbit, the booster will waste no time and fire up three of its Merlin 1D engines two minutes and 38 seconds after liftoff to make a full boost-back maneuver to reverse direction and head back toward Cape Canaveral, peaking over 150 Kilometers in altitude. After the 50-second boost-back burn is complete, the stage will once again re-orient in preparation for atmospheric entry and the four actuated grid fins will swing into their deployed configuration to provide steering during atmospheric descent.

The booster will re-light three engines six minutes and ten seconds after liftoff for around 15 seconds to hit the brakes prior to encountering the peak-heating portion of re-entry. Next, it will be up to the grid fins to maneuver the booster toward LZ-1, located around 15 Kilometers south of Falcon’s launch pad.

Ignition of the rocket’s center engine occurs just over thirty seconds before the planned touchdown at LZ-1, set for some heavy throttling to gently set the booster down on its four fold-out landing legs eight minutes after lifting off. Although not a mission success requirement, getting the booster back would enable SpaceX to add another flight-proven rocket to its inventory for re-flight later in the year, helping the company tackle a busy manifest of missions.

While the booster’s round-trip journey comes to an end, the second stage will be in the final phase of its six-minute and 48-second burn, safing its autonomous flight termination system and entering terminal guidance for an on-target injection into what is expected to be a 200 x 355-Kilometer orbit, inclined 51.6 degrees. The Dragon will be sent on its way exactly one minute after engine shutdown.

Drifting off on its three-day link-up with ISS, Dragon will begin breathing fire to stabilize its attitude before dropping its solar array fairings and deploying the two power-generating arrays at the T+12-minute mark.

Around 20 minutes after launch, observers in Western Europe will be able to see the Dragon spacecraft, Falcon 9 second stage and solar array covers traversing the night sky.

For Dragon, the mission begins with a multi-hour checkout campaign that includes the critical deployment of the GNC Bay Door to reveal Dragon’s navigation sensors and grapple fixture before the spacecraft begins a series of orbit-raising maneuvers to meet up with ISS on Sunday with capture expected around 14 UTC to mark the start of a month-long stay.

The Falcon 9 second stage will be tasked with a brief deorbit burn on its first orbit, targeting re-entry and debris splashdown in a long stretch of the Pacific Ocean between New Zealand and South America.