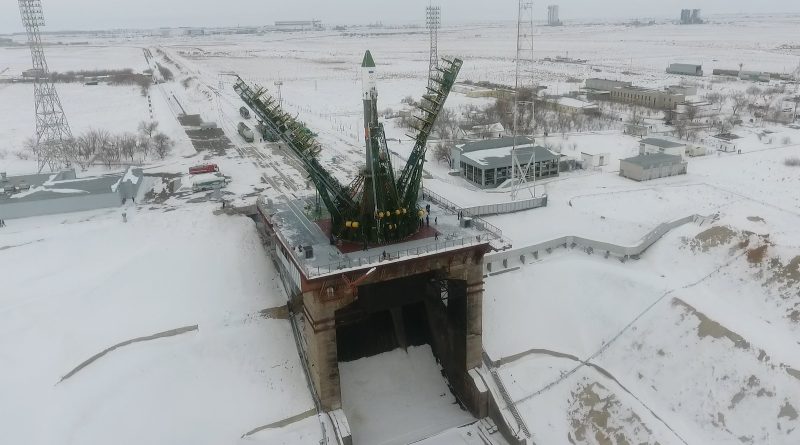 Russia’s final Soyuz U rocket rolled to its historic Baikonur Launch Pad on Monday to end a career of over four decades with what is hoped to be a successful Return to Flight mission on Wednesday, lifting off with the Progress MS-05 cargo spacecraft – the first Russian cargo delivery to ISS after December’s Soyuz U launch failure.

Progress MS-05, loaded with nearly two and a half metric tons of food, fuel and supplies, is aiming for liftoff at 5:58 UTC Wednesday morning, set for a nine-minute climb into orbit followed by a two-day rendezvous with the orbiting laboratory.

Soyuz U became the undisputed workhorse of the Soyuz rocket fleet in 1973, hauling cargo to Russia’s Space Stations, lifting crews into orbit and launching satellites to all types of orbits. Wednesday’s launch will mark the 786th Soyuz U mission, rounding out a very successful career over which the rocket maintained at success rate of 97.2%, making it one of the most reliable launchers.


Soyuz U holds the record for the longest operational life of an orbital rocket, the most launches performed by an orbital launch vehicle and the highest launch rate in a calendar year.

The retirement of the somewhat antiquated Soyuz U began looming on the horizon for the last decade as Russia introduced the modernized Soyuz 2 variants – hosting state-of-the-art digital flight control systems, an upgraded engine and featuring a number of structural improvements.

Soyuz 2-1A – the direct replacement for the Soyuz U – offers a slightly improved performance to carry more mass into orbit, and permits flexible mission profiles to be flown owed to the upgraded control systems.

The final Soyuz U rockets were ordered in 2014 and production finished in 2015 with the last rockets entering storage to be flown over the course of two years in a soft transition to Soyuz 2-1A that was set up to alternate between the older variant and its replacement in order to provide time to iron out any issues with the new launcher/spacecraft combination – a wise choice as became evident in April 2015 when the Progress M-27M spacecraft suffered severe damage due to unforeseen dynamics occurring between the modified third stage of the Soyuz 2-1A and the Progress craft at the moment of engine shutdown.

Although Soyuz U ranks as one of the most reliable rockets in history, its tenure was not without failures. Hopes for a gracious retirement of the Soyuz U were shattered in December when the penultimate vehicle, lifting Progress MS-04, encountered a failure during third stage flight.

Following its nighttime liftoff from Baikonur on December 1st, Soyuz was well on its way when, 382.4 seconds into its flight, all telemetry from the ascending rocket ceased – indicating something had gone wrong in an almost instantaneous fashion. Reports from South Siberia of fire in the sky and falling debris confirmed the Soyuz U and Progress had been lost.

Piecing together the last milliseconds of telemetry data received from the vehicle and reviewing manufacturing records, investigators pieced together what had sealed the fate of the mission. According to the commission’s findings, the mission was lost due to an engine-related failure on the Block I third stage – either due to ingestion of foreign particles or a defect within the engine’s high-pressure oxidizer pump introduced during production.

News later emerged that the manufacturer of the RD-0110, the Voronezh Mechanical Plant, was also facing a recall of engines built for the Proton rocket after persistent problems during hot fire tests. These failures were reportedly linked to a switch from a heat-resistant metal alloy to a cheaper, less refractory metal used in the engine’s production. This switch had not been submitted to quality control authorities prior to implementation.

While Proton is facing an extended grounding to re-work the engines, Soyuz schedules have less margin given the vehicle’s role in keeping the Space Station staffed and stocked up on supplies. A decision was made to ship the Block I third stage for the Soyuz U / MS-05 mission from Baikonur back to its manufacturer, TsSKB Progress, where it would be re-fitted with a new RD-0110 engine from a different lot than the accident vehicle.

The launch of Progress MS-05 was pushed three weeks to facilitate the engine replacement and Block I was shipped back to Baikonur around February 11 to prepare for integration with the Soyuz U rocket. By that time, final processing on the Progress spacecraft had been well underway with the vehicle in the process of being fueled for flight, receiving propellants for its own engines, refueling propellants for the Space Station and pressurized gases and water for transfer to ISS.

The spacecraft returned to the Site 254 processing facility on February 14 for final cargo loading and the installation of the launch adapter two days later. On Friday, Progress was rotated to a horizontal position and the final protective covers were removed before the spacecraft was encapsulated in the protective launch shroud, setting the stage for its transfer to the launcher integration facility on Saturday.

Assembly of the Soyuz U rocket was completed on Sunday with the installation of the Progress spacecraft atop the refurbished Block I upper stage and the mating of the Block I to the Block A core stage which already had its four boosters installed. The 46-meter tall rocket emerged from its assembly hall before sunrise on Monday, starting a slow trek to Site 1/5 at the traditional early morning time dating back to Yuri Gagarin’s mission.

After arriving at the historic launch complex that has supported over 500 R7-class rocket launches, Soyuz was raised to its vertical launch position to enter the typical two-day pre-launch flow that includes final testing activities and preparations for the rocket’s eight-hour long countdown.

As countdown clocks start ticking, engineers will prepare the rocket for propellant loading operations and complete final physical reconfigurations such as the installation of batteries and the removal of protective engine covers. Picking up four hours before launch, Soyuz will receive 274 metric tons of Kerosene and Liquid Oxygen propellants pumped into a total of 12 tanks on the vehicle. The core and boosters are also loaded with Nitrogen to act as pressurization gas and engineers manually load highly reactive Hydrogen Peroxide that drives the engine turbopumps on the lower stages.

Standing fully fueled, Soyuz U will be revealed for its final liftoff at around T-45 minutes when the Service Structure halves will retract from the rocket, clearing the way for the automated countdown sequence, kicking in at T-6 minutes with the insertion of the launch key to initiate a number of steps to transition the 313-metric ton rocket to an autonomous launch configuration.

The Launch Command at T-20 seconds will set in motion the ignition sequence on the boosters and core stage as turbopumps are spun up to flight speed and igniters are fired to enable the RD-117 booster engines and the RD-118 on the core stage to roar to a collective liftoff thrust of over 400 metric ton force – overcoming counterweights to lift the rocket off the ground at precisely 5:58:33 UTC.

Setting sail for one last haul into orbit, Soyuz U will ascend vertically before pitching over to head north-east, aiming to deliver the 7,300-Kilogram Progress into the orbital plane of the Space Station.

The four boosters will be in action for one minute and 58 seconds, doing most of the work to accelerate the Soyuz to a speed of 1.5 Kilometers per second. After exhausting a propellant supply of 39,600kg, the four boosters will swing outward and drop away from the still-firing core stage.

Pushing toward the edge of space with a thrust of 102 metric-ton-force, Soyuz will jettison the protective payload shroud just after passing the T+2.5-minute mark when it will have reached an altitude of 85 Kilometers where aerodynamic forces can no longer harm the Progress spacecraft. The core stage will have done its job 4 minutes and 45 seconds into the mission, marking the start of the hot-staging sequence to hand powered flight duties off to the Block I.

RD-0110 will fire up two seconds later and the structural connection to the core will be separated to enable Block I to head towards orbit while the spent core enters a ballistic trajectory toward a crash landing 1,500km from Baikonur. Delivering 30,400 Kilogram-force of thrust, Block I will be tasked with a burn of three minutes and 58 seconds to inject the Progress into the standard orbit of 193 by 245 Kilometers, inclined 51.66 degrees.

Separation of the Progress is expected eight minutes and 49 seconds after launch and will be followed by a series of time-tagged commands executed by the spacecraft to deploy its solar arrays and communication antennas, pressurize the propellant tanks, and initiate communications with the ground for orbit determination.

The mission, like all MS-class vehicle flights to date, will stick to the 2-day, 34-orbit rendezvous profile calling for Progress firing its engine on the third lap around the planet to raise its orbit to over 300 Kilometers in altitude and catch up with ISS from behind and below. A small orbital correction on Orbit #18 will position the craft for the initiation of its fully Automated Rendezvous Sequence on Friday to set up for docking to the Pirs module at 8:34 UTC. Progress MS-05 is set for a short-stay of four months depending on how the future Soyuz manifest shapes up.