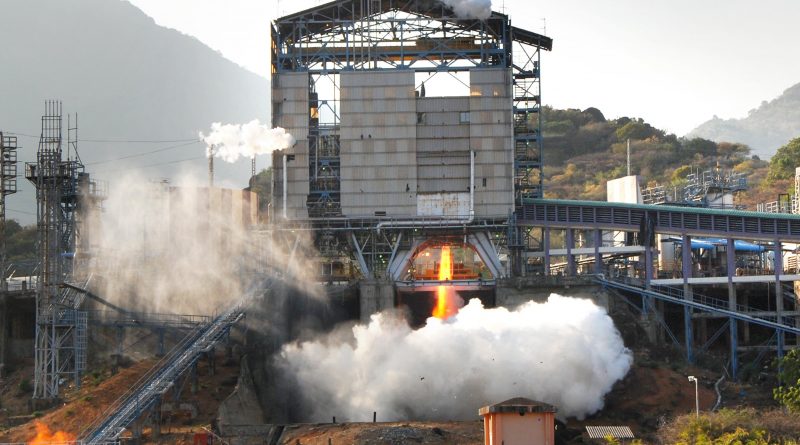 The Indian Space Research Organization completed a major test of its most powerful cryogenic rocket stage on Friday on a path to the first orbital test launch of the GSLV Mk. III launch vehicle in the coming months to further expand India’s fleet of operational launch vehicles.

Friday’s test, carried out at the Mahendragiri Propulsion Complex, involved a full-duration firing of the C25 cryogenic rocket stage that will fill the role of upper stage on the Geosynchronous Satellite Launch Vehicle Mk. III, also known as LVM3. Development of C25 and its 200 Kilonewton CE-20 engine, India’s most powerful full-cryogenic engine, has proven out as the bottleneck in getting LVM3 to the launch pad.

The 43.5-meter tall LVM3 comprises a pair of Solid Rocket Boosters that power the vehicle off the ground before the four-meter core stage fires up towards the end of the booster burn, employing a pair of Vikas 2 engines. Both the boosters and the hypergolic core stage benefited from past developments made for the Polar Satellite Launch Vehicle and the GSLV Mk. II while the cryogenic stage, the powerful engine in particular, was a completely new design.


Development of cryogenic rocket technology was initiated by ISRO back in the 1990s to realize a powerful upper stage for the Geosynchronous Satellite Launch Vehicle. Initial flights of the GSLV Mk. I variant employed cryogenic rocket stages procured from Russian in a deal inked in the early 90s for seven flight units and one ground test model.

India’s first indigenous Cryogenic Upper Stage, known as CUS-12, first flew on the maiden flight of GSLV Mk. II in 2010, but suffered a malfunction in the fuel boost pump of the CE-7.5 engine. GSLV had another failure in 2010 and was sent back to the drawing board for a top-to-bottom redesign with particular focus on the CUS design. The CE-7.5 propellant feed system was redesigned and the engine underwent 35 ground tests before GSLV returned to the launch pad in 2014 and achieved the first successful flight with India’s own upper stage.

The goal for GSLV Mk. III was to apply lessons learned from the CUS and its CE-7.5 engine and upscale the design to create a larger upper stage and a more powerful engine with a target thrust of 200 Kilonewtons.

An initial sub-orbital flight test of the LVM3 rocket was performed in December 2014 featuring a mass simulator in place of the C25 upper stage to collect data on how the rocket would perform during operation of its twin boosters and large liquid-fueled first stage. The mission carried the Crew Module Atmospheric Re-entry Experiment (CARE) – a scaled version of India’s future crew capsule that completed a re-entry demonstration and splashed down under parachutes in the Bay of Bengal for recovery and post-flight analysis.

While the lower stages of the LVM3 rocket went through a successful demo flight, C25 was still in the midst of its development process. A pair of engines were used for qualification testing at sea level conditions picking up with a full-duration burn in April 2015 and an endurance test in July for a burn time of 800 seconds followed by another full burn February 2016. A third production CE-20 went through an acceptance test in high-altitude conditions in December 2016, intended to be flown on the first C25 stage.

The first integrated test of a C25 rocket stage was performed on January 25 for a 50-second validation test followed by the 640-second full-duration test carried out on Friday that marked the final planned pre-flight test of the C25 upper stage. “The performance of the Stage during the hot test was as predicted,” ISRO said in a statement. “Successful hot test for flight duration qualifies the design of the stage and the robustness of the facilities conceived and established towards its development.”

Testing of C25 was realized in just four months and, in addition to hot fire tests, included a validation of processing and service procedures needed in the preparation of the stage for flight.

The C25 stage stands 13.3 meters tall and matches the core stage’s four-meter diameter. It holds 27,800 Kilograms of Liquid Oxygen and Liquid Hydrogen for consumption by CE-20, an open cycle gas generator engine that can run at a fixed thrust level between 180 and 220 Kilonewonts, typically operating around 186kN.

LVM3 acts as a launcher for satellites into Geostationary Transfer Orbit and India’s future crew vehicle. It is capable of lifting four metric tons into a standard Geostationary Transfer Orbit and eight metric tons into a 600-Kilometer Low Earth Orbit. A future iteration of the LVM3 design will replace the L110 core stage with a LOX/RP-1 stage powered by India’s SCE-200 Semi-Cryogenic Engine with a thrust near 2,000 Kilonewtons, enabling a GTO performance of up to ten metric tons.

According to ISRO, preparations are on track for an April 2017 launch of LVM3 on its first orbital mission from the Satish Dhawan Space Center, carrying the 3,200 Kilogram GSAT-19E satellite into orbit.