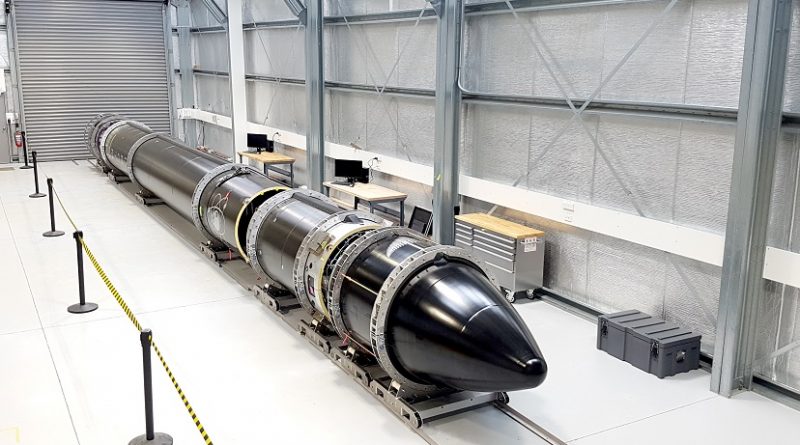 Rocket Lab’s innovative Electron rocket has entered a final stage in the preparation for the company’s maiden launch, arriving at its New Zealand launch site for several weeks of processing and testing. No firm timeline has been set for the mission, but Rocket Lab plans to fly three qualification missions in relatively close succession to be able to enter operational services before the end of the year.

The components of the first flight vehicle arrived at Launch Complex 1 on New Zealand’s Mahia Peninsula last Thursday to undergo assembly before rollout to the sea-side launch facility for final verification testing, putting the rocket and the brand new ground systems through their paces before flight.

“It’s an important milestone for our team and for the space industry. In the past, it’s been countries that go to space, not companies,” said Peter Beck, Rocket Lab’s CEO. “Through the innovative use of new technologies our team has created a launch vehicle designed for manufacture at scale. Our ultimate goal is to change our ability to access space.”


Electron is the world’s first “battery-powered rocket” to make it to the launch pad, employing an electric pump-fed combustion cycle that uses electric turbopumps instead of complex high-pressure turbomachinery driven by combustion gas in open or closed cycle engines. With Electron, Rocket Lab sets out to develop a cost-effective commercial launch service catered to the niche of small satellites that would normally have to purchase secondary payload slots, making them dependent on the schedule and orbital requirements of another project.

Electron’s first mission has been aptly named “It’s a Test” by the Rocket Lab workforce. “We put it out to our team to name the vehicle,” said Beck. “We wanted to acknowledge the intensive research and development Electron has undergone and that continues with these test flights.”

The first flight-ready rocket was trucked from Rocket Labs manufacturing base near Auckland to Mahia, located on the east coast of New Zealand’s North Island from where Electron will be able to reach a wide variety of orbital inclinations.

Over the coming weeks, teams will assemble the booster in a horizontal integration facility before moving Electron to its launch pad.

The company has not provided a schedule for their inaugural launch campaign and Electron will be flying without any satellite payloads. “It’s a Test” will host an instrumentation package to capture a number of performance parameters beyond the typical launch vehicle telemetry to gain insight into how the rocket’s various systems and structures behave in different flight environments.

Test flights two and three, expected to come within a few weeks of each other, will carry CubeSats into orbit under contact with ISIS – Innovative Solutions in Space and satellite Internet start-up Outernet Inc. Rocket Lab is contracted for at least seven operational missions, including a Venture-Class launch contract from NASA, three dedicated launches for San Francisco-based Planet, and three flights for Moon Express. Beyond that, the company is offering quarterly Rideshare launches to a 500km SSO starting in Q2 of this year.

Electron offers small satellite operators flexibility in setting their own schedule and catering to their orbital requirements with a launch price of under $5 million for dedicated missions and around $6.5 million when launching CubeSat cluster missions. The two-stage rocket can lift up to 225 Kilograms into Low Earth Orbit and 150kg into a 500-Kilometer Sun Synchronous Orbit that is of relevance for Earth-Imaging companies.

Rocket Lab developed all components of the Electron rocket in-house, coming up with an all-composite design that makes use of advanced carbon composite materials to build a strong and very light-weight structure. Overall, the rocket stands 17 meters tall and measures 1.2 meters in diameter with a launch mass of around 12.5 metric tons. Its first stage is powered by nine Rutherford engines, generating a launch thrust of 15 metric-ton-force that rises to 18,700 Kilogram-force when flying through the rarefied upper atmosphere.

Rutherford is the first electric-pump fed engine to reach the launch pad, also the first Kerosene/Liquid Oxygen engine to use 3D printing for all primary components. Two brushless DC motors, each the size of a soda can, drive the engine’s turbomachinery, spinning at up to 40,000RPM. Thirteen batteries installed on the rocket’s first stage deliver over 1 Megawatt of power during just over two and a half minutes of first stage operation, relying on advanced Li-Polymer battery technology.

A 22-Kilonewton, vacuum-optimized version of the Rutherford engine powers Electron’s second stage into orbit, using three battery packs to power its pumps, two of which are jettisoned in flight. Sitting atop the second stage can either be a single payload or any combination of CubeSats amounting to 82 CubeSat Units. Rocket Lab developed a ‘Plug-In Payload’ Integration system that allows satellite operators to integrate their own payload stack and ship it to the launch site for a single assembly step with the rocket, taking only a matter of hours.

Upon completion of the company’s flight qualification program, Rocket Lab hopes to begin stepping up their launch rate to one mission per week. Their Mahia site is licensed for one launch per three-day period and Rocket Lab is also looking into launching from Cape Canaveral and the Pacific Spaceport Complex in Alaska.