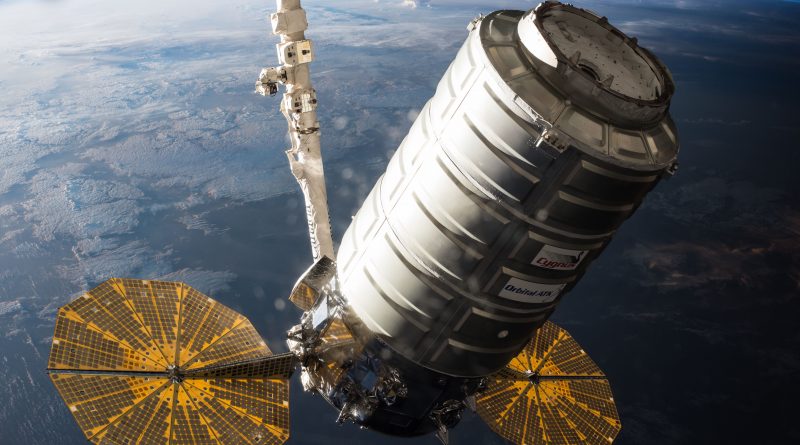 Orbital ATK’s Cygnus OA-6 spacecraft is being buttoned up for its departure of the International Space Station on Tuesday for an eight-day free flight dedicated to NASA’s Saffire-I In-Space Fire Experiment as well as the release of CubeSats from an external deployer.

The S.S. Rick Husband lifted off from Cape Canaveral on March 23 atop a United Launch Alliance Atlas V rocket as the second of two Cygnus missions using the Atlas V to bridge a gap until the re-engined Antares 200 series begins flying. During its climb into orbit, Atlas V encountered a very close call when its first stage shut down five seconds early, requiring the Centaur upper stage to extend its burn by over a minute, consuming almost its entire propellant margin.

Despite the premature shutdown of the first stage, Atlas V managed to deliver Cygnus to its planned orbit for a two-day chase of ISS. Loaded with 3,395 Kilograms of cargo, Cygnus made a smooth rendezvous with the Station, being grappled by Canadarm2 under the control of Astronaut Tim Kopra. Berthing of the spacecraft to the Node 1 module took place the same day and the hatch was opened one day later.


The crew aboard ISS was busy for almost two months, unloading cargo delivered by Cygnus and placing trash and no-longer-needed items into the cargo carrier, performing cargo operations as time permitted during their busy schedule of experiments and ISS maintenance activities.

Delivered by Cygnus OA-6 were dozens of experiments covering different branches of science. The Meteor Camera that had been onboard the failed Orb-3 and SpX-7 missions finally made it to ISS to begin recording the spectral signatures of meteors entering Earth’s atmosphere. Strata-1 delivered to ISS four tubes of regolith material to study the behavior of comet or asteroid soil in a microgravity environment, relevant for the development of landing technology for missions to bodies with very little gravity.

As the OA-6 mission was slowly winding down, the ISS crew put in several disposal cargo loading shifts last week. Per the typical plan, the USOS crew members will spend Monday buttoning up the spacecraft and closing its hatch before outfitting the hatchway by removing data and power jumpers and installing Control Panel Assemblies and the Central Disk Cover. Once Unity’s hatch is closed, the vestibule between the spacecraft is depressurized for leak checks.

On Tuesday, teams will pick up operations to unberth the Cygnus spacecraft by releasing a series of 16 Common Berthing Mechanism Bolts that held Cygnus firmly in place for its two and a half month stay. With the bolts released, four capture latches will be opened to give Canadarm2 full control of the spacecraft. ROBO controllers on the ground will then take the arm through a series of motions to place Cygnus in a position for release.

Release of the Cygnus spacecraft is expected at 13:30 UTC as capture latches and snares in Canadarm’s Latching End Effector are opened. Canadarm2 will retreat to a standoff distance of 1.5 meters and Cygnus will receive an abort command to initiate a two-minute departure maneuver taking Cygnus to a prograde trajectory, pulling out in front of the Space Station.

The Saffire-I combustion experiment will be conducted five hours after Cygnus departs ISS. This is the first ever experiment to ignite a large-scale fire in space to study a realistic fire on a space vehicle, looking at flame growth, temperatures and oxygen use to assess how microgravity and limited oxygen affect the properties of a fire. Data from SAFFIRE will be used to improve fire safety on future crewed spacecraft and help NASA in choosing materials for future vehicles.

On June 15, an external CubeSat Deployer will release five Lemur-2 satellites operated by Spire Global, to establish a constellation of small, inexpensive satellites in operation for a number of purposes such as Earth observation, maritime monitoring, communications, meteorology and science. The Lemur-2 satellites carry two different payloads, SENSE, featuring an Automatic Identification System receiver to collect ship ID, position and speed data, and the STRATOS payload, making use of GPS occultation measurements to deliver temperature, pressure and humidity profiles of Earth’s atmosphere for application in operational meteorology.