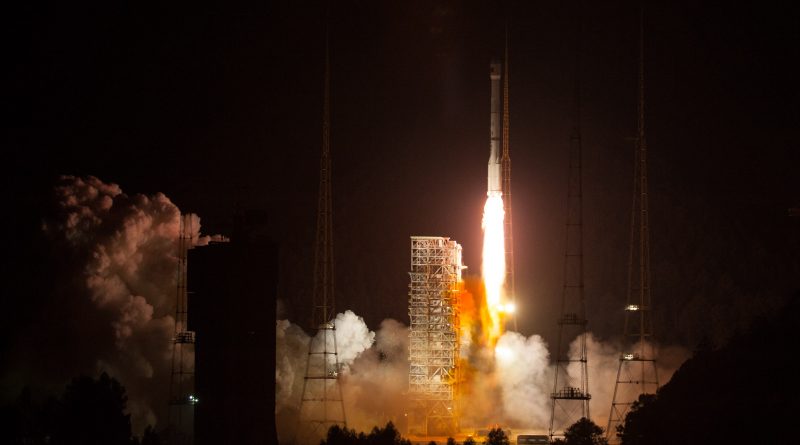 A Long March 3C rocket blasted off from the Xichang Satellite Launch Center on Sunday in support of China’s existing Navigation Satellite Program, replenishing the Beidou-2 constellation to continue services until the follow-on system comes on line before the end of the decade.

Topped with the Beidou-2 G7 satellite, CZ-3C leapt off its launch pad around 15:30 UTC and thundered into the night skies. The 56-meter tall rocket swung to the south-east to overfly the Chinese mainland, dropping its two-liquid fueled boosters, the first stage and the payload fairing onto the Guizhou and Jianxi provinces.

CZ-3C then flew out over the Pacific Ocean to fire its third stage twice, aiming for a highly elliptical Geostationary Transfer Orbit from where the satellite can be lifted into Geostationary Orbit to join the Beidou-2 satellite constellation. Launch success was confirmed a little over one hour after liftoff.

China is currently in the midst of deploying the country’s third generation of Beidou Satellites to achieve Phase III in their Global Navigation Satellite Program. However, the launch of Phase II satellites is a necessity for keeping the existing system in an operational sate until Beidou-3 can take over when the constellation reaches a certain number of satellites.

China’s Navigation Satellite System was first envisioned in 1983 and saw its first launch in 2000 when the first generation of Experimental Satellites started deployment to operate from Geostationary Orbit. Comprised of three active satellites, the system offered navigation services limited to the Chinese territory. To expand services across the Asia-Pacific Region, the second phase of the project was initiated. Inaugurated in 2009, Beidou-2 consists of five satellites in Geostationary Orbit, five in inclined Geosynchronous Orbit and four (plus a test satellite) in Medium Earth Orbit. This system covers the entire Chinese territory and a vast stretch of the Asia-Pacific Region.

The final step in this stepwise outline is establishing a space-based navigation system for services across the globe at all times of day. Beidou-3, setting out to achieve that goal, began deployment in 2015 with three launches – lifting two satellites into Geosynchronous Orbit and another pair into Medium Earth Orbit.

Three Beidou launches were planned for 2016 – two dedicated to the heritage system and a single launch in support of the new Beidou-3 system. A Long March 3C delivered the Beidou-3-M3S satellite to a Medium Earth Orbit on February 1 and the Beidou-2-IGSO6 satellite was lifted into an inclined Geosynchronous Orbit on March 29.

Sunday’s launch of Beidou-2-G7 concludes the planned Beidou launches for this year with focus shifting to a number of Chinese science missions as well as manned spaceflight operations.

When finished, Beidou-3 will consist of 27 birds in Medium Earth Orbit, five heavier satellites in Geostationary Orbit and three in inclined Geosynchronous Orbits to expand services to global coverage while also providing compatibility with heritage Beidou-1 and 2 systems. Beidou-3 will reach its full operational capability by 2020.

The Beidou-2G satellites are based on the DFH-3 satellite bus provided by the China Academy of Space Technology (CAST). The DFH-3 bus is hexahedral in shape measuring 2.2 by 1.7 by 2.0 meters in size. Weighing in at over two metric tons, the satellite hosts payloads up to 200 Kilograms hosting a phased array antenna for the transmission of navigation signals, an S- and L-Band dish antenna, a C-Band ranging antenna and a laser retroreflector for precise orbit determination.

Beidou delivers two types of service – a free service that is open for everyone with a compatible terminal and a licensed service for the Chinese government for application in military and other purposes. The free service will provide a position accuracy of 10 meters, speed measurement as accurate as 0.2m/s and a timing accuracy of 10 nanoseconds. The restricted service will have a tracking accuracy of 10 centimeters and will include data transmitted via the signal to deliver information on the status of the system to operational users.

Furthermore, Beidou-2 provides compatibility with existing Beidou-1 Terminals, involving a ground-based algorithm that transforms 2D position information from a pair of GEO satellites to a 3D read-out by employing a topographic algorithm.

Lifting off from Xichang, the 56.3-meter tall Long March 3C Rocket, weighing 368 metric tons, began heading south-east after a short vertical ascent. Under the power of its core stage and two liquid-fueled boosters, the vehicle began racing downrange for a trip over China before heading out over the Pacific Ocean, starting with a total thrust of 458 metric-ton-force.

The twin boosters, each 16.09 meters long and 2.25 meters in diameter holding 41,100 Kilograms of storable propellants, were to burn for two minutes and 20 seconds to deliver 740 Kilonewtons of thrust for the initial flight portion. The vehicle was to continue powered flight on the four-chamber DaFY-6-2 engine of the core stage delivering 2,961 Kilonewtons of thrust. Over a burn of 158 seconds, the 24.76-meter long first stage was to burn through 186,200 Kilograms of hypergolic propellants.

Assuming control of powered flight, the cryogenic third stage, consuming LOX and LH2 propellants, was expected to ignite the YF-75 dual-engine cluster to deliver 16,000 Kilogram-force of thrust to boost the stack into a Low Earth Parking Orbit.

Generating 157 Kilonewtons of thrust, the third stage was to ignite again and burn through a total of 18,200 Kilograms of cryogenic propellants, raising the apogee of the orbit and achieve a Geostationary Transfer Orbit for spacecraft separation just over 26 minutes into the flight.