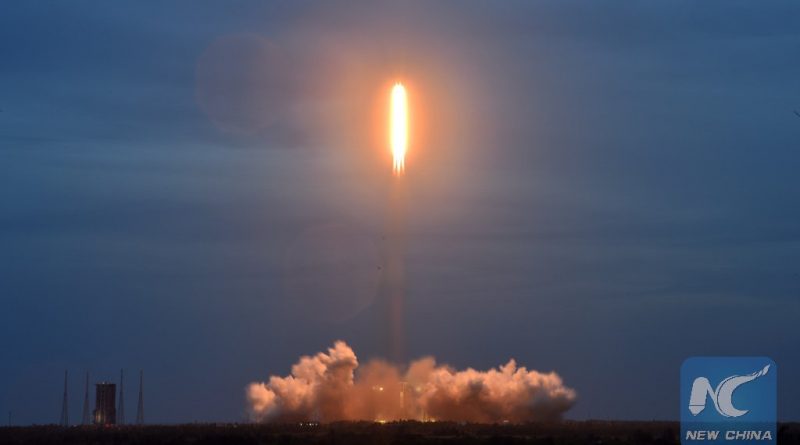 China’s most powerful rocket suffered a major setback on Sunday when it failed to send the Shijian-18 experimental communications satellite into orbit to test drive a new ultra-high-performance satellite platform.

China’s official Xinhua news agency confirmed the mission ended in failure and said an investigation was being convened, though details on the circumstances of the mishap are not yet clear.

Conducting its second launch, Long March 5 lifted off from a picturesque tropical launch site on Hainan Island at sunset on Sunday, rising into sunlight shortly after blastoff before disappearing in the night on its second orbital mission.


The 57-meter tall Long March 5 lifted off from Launch Complex 101 at the Wenchang Satellite Launch Center at 11:23 UTC, 7:23 p.m. local time – rising under the power of twin cryogenic engines and four Kerosene-fueled rocket boosters to begin a half-hour climb into a high-energy orbit.

All appeared to go by the book in the initial ascent phase until trouble struck some time after the rocket shed its four boosters. Separation of the core stage from the also-cryogenic second stage was around 100 seconds later than planned and the second stage’s burn did not match pre-flight prediction as the vehicle appeared to lose altitude.

It is not clear what lies at the root cause of the in-flight anomaly.

Sunday’s mission came after the debut launch of Long March 5 last November that saw the successful delivery of the Shijian-17 satellite directly to Geostationary Orbit in a mission surrounded by much more excitement than engineers had bargained for. Throughout the countdown and as late as T-2 minutes, engineers were scrambling to work around a string of problems from issues related to fueling to telemetry drop outs. The rocket’s inaugural mission was also not free from trouble as the second stage shut down around 11 seconds early, requiring the upper stage to make up for lost performance using generous margin built into the debut mission.


Engineers hoped they had ironed out all teething issues for Sunday’s mission that had the primary goal of validating Long March 5’s reliability to clear the heavy-lifter for high-profile missions starting with the launch of the Chang’e 5 lunar sample return mission in November. China will also rely on the Long March 5 for the launch of the Tianhe Core Module in 2019 as well as the two major science modules of the Chinese Space Station early in the next decade.

Long March 5 represents a cornerstone in China’s space ambitions and will be called upon for a variety of missions ranging from heavy hauls into Low Earth Orbit with Space Station components, launching the country’s heaviest geostationary satellites, to supporting solar system exploration by launching interplanetary probes such as China’s 2020 Mars rover.

Utilizing modern rocket technology like Kerolox and full cryogenic stages, Long March 5 closely matches or even surpasses the performance of current industry workhorses like the European Ariane 5, Russia’s Proton and the Delta IV Heavy, which still holds the rank as the most powerful launcher on the American market until SpaceX can introduce its Falcon Heavy which has about twice the performance of the CZ-5 (when flying expendable).

Long March 5 is the largest member in China’s new line of rockets that was introduced in the last two years to mark a major shift in rocket technology, stepping away from the hypergolic propellants used by the Chinese for more than four decades and introducing Kerolox and cryogenic propulsion systems that offer a much better performance at a fraction of the cost plus are more environmentally friendly.

Following its first flight in 2016, Long March 5 was expected to keep an initial pace of around two flights per year and preparations for the Y2 mission began back in late April when the Long March 5 was delivered via ship from its manufacturing plant in Tianjin. The fully assembled rocket with Shijian-18 under its payload fairing was moved to the LC-101 launch pad on June 26 for several days of checkouts prior to heading into countdown operations.

Long March 5 comprises two cryogenic rocket stages powered by Liquid Oxygen and Liquid Hydrogen, four Kerolox boosters for the initial kick toward orbit and an optional hypergolic-fueled YZ-2 upper stage that was not in use on Sunday and comes into play for Medium-Earth and direct-to-GEO missions. The vehicle weighs 867 metric tons at liftoff and spans 12 meters from side to side.


The Long March 5 rocket entered propellant loading at 8:30 UTC on Saturday, beginning with filling the four boosters with 150 metric tons of Kerosene stored at room temperature. Loading of cryogenic Liquid Oxygen into the boosters and the two stages as well as LH2 load on the core stages picked up on Sunday with no issues reported as the vehicle received some 580 metric tons of cryogenics. The protective Service Platforms opened up an retracted from the vehicle in the last four hours to launch and all tanks entered a stable replenish well ahead of liftoff.

Ignition sequence start was commanded at T-10 seconds and red flames erupted from the base of the rocket at T-6.8 seconds when the twin hydrogen-fueled YF-77 engines on the Core Stage were commanded to ignite followed at T-3 seconds by the eight YF-100 engines on the boosters – catapulting Long March 5 off the pad when clocks reached zero.

Long March 5 took flight at precisely 11:23:23.425 UTC, rising from its launch pad on Hainan Island in a vertical posture before pitching over onto a departure to the east-south-east to head towards the equator. Many spectators at China’s only publicly accessible spaceport watched in awe as Long March 5 thundered into twilit skies with a total thrust of 1,078 metric-ton-force, the boosters doing most of the work in the early flight phase, pushing the vehicle beyond the speed of sound just after hitting the T+1 minute mark.

The boosters fired until T+174 seconds, each generating 240 metric-ton-force of thrust to help accelerate the rocket to a speed of 2.8 Kilometers per second. Each used two YF-100s, an oxygen-rich staged combustion engine that builds the common element in China’s new line of rockets, also featured on the Long March 6 and 7, going back to Russia’s pioneering oxygen-rich closed cycle engine technology that China acquired in the 1990s.

Shutting down their engines after each consumed some 135 metric tons of Kerosene and Liquid Oxygen, the 27-meter long boosters separated from the still-firing core stage via pyrotechnics and separation rockets that propelled the boosters outward and away from the core which continued onward using its two YF-77 engines, generating a vacuum thrust of 143 metric ton force.

Where trouble emerged in Sunday’s flight is not entirely clear, however, a number of abnormalities became apparent from the live coverage provided of the mission.

Payload fairing separation occurred at the expected time, four minutes and 45 seconds into the flight and was met with applause by mission controllers – indicating there was no sign of any serious anomaly at that point in the launch.

Five minutes and 47 seconds into the flight, what until then was a well organized jet from the base of the rocket (likely the gas generator exhaust from the open cycle YF-77 engines) suddenly turned into a white cloud bursting away from the lower section of the core stage, indicating some type of breach in a pressurized system. The event appeared to be associated with a disturbance of the rocket’s attitude as evident by the sunlit horizon that moved rather rapidly. The venting cloud of gas was still present at T+440 seconds, per video from on board the rocket.

The two YF-77 engines of the core stage were expected to fire until 465 seconds into the flight (7 minutes and 45 seconds) to be followed within three seconds by the separation of the stages and the ignition of the two YF-75D expander cycle engines on the second stage. However, stage separation did not occur until 570 seconds into the mission, 105 seconds later than specified.

The second stage fired up at T+575.3 seconds according to telemetry displays at mission control, aiming to place the stack into a Low Earth Parking Orbit. However, as shown by the telemetry displays, the second stage was dropping in altitude – most likely due to insufficient velocity imparted by the first stage. The timing of when the decline in altitude started is a fairly good match with the emergence of the white gas cloud around the core stage.

Second stage shutdown was marked at T+770.3 seconds after a burn of only three minutes and 15 seconds, insufficient to place the stack into an orbit. Another observation at the start of the second stage burn was a large amount of gimbaling on the twin engines, likely to correct a rather significant deviation of the rocket’s orientation that built up toward the end of the first stage’s operation.

At this point, pacing got more nervous at Mission Control and fingers were pointing toward monitors as the realization sunk in that the CZ-5 Y2 mission would not be a successful one.

The original plan called for the second stage to fire for four minutes and 48 seconds to put the stack into a Parking Orbit around 170km in altitude followed by ten minutes of coasting and a 5-minute and 59 second burn to put Shijian-18 into a Supersynchronous Transfer Orbit of 200 x 46,000 Kilometers.

Sunday’s mishap was China’s second unsuccessful orbital launch attempt in a row following the botched launch of the Zhongxing-9A communications satellite that ended up in a lower-than-planned orbit when its Long March 3B upper stage encountered a serious issue. 2017 was expected to be a record-setting year for Chinese space flight with Chang’e 5 at the forefront, a launch that is now in doubt after two iffy missions for the Long March 5.

The Long March 5 Y2 mission carried the Shijian-18 experimental communications satellite – a milestone development for the Chinese, debuting a new ultra-high-performance satellite platform and featuring innovative systems like high-thrust ion propulsion, laser communications and ultra-secure quantum communications. Based on the DFH-5 satellite platform, Shijian-18 was the heaviest non-classified Geostationary Satellite ever launched, weighing in at just over seven metric tons according to press reports.

The DFH-5 platform builds on China’s current-generation DFH-4 but triples its payload capacity, hosting communications packages up to 2,200 Kilograms with a payload power up to a whopping 28 Kilowatts, surpassing the most powerful commercial platforms currently on the market.

Shijian-18 hosted a powerful high-throughput communications payload operating in the Ka-Band frequency range and providing a total data throughput of 70 Gbps, eclipsing China’s first high-throughput satellite that launched earlier this year and has a capacity of 20Gbps.

State-run media also reported Shijian-18 was outfitted with an optical communications payload, taking advantage of the short wavelength of the infrared/visible spectrum to increase the bandwidth over radio communications ten- to one-hundred-fold. The laser terminal installed on Shijian-18 was to reach a downlink data rate of 4.8 Gbit/s, according to the satellite’s chief designer, paving the way for future high-data rate communications for application on Earth and over cosmic distances for solar system exploration.

Continuing China’s efforts in quantum communications and quantum computing, Shijian-18 was reportedly carrying a Quantum Communications Payload – the first to be tested from Geostationary Orbit over a distance of 36,000 Kilometers.

China has become a trailblazer in the field of quantum communications, launching the Mozi Quantum Science Satellite into orbit last year to demonstrate Quantum Key Distribution, the exchange of cryptographic keys between two parties, by means of correlated, or entangled photons – particles of light.