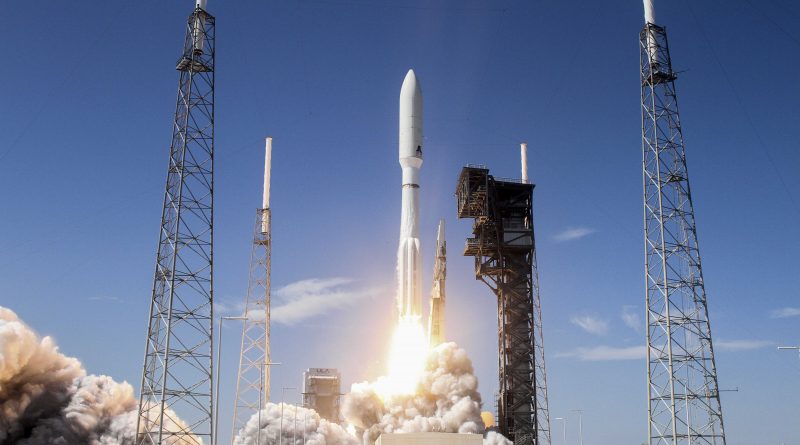 United Launch Alliance won a $191 million launch contract over SpaceX in an open competition for the Space Test Program 3 mission of the U.S. Air Force, targeting launch in 2019 according to documentation released by the Air Force on Thursday.

The U.S. Air Force put the STP-03 mission out for bids in September 2016, specifying a direct delivery of the STPSat-6 satellite and several small satellites into a Drift Orbit above the Geostationary Belt. SpaceX and ULA both submitted proposals with ULA offering an Atlas V 551 rocket, a flight-proven vehicle with known direct-to-GEO capability, while SpaceX had to bid their Falcon Heavy rocket that has not yet flown let alone managed a direct GEO injection. SpaceX therefore was not expecting to win the contract, even if offering a significantly lower bid.

According to budget documentation issued on Thursday, the STP-03 launch contract covers a total of $191,141,581 awarded under a firm-fixed-price contract scheme with $184.9 million coming from fiscal year 2017 space procurement funding. Per contract specifications, the total mass delivered to GEO will be between 3,267 and 4,547 Kilograms, depending on the selection of the secondary payloads.

This was the third U.S. National Security Launch put out for competitive bidding for ULA and SpaceX, though only one so far saw the companies on level playing ground: ULA decided to sit out the first bid for a GPS III satellite for different reasons, the second GPS III contract went to SpaceX for offering a lower launch price while matching ULA capabilities and STP-03 saw SpaceX at a disadvantage due to Falcon 9 having not yet flown directly to GEO and Falcon Heavy still waiting for its debut. The upcoming launch of the X-37B on its fifth orbital mission was awarded to SpaceX without competition.

The STP-03 contract is part of what is known as ‘Phase 1A’ of a U.S. Air Force initiative to reintroduce a competitive procurement for Evolved Expendable Launch Vehicles (EELVs) after ULA was the only provider of medium- and heavy-lift capabilities for the better part of a decade, allowing the Air Force to procure launch vehicles under large block buy contracts.


ULA and SpaceX are expected to compete for a number of national security missions over the coming years as other launch providers do not yet have the capabilities for launching heavy-class missions. It can be expected that ULA and SpaceX will remain the only competitors for  15 competitive launches  under Phase 1A before new vehicles such as Blue Origin’s New Glenn can enter the market to compete for Phase 2 missions starting in 2020.

The STP-03 mission revolves around the STPSat-6 spacecraft as main payload, being built by Orbital ATK under a $78 million contract awarded this February, resurrecting an already-built A500 satellite bus that had been previously procured by another government agency for a mission that was ultimately canceled. The project is overseen by the Air Force Space and Missile Systems Center at Kirtland Air Force Base and targets a launch in June 2019.

Eight secondary payloads are part of the satellite, coming from the Space Test Program, National Nuclear Security Administration, NASA, and other DoD agencies. The NASA payload will be the Laser Communications Relay Demonstration (LCRD) to test out ultra-high-speed communications, possible through the shorter wavelength of the infrared and visible laser spectrum that offers a bandwidth increase between a factor of ten and 100.

STPSat-6 is expected to enter Geostationary Orbit between 80 and 120 degrees West longitude and operate for at least eight years, providing complementary measurements to space-based detonation detectors hosted by the GPS constellation. For its launch, STPSat-6 will be accompanied by up to six small satellites hosted by an integrated propulsive EELV Secondary Payload Adapter (IP-ESPA) which will deliver additional propulsion capability to deliver the satellites to their respective target orbits.


Atlas V 551 is currently the most powerful version of the Atlas V on the market, employing a two-stage stack comprised of the RD-180-powered Common Core Booster and the trusted Centaur upper stage with five Solid Rocket Boosters delivering the necessary kick to send the payloads to their desired high-energy orbit. According to ULA’s public RocketBuilder Website, the starting price for an Atlas V 551 without mission customization is $155 million. The Department of Defence contract specifically includes “launch vehicle production, mission integration, launch operations, spaceflight worthiness and mission unique activities” for the STP-03 mission, adding to the base cost of the Atlas V 551.

The propulsive ESPA, developed by Moog, allows non-propulsion equipped secondary payloads to be delivered into a variety of orbits and then provide stationkeeping and/or maneuvering capability over mission lives up to seven years. Mission designs that could be flown by the propulsive ESPA include a transfer from GTO or GEO to the Sun-Earth Lagrange Point 1; what role the ESPA will play for STP-03 is not yet clear.

“We are honored that the Air Force has entrusted ULA with launching this important test mission,” said ULA CEO Tory Bruno. “ULA offers the most reliable ride to space. With a mission success record of 100 percent and a tremendous heritage of 71 consecutive successful Atlas V launches, we provide the best overall launch service for our customers. ULA is the choice for customers when a critical payload must be delivered to space on-time and safely.”