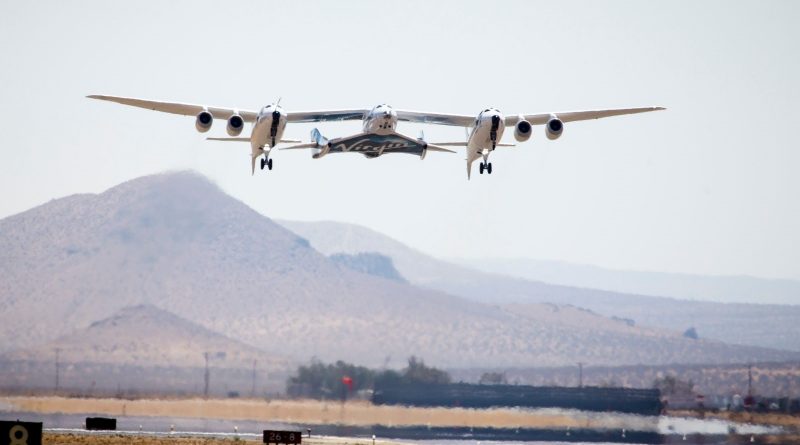 Virgin Galactic’s SpaceShipTwo ‘VSS Unity’ took flight for the first time this week in a captive carry test on the company’s path to powered test flights and ultimately tourist flights to the edge of space aboard the rocket-powered space plane.

Building on the achievement of SpaceShipOne that became the world’s first private spacecraft to reach space, SpaceShipTwo has the goal of advancing space flight systems to make sub-orbital travel available for tourists.

Virgin Galactic, the commercial operator of the craft, has already lined up hundreds of customers that are ready to pay up to $250,000 for a flight to the edge of space to witness the sight of the curvature of Earth and its thin atmosphere in a flight lasting about two and a half fours from takeoff to landing – of which only a few minutes would be spent in microgravity.


Built by The Spaceship Company and operated by Virgin Galactic, VSS Unity is the second SpaceShipTwo-class vehicle to be constructed. The first SpaceShipTwo craft was destroyed in late October 2014 during a powered test flight. One of the pilots was killed in the accident; the other was injured but able to parachute to safety, putting Virgin Galactic on a long path to recover from the accident to achieve its goal of flying customers to the edge of space aboard the futuristic rocket plane.

When the VSS Enterprise crashed, work on the Unity had already been underway for two years with the overall assembly 65% complete. The winged spacecraft was unveiled on February 19 in a rollout event during which the official name of the vehicle was announced. An Integrated Vehicle Ground Testing commenced in February to clear the vehicle for flight.

The Test Flight Program for VSS Unity will start out similarly to testing completed by VSS Enterprise before venturing beyond what Enterprise experienced to be eventually able to transition SpaceShipTwo into operational service. Because VSS Enterprise provided verification of the design’s responses under numerous conditions over its 54 flights, the number of test flights for VSS Unity will be lower.

On Thursday, VSS Unity – suspended under the wing of its carrier aircraft WhiteKnightTwo – took off from Spaceport America for a multi-hour test flight. Two Pilots were aboard SpaceShipTwo to put it through its paces while WhiteKnightTwo was flown by a pair of pilots and a flight engineer.

The test reached a maximum altitude of 15 Kilometers and had a duration of three hours and 43 minutes, collecting a wealth of aerodynamic data in the actual flight environment SpaceShipTwo will experience during its missions.

The flight put all aerosurfaces on the VSS Unity through testing at different altitudes to verify their range of motion and forces on the vehicle. The flight also provided verification that SpaceShipTwo can land when mated to its carrier which would be required in case of an in-flight abort. Data from the test will be analyzed over a period of time ahead of the next captive carry test as any issues are to be ironed out before SpaceShipTwo flies on its own for the first time.

Virgin Galactic stated that a slow, measured approach will be taken to the test flight program and no firm timetable exists for SpaceShipTwo’s entry into commercial service.

Prior to the October 2014 accident, the plan called for up to 100 test flights to be performed ahead of first commercial flights in 2015.

An investigation into the accident conducted by the National Transportation Safety Board (NTSB) found that the structural break-up of the winged spaceplane was caused by a premature unlocking of the craft’s feather mechanism during the dynamic transsonic flight regime, causing the feathers to extend leading to a rapid disintegration of the craft.

The investigation of the NTSB focused on the apparent error by the co-pilot who unlocked the feathers around 14 seconds earlier than specified, during a flight environment in which an aerodynamic deployment of the feathers when unlocked was a known hazard. Investigators also identified deficiencies in the design of the feather system as it allowed a single human error to result in a catastrophic hazard to the SpaceShipTwo vehicle.

In response to the NTSB findings, Virgin Galactic implemented changes to flight documentation to explicitly state the dangers of unlocking the feathers early. In addition, VSS Unity and all subsequent SS2 vehicles come with an automatic mechanical inhibit to prevent unlocking of the feathers during the safety-critical phases of flight.

Eventually, Virgin Galactic hopes to operate a small fleet of SpaceShipTwo vehicles taking humans to the edge of space to enjoy the sight of Earth’s with its thin atmosphere while experiencing the sensation of zero-gravity. Each mission would carry two pilots plus six passengers.