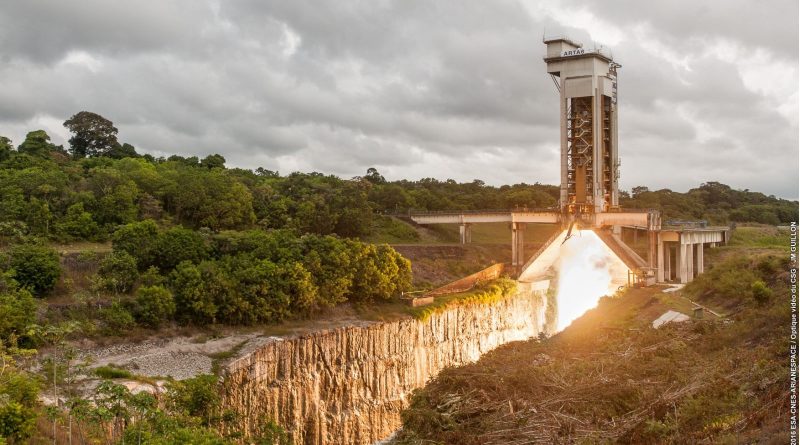 An Ariane 5 Solid Rocket Booster fired up this week at the Guiana Space Center in French Guiana to verify the quality of Ariane SRB production and test new components to the implemented on the booster for Ariane 5 as well as Europe’s small Vega rocket.

The test, carried out on Thursday, was performed under the Ariane 5 Research and Technology Accompaniment (ARTA) program and involved a highly instrumented, full-sized Ariane 5 Solid Rocket Booster also called EAP. Ariane 5 relies on two EAPs for the first two minutes and 15 seconds of its flight, typically helping accelerate the launcher to a speed of two Kilometers per second.

The EAP boosters are tested on the ground to make sure the ones flying are up to the quality standards required by the Ariane 5 program. Also, the tests are used to prove new systems on the boosters as Ariane 5 continues to evolve with the goal of squeezing out the maximum possible performance due to always-growing payload masses.


The EAP stands 31.6 meters tall, is 3.05 meters in diameter using a steel case to contain 240 metric tons of solid propellant. Each booster delivers a mean thrust around 700 metric ton force at a 274.5-second specific impulse.

Thursday’s test was carried out at the booster engine stand, specifically designed for vertical testing of the powerful rocket motors (BEAP – Banc d’Essais des Accélérateurs à Poudre). The EAP was outfitted with a range of sensors and high-speed and thermal cameras were pointed at various elements of the booster, but the most important aspect of the test is post-firing analysis of the booster not possible during most operational missions as boosters are destroyed when impacting in the Atlantic Ocean.

In the past, some Ariane 5 boosters used parachutes and were recovered from the Ocean for post-flight inspections, but they are never re-used.

This week’s test, in addition to overall quality assurance, was also dedicated to testing a new thermal material on the neck of the EAP’s nozzle that is considered more effective than the previous design. It will also find use on the P80 first stage of the Vega rocket.

The test also looked at how a different aluminum material in the propellant would affect the booster’s performance in flight. Also, changes to the booster segment joint seals and a new coating premiered on the ARTA6 booster to be introduced on future production models.

The 135-second firing, initially targeted for September 7, had to be pushed to Thursday due to software problems and concerns related to the weather later in the day’s test window.

After the firing, the team headed into an exhaustive review of test data. Preliminary results based on telemetry gathered during the test and the initial look at the hardware are available after around ten days, but the in-depth analysis of the booster’s performance will take about half a year.

It was the sixth ARTA test during Ariane’s operational career and possibly the last as testing will soon shift to the P120 Solid Rocket Booster that will be employed by the Ariane 6 rocket as well as the next evolutionary stage of the Vega rocket referred to as Vega C.

The Guiana Space Center is a busy place with four launch campaigns in full swing. Coming up on September 16 (UTC) is the launch of the Vega rocket carrying the PeruSat Earth Observation satellite and four operational SkySat imaging craft. Ariane 5 will conduct its next mission on October 4, lifting the SkyMuster II satellite for Australia and GSAT-18 for the Indian Space Research Organization.