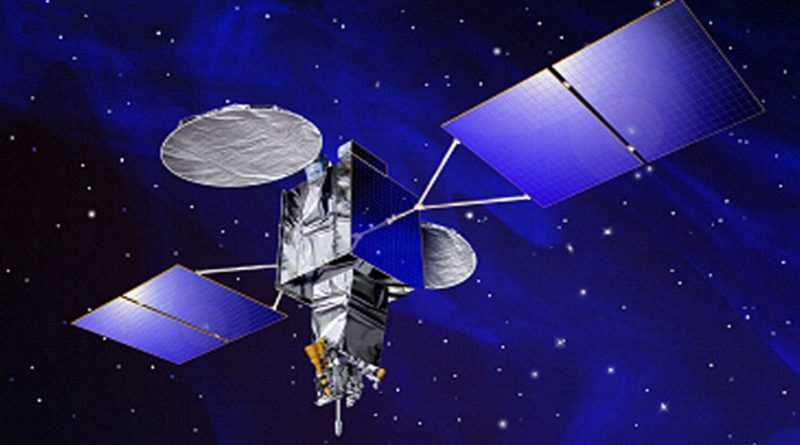 Top-secret documents obtained by the online publication ‘The Intercept‘ from NSA Whistleblower Edward Snowden have lifted the veil on one of America’s most enigmatic satellite missions of recent years, roaming high above Earth to intercept the communications of commercial satellites otherwise not accessible in the NSA’s information-gathering efforts.

Only known by the name of PAN, the satellite was sent into orbit on September 8, 2009 atop an Atlas V rocket under contract with an undisclosed U.S. Government Agency. No agency claimed ownership of the satellite – a highly unusual move as even the National Reconnaissance Office, operator of U.S. spy satellites, publicly acknowledges the launches of its intelligence-gathering birds.


Although no government agency would step forward, spacecraft builder Lockheed Martin was happy to announce the company had built the spacecraft based on the A2100 commercial satellite platform and even released a photo of it in its factory. Normally, photos of U.S. spy assets are kept under wraps until declassification decades after the fact, adding more mystery to PAN’s case.

According to Lockheed Martin, PAN was ordered by its hush-hush operator in 2006 and construction and testing on the satellite finished within three years, suggesting some urgency in getting the satellite into orbit.

The mission’s elusive three-letter designation apparently stood for ‘Palladium at Night.’ In addition to being the name of a rare silver-white metal, Palladium can also stand for a safeguard, “especially one viewed as a guarantee of the integrity of social institutions.” After its successful arrival in orbit, PAN changed its enigmatic name for the numeric designation USA-207 in America’s fleet of classified satellites.

Whenever a classified U.S. intelligence satellite sets sail for its top secret destination in space, a worldwide network of satellite trackers mobilizes to scan the sky for the newly launched bird, also employing radio equipment to help characterize its activity to reveal clues on the craft’s tasks.

In case of PAN, radio observations performed while the satellite was still riding atop its Atlas V booster revealed it was transmitting on a beacon frequency previously employed by Ultra High Frequency Follow-On satellites providing secure communications to mobile military users. However, the lone image of the satellite released by Lockheed showed it was not carrying any large helix antennas required for UHF communications, adding to the mystery of PAN’s actual identity.

Eventually, satellite spotters found USA-207 in a position over Africa, having entered its high-altitude perch in Geostationary Orbit where the craft’s speed matches that of Earth’s rotation so it can remain in the same position relative to the ground.

Geostationary Satellites, especially those kept secret by their respective operating agencies, hide in plain sight. Unless using stealth technology, the satellites – appearing as a dim, stationary dot in the sky – will ultimately be spotted and tracked by hobbyists.

The story for PAN was no different as trackers were able to monitor the satellite’s mysterious moves beginning a few weeks after it launched. PAN’s secret endeavors took the satellite to a range of orbital positions anywhere between 33 degrees East to 53°E – often visiting the direct vicinity of other satellites in the Geostationary Belt as evident in photos captured by satellite trackers.

Roaming 36,000 Kilometers over strategically-interesting targets to U.S. Intelligence Agencies, PAN’s mystery continued to build over recent years as its activity began to suggest that it was not simply a classified communications satellite as claimed by the government.

Last week, ‘The Intercept’ posted a comprehensive story on the Menwith Hill Station (MHS) – a Royal Air Force Station in the British countryside facilitating communications and intelligence services of the United Kingdom and the United States. Going through great lengths to explore the UK’s knowledge of U.S. Targeted Killing carried out from the base, the Intercept article was accompanied by several classified documents from the Snowden leak.

One of the documents, titled ‘Two New Collection Assets to Greatly Expand MHS Target Coverage,‘ deals with a pair of satellites launched in 2009 and operated from Menwith Hill to support the collection of vast space-based intelligence.

According to the document, PAN is tasked with “Foreign Satellite (FORNSAT) collection from space – targeting commercial satellite uplinks not normally accessible via conventional means.”

FORNSAT is a branch of Signals Intelligence Collection aiming to intercept signals of foreign communications satellites, a task that can be accomplished from space or by establishing eavesdropping stations on the ground within range of an uplink terminal.

NSA documents in the Snowden archives show that the agency operated dozens such stations all over the globe in the previous decade.

However, it was deemed necessary to establish a “Site in the sky” to collect satellite uplinks when a ground station can not be established for whatever reason. PAN’s mission, starting with an 85-day checkout period, was to drift sufficiently close to satellites of interest and intercept whatever signals were beamed up to them, covering all conventional frequency bands in the C-, Ku- and Ka-Band.

The document is the first to tie the PAN satellite to a series of satellites codenamed NEMESIS – a designation first uncovered in a leaked U.S. government budget breakdown. Part of the High-Altitude Signals Intelligence branch, NEMESIS received a $500-million budget for Fiscal Year 2011 for what is now known to be the second satellite in the constellation, referred to as CLIO.

While no explanation for the acronym CLIO was offered, its mission was quickly connected to PAN given many parallels between the two including the Lockheed satellite platform and similar levels of secrecy surrounding its September 2014 liftoff from Florida’s Space Coast.

According to the MHS document, the inauguration of the NEMESIS satellites was expected to “open up new opportunities for discovery and will enhance collection efforts for the intelligence community into areas not previously explored.”

The document also included the first image of a modern Orion Electronic Intelligence Satellite, known as the largest satellites in the world with their huge antenna dishes to intercept communication intelligence from their high-altitude vantage points.

Advanced Orion satellites, also known by their codename Mentor, build on a program initiated in 1970 when the first ELINT satellites launched, back then featuring dishes 20 meters in diameter.

A pair of Orion satellites launched in 1985 and ’89 on the Space Shuttle and reportedly featured 50-meter antennas and were also tasked with the collection of missile signals. Upgraded in the 1990s to host even larger antennas, the program launched seven Advanced Orion satellites to date.

The MHS document provides some details on the mission of Orion 6, launched by the National Reconnaissance Office under the designation NROL-26 on January 18, 2009. After deployment into Geostationary Drift Orbit by a Delta IV Heavy rocket, the satellite was expected to be under the control of the Alice Springs Mission Ground Station in Australia for 59 days until it had drifted west to reach the range of Menwith Hill.

The document reveals Orion 6 was initially tasked with a survey of microwave sources in China before transitioning to the collection of data from the Thuraya satellite phone network which the NSA had breached some time in the early 2000s to listen in on satellite calls throughout Europe, Africa, Asia and the Middle East.

As detailed in the classified document, Orion 6 was to hand Thuraya duties off to another mission before drifting back to China to continue its survey ahead of ultimately taking on a mission covering the Middle East and North Africa – providing a first-hand glimpse into long-range mission planning in the Signals Intelligence community.