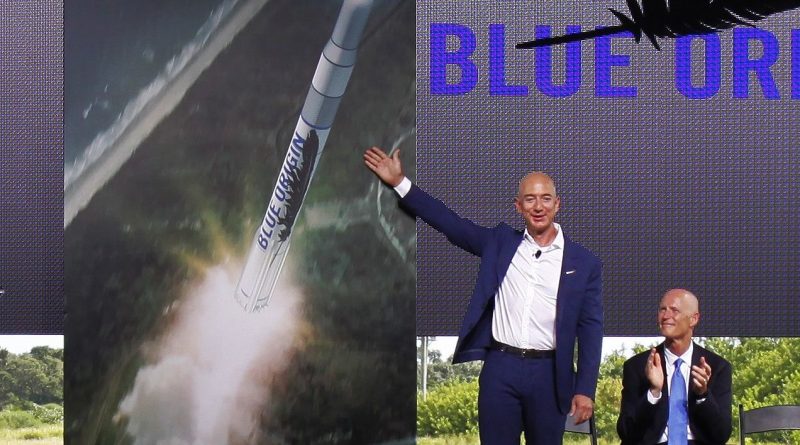 Blue Origin presented its planned ‘New Glenn’ Reusable Orbital Launch Vehicle to the world on Monday, outlining plans to launch the 95-meter tall rocket for the first time before the end of this decade.

In recent months, Blue Origin has been making great strides launching and re-launching the company’s New Shepard Sub-Orbital Launch Vehicle that is currently in the final stages of a multi-year testing campaign to be cleared for crewed missions to the edge of space. Amazon and Blue Origin founder Jeff Bezos noted that the company is sticking to a very careful and slow development approach in a stepwise process from small sub-orbital hops to a multi-stage reusable orbital rocket.

“In the long run, deliberate and methodical wins the day, and you do things quickest by never skipping steps,” Bezos wrote. “This step-by-step approach is a powerful enabler of boldness and a critical ingredient in achieving the audacious.”

Bezos unveiled plans for the rocket after four years of design and development work had gone into the ‘New Glenn’ Launch System, named in honor of John Glenn, the first American Astronaut to orbit the Earth.


New Glenn will be available in a two-stage version and a three-stage configuration, standing 82.3 and 95.4 meters tall, respectively. Seven meters in diameter, the first stage enlists the help of seven BE-4 engines, each generating a thrust of 2,450 Kilonewtons, consuming a combination of Liquefied Natural Gas and Liquid Oxygen. Firing up seven BE-4 engines will give New Glenn a liftoff thrust of 1,750-metric ton force.

The second stage will be powered by a BE-4 engine optimized for operation in vacuum outside the dense atmosphere while the upper stage would feature a 490-Kilonewton(+) BE-3 engine consuming Liquid Hydrogen and Liquid Oxygen. The two-stage version would be used for heavy-lift missions into Low Earth Orbit while the three-stage variant with its high-impulse upper stage can reach all types of orbits including escape trajectories.

The first stage booster of the New Glenn vehicle is designed to by fully reusable, envisioned to make a propulsive return to Earth to touch down atop landing legs ahead of being re-flown.

Bezos said the vehicle would be able to fly with commercial satellites as well as crewed spacecraft. Not yet revealed has been the mass of the New Glenn Vehicle, its payload capability, and where its first stage is going to make its propulsive landing.

New Glenn towers over any American launch vehicle that is currently active and, in fact, only falls short to the Saturn V Moon rocket and the Soviet Union’s unsuccessful N1.

New Glenn will take flight from Launch Complex 36 at Spaceport Florida, part of Cape Canaveral Air Force Station – a historic facility that hosted 145 launches of the Atlas family between 1962 and 2005. After retirement of the Atlas III rocket in 2005, the two pads’ umbilical towers were demolished and a number of prospective users expressed interest over the years before Blue Origin officially announced it would use LC-36 in September 2015.

New Glenn will be manufactured at a large facility at Exploration Park, outside the gates of Florida’s Kennedy Space Center, just 15 Kilometers from the company’s launch pad. Ground for the new facilities was broken earlier this year and Bezos hopes the 70,000-square meter manufacturing hall would open up before the end of 2017 with more facilities for manufacturing and processing to be added later.

As for the landing of the New Glenn booster, Blue Origin has not yet made any official announcements. However, earlier work suggested an approach of having the vehicle land on an ocean-going platform with launch site application documentation showing the landing location to be over 1,200 Kilometers downrange from the launch pad.

“Our vision is millions of people living and working in space, and New Glenn is a very important step. It won’t be the last of course,” Bezos wrote in his update. “Up next on our drawing board: New Armstrong. But that’s a story for the future.”

In the near-term, Blue Origin is progressing at full speed with the New Shepard suborbital vehicle which is set for its next flight in early October to demonstrate its critical In-Flight Abort capability.

The Crew Capsule’s pusher-type abort system has been extensively tested on the ground and in a successful pad escape test, but an in-flight abort test is needed to verify a crew can be transported to safety at any point in their journey.

The test will take place during the most challenging environment in the ascent, Maximum Dynamic Pressure – occurring at an altitude of around five Kilometers, 45 seconds after liftoff. Firing its solid-fueled escape engine immediately after redundant separation systems command the jettisoning of the booster, the Crew Capsule will complete a two-second acceleration combined with a divert maneuver to move away from the booster. The Crew Capsule will then deploy its Drogue and Main Chutes to make a soft landing.

The New Shepard booster, having already completed four trips to the edge of space and back, has only a small chance of surviving given the extreme environment at the abort – a rapidly changing aerodynamic environment and impingement by the abort engine plume.

Jeff Bezos said the In-Flight Abort test will be streamed live on the Internet.