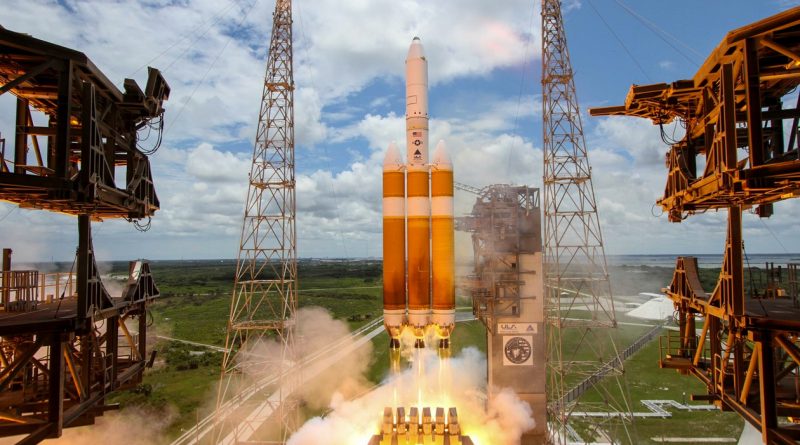 The contract modifications were announced on Friday and fall under a $11-billion block buy of cores inked back in 2013. Modifications add to pre-priced items purchased under the block-buy and include mission customization and special needs by the clandestine payloads.

The first contract modification announced on Friday is for $270.4 million: United Launch Alliance will provide a Delta IV Heavy rocket for liftoff in July 2020 for the launch of the NROL-82 satellite from Vandenberg Air Force Base in California. This mission will involve a next-generation optical intelligence-gathering spacecraft operating from a high-inclination orbit. These spacecraft are among the heaviest currently in operation by any country in the world and deliver ultra high-resolution imagery to inform U.S. intelligence agencies of activity on foreign soil.

The second modification of $146.5 million is for an Atlas V 551 rocket targeting liftoff in August 2020 from Cape Canaveral Air Force Station with the NROL-101 payload. Atlas V 551 is the most powerful version of the workhorse rocket, flying with five side-mounted Solid Rocket Boosters, indicating NROL-101 is a heavyweight satellite or headed to a high-energy orbit. No clues on the payload’s identity are currently available as no previous NRO payload utilized the 551 variant.


Both of these missions exceed the performance of SpaceX’s Falcon 9 rocket and certification of the Falcon Heavy has not been completed prior to the contract awards, making United Launch Alliance the only U.S.-based launch services provider capable of executing the launches. SpaceX did not protest a potential sole-source contract award for NROL-82 given the specific technical and performance requirements of these types of NRO missions.

SpaceX is targeting a late summer debut of the company’s Falcon Heavy rocket that will fly with three Falcon 9 first stages strapped together – a concept similar to ULA’s Delta IV Heavy that employs a trio of nearly identical booster cores. The first Falcon Heavy mission will employ a pair of previously flown side boosters and a brand new core stage; all three are hoped to be recovered after the mission via landings at Cape Canaveral and atop SpaceX’s drone ship. Qualification of Falcon Heavy for Department of Defense missions could come as early as 2018 based on schedules outlined ahead of the rocket’s long awaited debut.


SpaceX received contracts for a pair of GPS-III satellites in 2016 and earlier this year. The California-based company was the sole competitor for GPS III-2, but the III-3 contract marked the first face-off between SpaceX and ULA in the DoD launch business. A deciding factor in SpaceX winning over ULA was the lower launch price of the Falcon 9 rocket. The Air Force said SpaceX fulfilled all technical requirements, as did ULA, but the lower bid for Falcon 9 ultimately gave SpaceX the award.

SpaceX is currently gearing up for the company’s first NRO mission, set for liftoff atop a Falcon 9 rocket No Earlier Than April 16. The NROL-76 contract was shrouded in some mystery as SpaceX was only revealed as that mission’s launch services provider last year, some three years after the contract was signed.

Clues on the identity of NROL-76 are virtually non-existent for the exception that the mission will aim for a booster landing at Cape Canaveral’s Landing Zone-1, indicating Falcon 9 has plenty of surplus performance for a full boost-back maneuver. This would indicate the satellite is either aiming for a Low Earth Orbit or is a relatively light craft if headed to high-energy Molniya or GTO orbits. The launch azimuth, extracted from downrange safety areas, should reveal where the satellite is headed.

For ULA, a total of four NRO missions are on the books for 2017. The first was completed on March 1 with an Atlas V launching the NROL-79 payload from California, now revealed to be a pair of Naval Ocean Surveillance Satellites. The next mission, NROL-42, is set for mid-June, flying on an Atlas V 541 from Vandenberg and most likely involving a Trumpet electronic intelligence satellite. NROL-52 is targeting liftoff from Cape Canaveral in late August on an Atlas V 421 rocket, likely representing the next addition to the Space Data System that carries communications to and from the government’s secret space missions. Finally, NROL-47 will launch from Vandenberg atop a Delta IV in mid-October, possibly joining the FIA radar program.