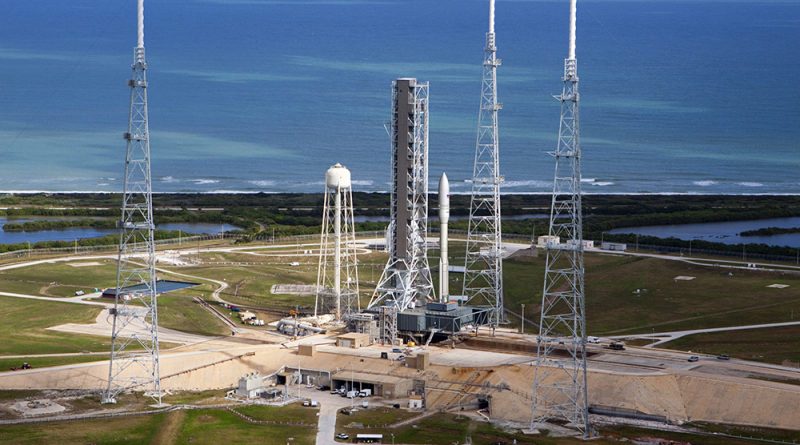 Orbital ATK on Monday announced major progress on the company’s Next Generation Launch System (NGL), outlining design details of an intermediate- and large-class space launch vehicle capable of serving the commercial and government launch market. The company said design of NGL’s first and second stages proceeded through Critical Design Reviews and progress was made outfitting a production facility for initial manufacture of prototypes of the vehicle’s large solid rocket motors.

Orbital ATK initiated NGL development in late 2015 in a program partially sponsored by the U.S. Air Force in an effort to accelerate the development of alternatives to Russian-built engine technology in use for most U.S. national security launches. Over the last 18 months, Orbital ATK and the Air Force invested over $200 million into NGL development, progressing through the majority of design work on the rocket’s lower stages and preliminary design of full vehicle and ground infrastructure.


“The Orbital ATK NGL team, which now numbers several hundred engineers and technicians, has made tremendous progress since late 2015.  Building on this work, we are looking forward to providing the Air Force and other customers with a highly-reliable and cost-effective launch system within the next four years,” said Scott Lehr, President of Orbital ATK’s Flight Systems Group.

The new launch system is intended to expand Orbital ATK’s current range of rockets from the small-class Pegasus and Minotaur and the medium-class Antares to intermediate- and heavy-lift vehicles. NGL is being designed to launch national security payloads, science missions and commercial satellites that exceed the lift capability of the company’s current line of launchers.


In addition to design work on NGL, Orbital ATK furnished a production facility with tooling to begin building prototype rocket stages and entered an agreement with NASA for the use of Launch Complex 39B at the Kennedy Space Center as part of the multi-user spaceport approach NASA initiated after the end of the Shuttle program. The company is also working out West Coast logistics to establish launch capability into polar orbits.

Orbital ATK highlights NGL’s use of heritage components from the company’s other launchers and products to reduce technical risk and development cost. At present, NGL is expected to move into production and testing in 2019 ahead of a first certification flight in 2021. The next milestone to keep the program on pace will come in 2018 with Launch Services Agreements by the U.S. Air Force.

Only SpaceX and ULA’s launch vehicles are currently certified for heavy-lift Department of Defense missions, but competition will become more fierce when Orbital ATK’s NGL and Blue Origin’s New Glenn enter the market at the start of the next decade. The U.S. Air Force requires two independent rocket families to ensure DoD missions have a ride to space even if one booster has to stand down long term.

The next-generation launch vehicle program under which Orbital ATK receives funding for NGL development was initiated to satisfy a desire of adding a third launch vehicle option. Other companies receiving funds under the same initiative are SpaceX, ULA and Aerojet Rocketdyne to accelerate the design and testing of new propulsion systems to end America’s reliance on Russian-built propulsion as soon as possible.

With Monday’s announcement, Orbital ATK also provided technical specifications of the NGL vehicle that will come in two variants known as the 500 Series and the 500XL Series with greater lift capacity. Both vehicle series consist of a pair of large solid-fueled stages with one to six boosters assisting in the initial flight phase and a cryogenic third stage delivering the final boost to orbit. The difference between the two vehicles is the sizing of the first stage, known as the Common Boost Segment.

The Common Boost Segment of NGL comes in a two-segment (Castor 600) and four-segment (Castor 1200) version and builds the distinguishing element between the 500 and 500 XL vehicle variants. Both versions are derived from the Space Shuttle Solid Rocket Booster, measuring 3.7 meters in diameter and standing 22 and 37.5 meters tall, respectively. The major change compared to the Shuttle-era boosters and those currently being developed for the SLS rocket is the switch from steel motor cases to carbon composite cases that reduce dry mass and eliminate the factory joints common for the Shuttle-class SRBs.

According to Orbital ATK’s product catalog, a two-segment version of the Shuttle-era RSRM would deliver an average thrust of 6,661 Kilonewtons over a 114-second burn while the larger four-segment version would generate 9,996kN of thrust and fire for 133 seconds.

The booster of choice for NGL is Orbital ATK’s GEM-63XL, a new, low-cost member in the company’s Graphite Epoxy Motor family. It takes advantage of existing designs and lessons learned over many years of GEM operations to lower production cost and increase the motor’s performance by stretching the composite case. GEM-63XL stands 21.89 meters tall, is 1.6 m in diameter and delivers more than 900kN of thrust over a burn of around a minute and a half. GEM-63/63XL has also been chosen by United Launch Alliance as a drop-in replacement for the Atlas V and the company’s Vulcan rocket.

The second stage of both NGL Series is known as the Castor 300, based on a one-segment Space Shuttle SRB but also switching to the composite case and employing HTPB-bound propellant instead of the heritage propellant formulation. Castor 300 stands 12.7 meters tall, is 3.7 meters in diameter and weighs around 140 metric tons. Orbital ATK documentation for a one-segment SRB version shows an average thrust of 3,572 Kilonewtons over a 116-second burn.

The third stage of Orbital ATK’s Next Generation Launch Vehicle will measure 5.25 meters in diameter and use Liquid Oxygen and Liquid Hydrogen propellants. It will employ a vacuum-optimized version of Blue Origin’s BE-3 engine generating a thrust of 534kN with deep-throttle and re-start capability in order to support direct injection missions to Geostationary Orbit. NGL will support payload fairing designs five meters in diameter and 15 or 20 meters in length, providing enough room for the largest satellites currently on the market.