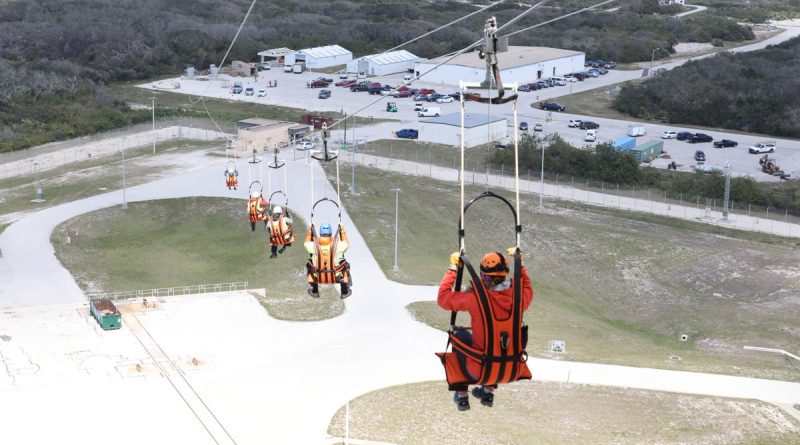 A zip line system designed to carry astronauts to safety in case of an on-pad anomaly finished installation into the Crew Access Tower at Cape Canaveral’s Space Launch Complex 41 from where crews will take off aboard Boeing’s Starliner spacecraft as early as 2018 atop Atlas V rockets.

The potentially life-saving contraption, formally known as the Emergency Egress System (EES), will provide astronauts with a quick exit strategy to rapidly move out of harm’s way in the event Atlas V encounters a serious anomaly with a crew sitting atop. EES works with the traditional slide wire concept, but upgrades from baskets for multiple crew members used in the Shuttle era to a zip line that takes individual astronauts to safety.

“ULA is absolutely focused on the safety of the crews we will be supporting, and, although we hope to never use it, we are excited to announce the Emergency Egress System is fully operational,” said Gary Wentz, ULA vice president of Human & Commercial Services.


While the highlighted role of the EES is for astronauts to escape, the system is also available for engineering teams working on the upper sections of the rocket in the days ahead of liftoff.

Outfitting Space Launch Complex 41 for crewed missions began in 2015 when construction of the Crew Access Tower started. Seven pre-fabricated metal tiers were stacked at SLC-41 with work scheduled around Atlas V missions that continued regularly throughout the outfitting process.

Completion of the 60-meter tall structure was marked in August 2016 when the 15-meter long, 40-metric ton Crew Access Arm and Astronaut White Room was hoisted up the tower for installation.

Emergency Egress Systems have been a critical part of launch pad infrastructure since the Apollo days when workers and Astronauts were to take a high-speed elevator for a 30-second ride from the top of the rocket down to pad level where they would slide down a chute to reach a blast-proof room 12 meters below the launch pad – reinforced to withstand the explosion of a fully-fueled Saturn V rocket and furnished with oxygen candles, CO2 scrubbers and supplies to sustain 20 people for 24 hours. The two “rubber rooms” exist below the Launch Complex 39 pads to this day.

A second astronaut evacuation option was added in the later part of the program in the form of a single slide wire cab to transport a three-person crew out of the Blast Danger Area and to a bunker where they would have waited for rescue.

As part of the conversion of LC-39 for the Space Shuttle, each launch pad’s Fixed Service Structure received seven slide wire baskets to evacuate crews and personnel from the 195-foot level in the event the Shuttle suffered a critical anomaly during final countdown or ignition. Located at the base of the slide wire system was a bunker as well as an armored personnel carrier to take crews and workers to safety. The Shuttle-era EES was never required, but all Shuttle crews went through rehearsals of moving from the orbiter into the baskets to ensure evacuation procedures were known by all parties.

The critical requirements for Emergency Egress Systems are threefold: The system has to be reliable, fast and operate passively in case power supply to the launch pad is cut by the emergency. ULA and Boeing began evaluating possible EES designs in 2012 with proposals ranging from slide wire gondolas to a roller-coaster-like system with cars on a track, however, the most-effective design was found to be a zip line-type system.

Terra-Nova, a company that builds zip lines for recreational use, was contracted by ULA to design a modified zip line design suitable for the SLC-41 EES, employing off-the-shelf hardware meeting ULA’s reliability needs. Four egress cables are situated on Level 12 of the Crew Access Tower, 52.5 meters above the pad deck and lead to a landing zone 400 meters from the access tower. The system can accommodate up to 20 personnel, accounting for up to seven crew members flying on the Starliner and White Room personnel present at the pad after the rocket is loaded with propellants.

The riders reach a top speed of 65 Kilometers per hour and each individual can control their speed via handles, coming to a gentle stop in the landing zone. Ten meter long springs in each cable further ensure riders slow down gradually in the landing area. Practice runs on a training system and the operational EES will be a part of flight training before launch on the Starliner spacecraft.

“Crew safety is paramount, and the ULA Emergency Egress System hits the mark for an effective yet simple system that is adapted from other commercial applications,” said Chris Ferguson, Boeing director of Starliner Crew and Mission Systems and a former NASA astronaut. “We look forward to spaceflight operations next year knowing that every measure to protect the flight and ground crew has been employed.”