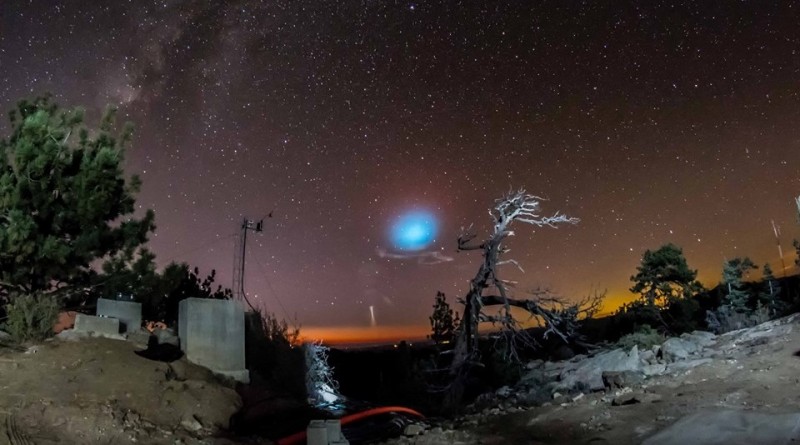 The test launch of a Trident II submarine-launched ballistic missile wowed observers along California’s coast line Saturday night as a bright, expanding cloud was seen in the sky. The Trident was launched from the USS Kentucky off the coast of California without prior notice leading to the usual speculation among observers of what transpired high in the skies as numerous videos and photos were posted on the Internet.

The Trident II or Trident D5, operated by the U.S. Navy and the British Royal Navy, is built by Lockheed Martin Space Systems and is 13.6 meters long and 2.1 meters in diameter with a mass of 59 metric tons. It consists of a three-stage stack of solid rocket motors that propel the vehicle to a speed of up to Mach 24 for an operational range of over 12,000 Kilometers. Trident II can carry up to 14 thermonuclear Multiple Independently Targetable Re-entry Vehicles that can be targeted with an accuracy better than 100 meters.


Trident II made its first test launch in 1987 and reached its initial operating capability in 1990. Over 500 missiles were built to date and around 150 have been test launched in a program that is expected to remain in service until the 2040s.

Saturday’s test launch occurred at around 6 p.m. local time (2 UTC on Sunday), around one hour after the local sunset.

The Federal Aviation Administration had announced earlier on Saturday that the U.S. military activated off-shore airspace, requiring nighttime flights in and out of Los Angeles International Airport to remain clear of the Pacific Ocean west of the airport. According to media reports, the test was part of an ongoing systems evaluation test and took place from the USS Kentucky, an Ohio-class submarine.

Observers report seeing the ascending vehicle as a small bright dot moving across the sky with a faint contrail before a staging event took place and a bluish glow started as a sun-lit gas cloud began expanding around the missile. The white cloud of exhaust gas lingered for around five to ten minutes before fading.