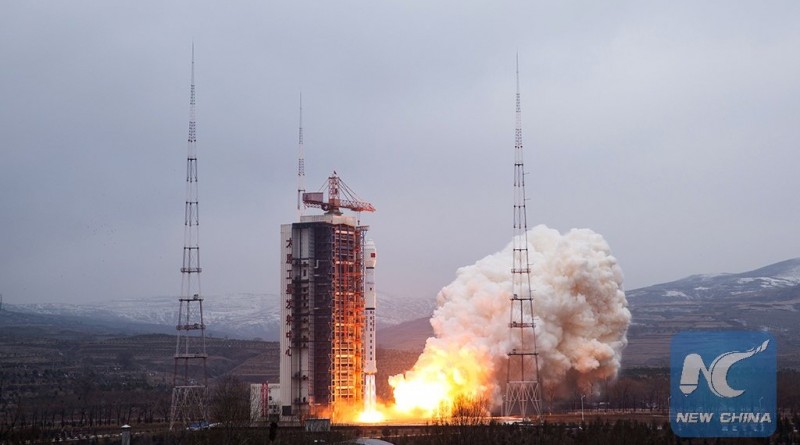 China conducted a secretive space launch on Sunday, lofting a military reconnaissance satellite into orbit. The Long March 4B rocket carrying the Yaogan-28 satellite lifted off from the Taiyuan Satellite Launch Center at 7:06 UTC with no prior notice from official channels, not even the usual Navigational Warnings for air traffic.

This secretive mission comes just days after the most recent Chinese launch of a Long March 3B that boosted the ChinaSat-2C satellite to Geostationary Transfer Orbit on Tuesday. Officially reported to be a communications satellite delivering TV and data services, the ChinaSat-2C spacecraft in all likelihood belongs to the Shentong-2 series of strategic communications satellites operated by the People’s Liberation Army for government and military use. The story for Yaogan-28 is not as complicated since the Yaogan satellite series, despite being advertised as a civilian remote sensing satellite constellation, is known to be a military-operated project for the collection of Earth imagery using either optical imaging payloads, radar imagers or electronic intelligence payloads.

The consensus among western observers is that Yaogan is used for military reconnaissance on a global scale, based on information released by Chinese sources and the observed structure of the satellite constellation as well as its launch rate that overshadows any civilian program – by far.

The first Yaogan satellite was launched in April 2006, carrying a first generation Synthetic Aperture Radar imaging payload. The first optical satellite entered orbit in May 2007, marking the beginning of a steady launch rate in the Yaogan program.

The Yaogan 9 mission introduced multi-satellite missions to the Yaogan program as a trio of satellites was spotted in orbit. The three spacecraft entered a a highly choreographed, triangular constellation in a 1,080 by 1,100-Kilometer Orbit at an inclination of 63.4 degrees – resembling the US NOSS triplets that were used for electronic intelligence purposes until being replaced by duos of NOSS (Naval Ocean Surveillance System) starting to be launched in 2001. A total of five Yaogan triplet launches have taken place to date (9, 16, 17, 20, 25).

Yaogan 14, launching in 2012, entered a unique position within the Yaogan constellation, showing the lowest orbital altitude of all operational satellites at around 475 Kilometers. Furthermore, Yaogan 14 used a unique launch vehicle configuration, requiring the Long March 4B rocket to be outfitted with a 3.8-meter payload fairing.

Sunday’s launch came without official notice, though information made its way out in the days leading up to the mission. Lifting off from Taiyuan at 7:06 UTC, the Long March 4B executed a successful ascent mission, as confirmed by official press reports issued around two hours after the launch.

The launch time of Yaogan 28 matched that of Yaogan 14 lofted in 2012 and Long March 4B flew with the characteristic 3.8-meter fairing as seen in photos of the launch – confirming that Yaogan-28 is the second Yaogan 14-class satellite.

Object A represents the Yaogan 28 satellite while Object B is the spent CZ-4B upper stage that conducted an orbit reduction maneuver after spacecraft separation and is due for re-entry soon. The low insertion orbit provides further proof of the satellite’s identity.

The CZ-4B launch vehicle is 45.8 meters in length and 3.35 meters in diameter. It has a launch mass of 249,200 Kilograms. The Long March 4B is based on the CZ-4 Family of launch vehicles and was developed by the Shanghai Academy of Space Flight Technology. Development of the Launcher began in 1989 and the CZ-4B completed its maiden flight on May 10, 1999 with the Fengyun 1C Weather Satellite.