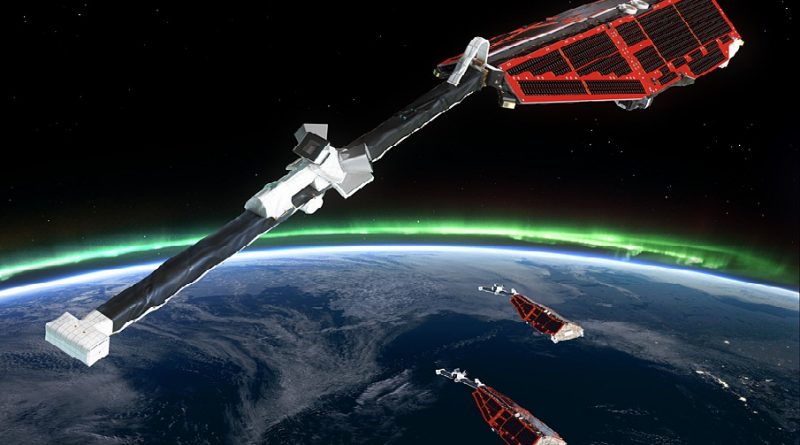 Following their launch and early operations phase in November 2013, Swarm transitioned to a commissioning phase of three months during which the three spacecraft were put through their paces to ensure all satellite systems and the high fidelity science payloads were functioning properly. No problems that could immediately impact the mission were found and the three spacecraft started a precisely planned orbital adjustment campaign in February 2014.

Launched together aboard a Rockot/Briz-KM rocket, all three Swarm satellites entered an identical orbit of 490 by 501 Kilometers at an inclination of 87.55 degrees. A collision right after satellite separation from the launch vehicle was avoided by the payload adapter that separated the satellites into slightly different directions.

From that point on, the control of the satellites was in the hands of ground controllers that had a lot of work ahead of them since the Swarm measurement principle requires the three spacecraft to enter precise orbits.

In order to accomplish the mission’s science goal of measuring Earth’s magnetic field on small and large scales at high resolution, both spatial and temporal, the orbit of the Swarm mission had to be designed very carefully. For a precise determination of large-scale magnetospheric field properties which is required for better separation of core and lithospheric field components as well as induction studies, the Swarm satellites should fly in orbital planes that are separated by three to nine hours local time.

To achieve a high resolution of lithospheric magnetization mapping, the satellites should fly as low as possible, but the Swarm mission also has to achieve a minimum mission duration of four years and three months without any of the satellites decaying. Also, to achieve global coverage, Swarm should target an orbit with an inclination of close to 90 degrees.

The Swarm constellation has been designed to have three satellites flying in slightly different, but precisely maintained orbits. Satellites A and C are in a similar orbital plane at an inclination of 87.35 degrees. The satellite pair operates at an orbital mean altitude of 462 Kilometers. The two satellites have an east-west separation of 1 to 1.4 degrees (=difference in Right Ascension of Ascending Node). Additionally, the two satellites are required to orbit in close formation with a desirable differential delay of 10 seconds, but no closer than two seconds on-track to avoid collisions.

This constant drift causes the orbital planes of the two segments to start moving apart which causes a difference in local time at which the satellites overfly a given location.

After three years, the Swarm B satellite crosses the plane of the A&C spacecraft at an angle of 90 degrees and four years into the mission, the separation between the segments is about 9 hours local time.

Starting in February 2014, the three satellites parted ways as Swarm A and C began dropping to their operational orbits and started out of plane maneuvers to reduce their orbital inclination. Swarm B did the exact opposite – beginning an orbit-raising campaign while increasing its inclination.

Originally, the Swarm A and B satellites were supposed to be building the low-orbiting tandem, but when the backup magnetometer failed on spacecraft C, teams decided to mitigate the risk of running into problems with the C vehicle by placing it in the lower orbit. Although the primary magnetometers of all three satellites are working fine, the failure of the backup unit on Swarm C leaves the vehicle in a non-redundant configuration. To avoid a loss of science data in the event the primary system fails, teams re-assigned the roles of the spacecraft – making sure the single spacecraft in the higher orbit had a redundant magnetometer.

With orbital adjustments complete for all three satellites, Swarm could begin science operations. From a propellant standpoint, the mission is doing extremely well and teams are hopeful to extend the mission as Swarm had an on-target insertion by its launcher and the orbit adjustment went as planned, leaving the vehicle with more fuel than expected.

In April, Swarm started the acquisition of calibrated science data. The mission team has already released a global magnetic field map using some of the measurements acquired during the Swarm commissioning phase.

The model is in excellent agreement with the previous map acquired by the Champ mission that observed the magnetic field for a decade. Data from Swarm is expected to significantly improve the quality of the existing model.

Each Swarm satellite carries a Vector Field Magnetometer that accurately measures the magnetic field vector, the Absolute Scalar Magnetometer that measures the overall strength of the magnetic field, the Electric Field Instrument that characterizes the electric field around the Earth by measuring the plasma density, drift, and acceleration at high resolution, and a Micro Accelerometer that measures non-gravitational perturbing accelerations with temporal and spatial variability leading to air density, wind, drag and solar pressure measurements.

During the initial phase of the science mission, teams will continue fine-tuning the sensors of the satellites to eliminate noise that is currently seen in the data delivered by the sensors.

The primary objective of the Swarm mission is to provide the best survey of the geomagnetic field with multi-point measurements enabling the examination of the magnetic field’s temporal evolution to gain new insights into the Earth system, improving the understanding of the planet’s interior and climate. Swarm will study planetary core dynamics, geodynamic processes and core-mantle interactions – seeking to improve the models of the core field dynamics by making long-term measurements with high spatial and temporal resolution.

Also, Swarm will examine lithospheric magnetization, provide models of the three-dimensional electrical conductivity of the Earth’s mantle, and conduct simultaneous measurements of the currents flowing in the magnetosphere and ionosphere at different altitudes and local times.