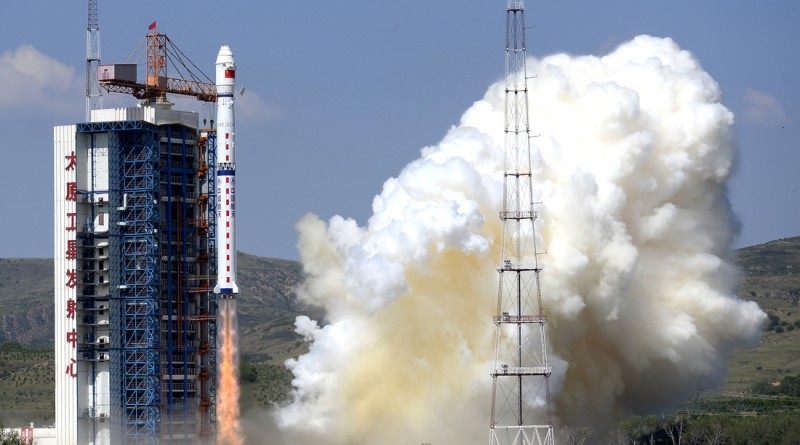 A Chinese Long March 4C rocket blasted off from the Taiyuan Satellite Launch Center on Thursday at 2:31 UTC, carrying the Yaogan 27 reconnaissance satellite to orbit. Chinese officials declared the launch a success about one hour after liftoff and orbital data confirms the identity of the satellite, that is kept secret by officials, as an optical reconnaissance spacecraft.

No prior announcement was made regarding the launch, a pattern typical for Yaogan military satellite launches out of Taiyuan, located in the Shanxi Province.

The Yaogan satellite constellation is officially classified as a civilian Earth observation mission dedicated to carrying out scientific experiments, surveying land resources and crop yield, and monitoring disasters. However, the consensus of outside and inside observers is that Yaogan is used for military reconnaissance on a global scale. This conclusion is based on information released by Chinese sources and the observed structure of the satellite constellation as well as its launch rate that overshadows any civilian program – by far.

The Yaogan satellites either carry electro-optical imaging payloads, Synthetic Aperture Radar systems for all-weather imaging, or Electronic Intelligence payloads that are used to track activity on foreign territory including the tracking of ships across the oceans.


The Yaogan Program saw its first launch in April 2006 when Yaogan-1, a first-generation radar satellite, was launched by a Long March 4B. The first optical satellite launched in May 2007 atop a Long March 2D.

Yaogan 8, launching in 2009, added another type of optical satellite to the constellation, operating in an orbit higher than all other Yaogan satellites reaching an altitude of 1,200 Kilometers at an inclination of 100.5 degrees. The satellite also carried an optical payload and was followed by Yaogan 15, 19 and 22 that also entered this type of orbit.

Yaogan 9 brought a big surprise in 2010 when instead of a single satellite, three spacecraft were delivered to orbit in a single Long March 4C launch. The three spacecraft entered a a highly choreographed, triangular constellation in a 1,080 by 1,100-Kilometer Orbit at an inclination of 63.4 degrees – resembling the US NOSS triplets that were used for electronic intelligence purposes until being replaced by duos of NOSS (Naval Ocean Surveillance System) starting to be launched in 2001. A total of five Yaogan triplet launches have taken place to date (9, 16, 17, 20, 25).

The Yaogan 14 spacecraft launched in 2012 has been seen in a unique role, becoming to only Yaogan satellite to enter an initial operational orbit below 475 Kilometers in altitude, carrying an optical payload.

As per the usual procedure, no information on the satellite’s identity and orbit was provided by Chinese officials. Orbital data released through U.S. Space Surveillance shows the upper stage of the Long March 4C rocket to have reached an orbit of 1,065 by 1,205 Kilometers inclined 100.46 degrees.

This orbit matches that of the Yaogan 8, 15, 19 and 22 satellites, both in altitude and inclination, confirming that Yaogan 27 belongs to this group of 3rd generation electro-optical satellites. Another peculiarity of this satellite series is the use of a 3.35-meter payload fairing on the CZ-4C rocket which can be seen in the images released of this launch.

The Long march 4C Launch Vehicle that was used for the Yaogan-27 launch is part of China’s flight proven Long March Rocket family.

It is derived from the CZ-4B Launcher, but features a re-startable upper stage and can accommodate a larger Payload Fairing. It is operated from the Jiuquan and Taiyuan Satellite Launch Centers.

CZ-4C has a liftoff mass of 250,000 Kilograms and is 45.8 meters in length with a diameter of 3.35 meters. It features several improvements over the CZ-4B such as new telemetry, tracking, control, and self-destruction systems that are smaller in size. The first stage of the vehicle is powered by a YF-21B Rocket Engine which consists of a cluster of four YF-20B Engines each providing 814 Kilonewtons of Vacuum Thrust.