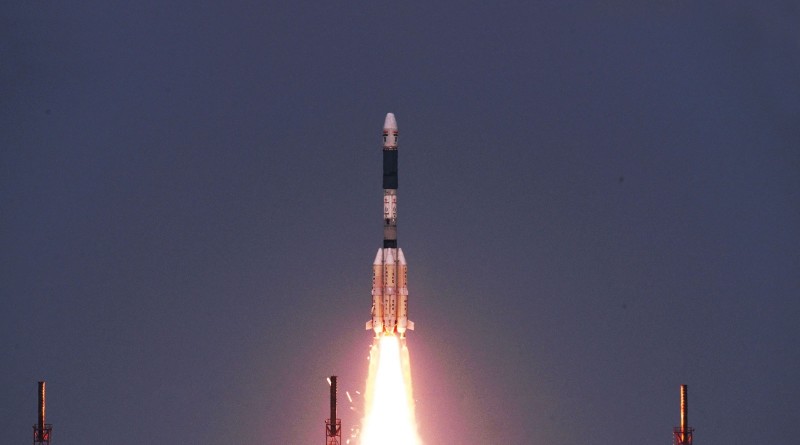 “The naughty boy has been tamed” cheered Indian rocket scientists on Thursday after the successful launch of the Geostationary Satellite Launch Vehicle, lifting GSAT-6 into a Geostationary Transfer Orbit in the first ever back-to-back success for the GSLV Mk. II launch vehicle. Hopes are high that GSLV will be able to keep up a high success rate from now on following a troubled start to its career that required a significant re-design of the vehicle to put the program back on a path to success.

Blasting off from the Satish Dhawan Space Center at 11:22 UTC, GSLV completed a mission of 17 minutes that went without issue through the propulsive phase of the mission including 12 nervous minutes during the operation of India’s Cryogenic Upper Stage that had been the most challenging element of GSLV during its lengthy development and improvement. With GSLV checking off its next success, ISRO aims to increase the vehicle’s launch rate and soon put it in operational service, allowing it to launch more valuable payloads including future interplanetary missions. GSLV is hoped to become India’s workhorse for Geostationary Satellite launches, ending the country’s reliance on foreign launchers to deliver their heaviest satellites.

The GSLV project was off to a very rough start with only two successful flights out of seven missions between 2001 and 2010 with failures occurring on every major part of the rocket ranging from control system issues and structural deficiencies to problems with the new cryogenic engine. Therefore, GSLV was grounded for three years for a top-to-bottom review that resulted in numerous design improvements and a thorough testing campaign involving the Cryogenic Upper Stage. GSLV returned to the launch pad in 2013, but its return to flight mission was pushed to 2014 due to a leak on the second stage.


Eventually, GSLV blasted off on its long-awaited return to flight and finally managed to achieve a fully successful mission. To demonstrate that this success did not come by chance, ISRO pressed on to the D6 demonstration mission with preparations beginning earlier in the year when GSLV was assembled at the launch site.

The 49-meter tall GSLV rolled out to its launch pad last week and headed into countdown operations on Wednesday, 29 hours prior to liftoff. Being hooked up to the various ground interfaces, GSLV entered a final round of detailed testing before teams initiated propellant loading operations on the second stage that received 39,400 Kilograms of hypergolic propellants, Unsymmetrical Dimethylhydrazine and Nitrogen Tetroxide. Overnight to Thursday, the four boosters were each loaded with 42,600 Kilograms of hypergolics.

When the stages using storable propellants had finished tanking, final hands-on work was completed by teams to close out the rocket and all ground systems. The pad was subsequently cleared and the Launch Team reported to console to work through the final setup tasks to place all ground and vehicle systems in a launch configuration. Around 90 minutes prior to launch, the Cryogenic Upper Stage entered propellant loading, receiving 12,800 Kilograms of Liquid Oxygen and Liquid Hydrogen. Once reaching flight level, cryogenics were replenished until late in the countdown. Also, the GSLV was put through electrical testing and communication checks were run before the flight software was loaded into the flight computer.

Over the final half hour of the count, the GSAT-6 satellite was transitioned to internal power and switched to its flight mode. GSLV received its flight software package and all stations verified launch readiness that was reported to the Mission Director who approved GSLV for liftoff at L-19 minutes. The Automated Countdown Sequence was initiated at T-12 minutes to put GSLV through the final steps ahead of liftoff, namely the termination of LOX and LH2 topping, the pressurization of tanks in the boosters, the second and third stage, the transfer to internal power and finally the transition to GSLV’s computers occurring thirty seconds before launch.

At T-4.8 seconds, the four L40 boosters ignited their Vikas 2 engines to allow the engines to build up thrust and be monitored for a brief moment before the launcher was committed to flight by igniting the S139 core stage.

S139 ignition occurred at 11:22:00 UTC and GSLV jumped off its pad with a total thrust of 800 metric-ton force, the majority of which was delivered by the massive solid-fueled core stage. Following liftoff, GSLV rose vertically for just a few seconds before beginning to pitch and roll onto a precisely calculated course taking the rocket to the south-east across the Indian Ocean, targeting a Low Inclination Orbit.

Mission Controllers reported a good performance of the launch vehicle as it pushed through Mach 1, burning 2,425 Kilograms of propellants each second of powered flight. Thrust on the S139 stage began tailing off one minute and 49 seconds into the flight after it burned 139,000 Kilograms of propellants to help GSLV get off the ground. The four L40 boosters continued to operate, carrying the dead weight of the empty core stage with them.

Each of the L40 boosters was carrying 42,000kg of propellants being 2.1 meters in diameter and 19.7 meters long powered by a single Vikas 2 engine that provided 77,800kgf of thrust. Booster shutdown came at T+2:29. Staging between the first and second stage of the GSLV was accomplished in hot-staging mode – igniting the second stage prior to firing the stage separation system to enable the spent first stage to be pushed away by the engine exhaust of the second stage.

Good staging was confirmed at T+2:31.5 and the Vikas 4 engine of the second stage ignited as expected, reaching its nominal thrust of 81,500-Kilogram force to continue pushing the stack into orbit. The boosters and first stage accelerated the vehicle to a speed of 2.4 Kilometers per second, carrying it to an altitude of 72 Kilometers. The second stage of the GSLV is 2.8 meters in diameter and 11.56m long with a liftoff mass of about 45,000kg.

Just six seconds into the burn of the second stage, GSLV enabled Closed Loop Control after the Core and Boosters were commanded according to a pre-programmed attitude profile to navigate through winds in the upper atmosphere. Closed Loop Control allowed the second stage to actively modify its flight profile to correct any errors that may have occurred during the operation of the first stage and boosters.

With the second stage up and running, the vehicle was well on its way out of the dense atmosphere, passing 115 Kilometers at T+3 minutes and 50 seconds. At that point, the protective 3.4-meter payload fairing was jettisoned by firing pyrotechnics that split the fairing halves open, allowing them to rotate outward before cleanly departing the launch vehicle. With GSAT-6 exposed for the rest of its journey, the big moment was drawing closer – the ignition of the Cryogenic Upper Stage.

The second stage concluded its task at T+4 minutes and 51 seconds, burning two seconds longer than predicted. 2.7 seconds later, pyrotechnics were fired and the second stage was pushed away from the stack to clear the way for the ignition of the CE-7.5 engine of the third stage which was commanded at T+4 minutes 55.5 seconds. It took another ten seconds to confirm that ignition had taken place and the engine reached its high-thrust setting at 9,500kgf.

The initial portion of the upper stage burn was completed in high-thrust mode before the engine throttled back to its rated thrust setting at 7,500 Kilogram-force. India’s first cryogenic stage is 2.8 meters in diameter and 8.7 meters long – equipped with a single fixed main engine and two 2-Kilonewton vernier engines that were gimbaled for vehicle control.

It was a nervous 12 minutes for Mission Controllers, watching over the performance of the third stage that had been the most challenging element of the GSLV launch system. Throughout the burn, the engine showed good performance and the Guidance System kept the vehicle right on the planned ascent trajectory. GSAT-6 was aiming for an orbit of 170 by 35,975 Kilometers inclined 19.95 degrees. When GSLV sensed it had reached its cutoff target, it commanded the engine to shut down just shy of 17 minutes into the mission.

The third stage very quickly dampened any attitude rates to set up for spacecraft separation just 12 seconds after engine cutoff. Spacecraft separation was confirmed and loud cheers emerged at Mission Control when the success of the GSLV D6 mission was announced. The vehicle achieved an orbit of 170 by 35,945 Kilometers at an inclination of 19.96° – very close to the expected parameters.

For GSAT-6, the first steps in orbit were the deployment of its power-generating solar arrays and the acquisition of attitude control. The satellite will complete orbit-raising maneuvers in the coming days, relying on the Liquid Apogee Engine, to be followed by the deployment of the six-meter antenna reflector designed by ISRO, flying for the first time on this mission.

GSLV is expected to conduct its next mission in mid-2016 when it will loft the GSAT-9 communications satellite. For the Indian Space Research Organization, the high launch pace of 2015 will continue with PSLV – currently in the midst of preparations for liftoff at the end of September carrying the AstroSat-1 payload plus small secondary payloads.

GSAT-6 is the 25th Geostationary Communications Satellite built by the Indian Space Research Organization, joining the group of operational communications satellites stationed over India. The satellite provides a combination of a national beam in C-Band and high-capacity S-Band spot beam coverage.

The GSAT-6 spacecraft has a launch mass of 2,117 Kilograms, measuring 2.1 by 2.5 by 4.1 meters in size when in its stowed launch configuration. It has a dry weight of 985 Kilograms and carries 1,132 Kilograms of propellants for the climb to Geostationary Orbit and stationkeeping operations. The spacecraft is based on the I-2K satellite platform that features two deployable solar arrays generating 3100W of power, batteries for power storage along with avionics and data handling equipment as well as a propulsion unit and navigation equipment. GSAT-6 is the first Indian communications satellite to use a 70-Volt main power bus employing a number of changes in its power and avionics system to create a modern satellite system with increased capabilities.

The satellite is equipped with a Liquid Apogee Motor. It provides a thrust of 440 Newtons and uses Mixed Oxides of Nitrogen as fuel and Unsymmetrical Dimethylhydrazine as oxidizer. The engine operates and an mixture ratio (O/F) of 1.65 and has a nozzle ratio of 160. The engine’s injector is a co-axial swirl element made of titanium while the thrust chamber is constructed of Columbium alloy that is radiatively cooled. The engine is certified for long firings of up to 3,000 seconds. The Propellants are stored in spherical tanks that are pressurized with Helium.

The C-Band system delivers a national beam to provide coverage across the entire subcontinent of India as well as some surrounding territories. The S-Band system sports a large deployable antenna with a diameter of six meters, to date the largest antenna realized by ISRO. The S-Band system generates five spot beams over the Indian main land employing the frequency reuse scheme to increase the efficiency of the spectrum utilization.

The GSAT-6 satellite will primarily deliver Satellite Digital Multimedia Broadcasting services to mobile phones and mobile video/audio receivers used in vehicles. The satellite’s capacity can also be used for strategic and social applications.

The GSAT-6 spacecraft is expected to operate for at least nine years from an orbital position of 83 degrees East.