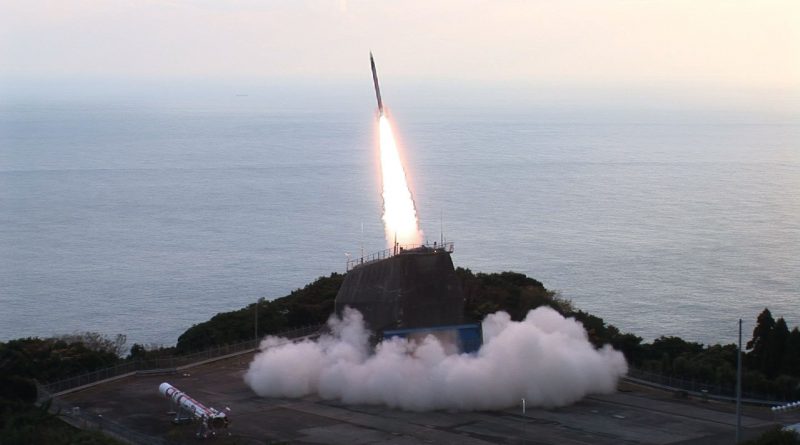 Japan plans to launch the smallest orbital space launch vehicle ever flown on Saturday, lifting into orbit a tiny satellite of only 3 Kilograms. The launch of the SS-520-4 modified sounding rocket is planned at 23:33 UTC from the Uchinoura Space Center and will carry into orbit the TRICOM-1 CubeSat, dedicated to Earth-imaging and store-and-forward communications.

The mission was delayed from Tuesday (UTC) due to a late countdown abort caused by unfavorable winds. Liftoff has since been reset for Sunday, 8:33 a.m. local time.

The experimental SS-520-4 is based two-stage SS-520 sounding rocket and adds a solid-fueled third stage to be able to send a small payload into orbit. The SS-520 has flown twice to date – carrying out sub-orbital missions in 1998 and 2000 with scientific packages reaching a peak altitude of 700 and 1,000 Kilometers, respectively, before falling back towards Earth. The SS-520 uses the base design of the single-stage S-520 sounding rocket that has flown 29 times since 1980 on science missions and technology demonstrations.

SS-520-4 stands 9.54 meters tall, is 52 centimeters in diameter and weighs only 2,600 Kilograms at launch – making it the world’s smallest orbital launch vehicle, surpassing the Japanese Lambda-4S vehicle which had a launch mass of 9,400kg and could transport 26 Kilograms into orbit.


SS-520-4 is operated as a one-off project by the Japanese Aerospace Exploration Agency to collect data for a future Ultra-Small Satellite Launch Vehicle that could enter regular operation for the launch of CubeSat or Nanosatellite missions.

The trend toward smaller and smaller satellites has picked up speed in recent years as technology evolved and instruments, such as Earth-imaging systems, were miniaturized to fit the CubeSat standard for application in numerous fields such as Earth-observation, meteorology, & maritime/aeronautical monitoring. A vehicle capable of launching 3 CubeSat Units for under $400,000 will likely have a market, especially for satellites requiring unusual orbits or a specific launch time.

Stage 1 fires the rocket off the ground and burns for 31.7 seconds, accelerating SS-520-4 to a speed of 2.0 Kilometers per second. Next is a relatively long coast phase during which the payload fairing separates (T+65 seconds, 78km in altitude) and the first stage is jettisoned (T+66 seconds).

The second stage of the rocket is the standard SS-520 second stage which features a composite motor case and measures around 1.7 meters in length, using the same diameter as the first stage. A dynamic navigation algorithm kicks in at T+2 minutes and 37 seconds to measure the current state of the vehicle and calculate the optimized ignition time for the second stage.

The second stage burn begins around two minutes and 50 seconds into the flight when the vehicle will be 174 Kilometers in altitude, its speed having decreased to 1.1km/s. Stage 2 employs spin stabilization and burns for 24.4 seconds, in the process consuming 325 Kilograms of solid propellant. A 5.7-liter, 230-bar Nitrogen tank on the second stage feeds four thrusters in charge of setting up the correct attitude for the second stage burn and then spinning the stack up for stabilization.

Stage 2 accelerates the rocket to a speed of 3.6 Kilometers per second and separates three minutes and 45 seconds into the mission, at an altitude of 175 Kilometers. The orbital insertion is completed by a small third stage placed atop the SS-520 sounding rocket stack. It is 0.8 meters long and holds 78 Kilograms of propellant that will be consumed over the course of a 25.6-second burn starting three seconds after separation from the second stage and increasing the rocket’s speed by 4.5 Kilometers per second.

The SS-520-4 mission is targeting an orbit of 180 by 1,500 Kilometers at an inclination of 31 degrees. Separation of the TRICOM-1 satellite is expected 7 minutes and 30 seconds into the mission at an altitude of 201 Kilometers and 1,820 Kilometers downrange from the Uchinoura Space Center.

The TRICOM-1 CubeSat complies with the 3U form factor, but unlike the vast majority of CubeSats, it is not ejected from a deployment tube and instead features a base-mounted separation system interfacing with the upper stage of the launch vehicle via a central separation bolt.

TRICOM-1 was developed by the University of Tokyo and measures 11.6 by 11.6 by 34.6 centimeters in size with a mass of 3 Kilograms. The satellite uses body-mounted solar cells for power generation and operates in spin-stabilized mode. Five Earth-imaging cameras are installed on the CubeSat and a Store and Forward communications terminal can pick up data packets from a ground station and downlink it upon command from another ground station on a different part of the planet.

If hitting its target orbit, TRICOM-1 is expected to be operational for one to three months before succumbing to orbital drag and re-enter the atmosphere.