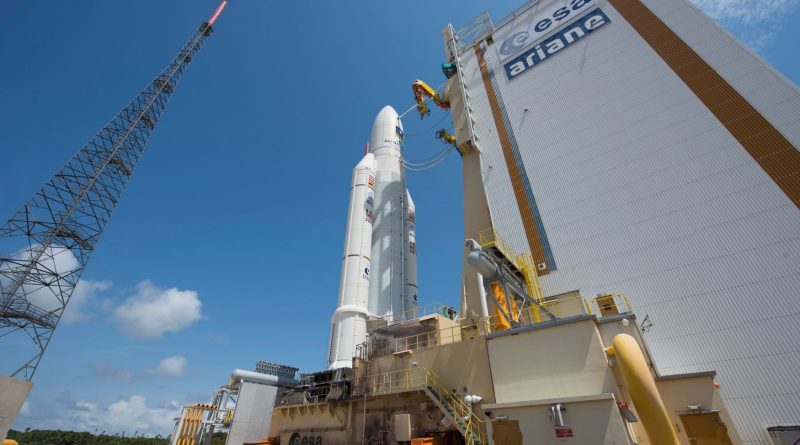 Arianespace plans to build on a successful year 2016 with a sustained launch pace in 2017, opening the year with two new launch contracts for television and broadband satellites to ride into orbit aboard the company’s Ariane 5 rocket in 2018 and 2019.

The French-based launch services provider announced last week two new launch contracts from satellite operators Sky Perfect JSAT and Intelsat, and also outlined a busy manifest for 2017 with a dozen launches planned from the company’s space port in French Guiana. Arianespace checked off 11 successful missions in 2016 and plans to launch one more in 2017 – up to seven Ariane 5 launches, three with the small Vega rocket and a pair of rather unusual Soyuz missions, taking satellites into Geostationary Transfer Orbit.

Launch Operations from French Guiana will pick up on January 28 (UTC) with the launch of the Hispasat 36W-1 satellite that will become the first Soyuz mission from the CSG to aim for a Geostationary Transfer Orbit. The satellite was initially booked to ride in the lower payload berth of an Ariane 5 but shifted to Soyuz/Fregat in the second half of 2016 – presumably due to a shortage of slots on the heavily-booked Ariane 5 rocket. The launch will max-out the Soyuz/Fregat-MT performance capability to lift the 3.2-metric ton satellite into a Geostationary Transfer Orbit.


The second of two planned Soyuz missions for this year, currently penciled in for April, will also aim for a Geostationary Transfer Orbit, carrying the SES-15 communications satellite.

Ariane 5 will open its year on February 14 on a typical dual-payload delivery to Geostationary Transfer Orbit with the Intelsat 32e (SkyBrasil-1) and Telkom-3S communications satellites. Of Ariane’s seven planned missions, six will be headed into GTO using the Ariane 5 ECA variant and one mission will be conducted by the Ariane 5 ES/Galileo version with a group of four Galileo navigation satellites, following up on last November’s first flight of the modified vehicle, capable of lifting the satellites directly into a Medium Earth Orbit over 20,000 Kilometers in altitude.

Vega will fly three missions this year – two contracted by the European Space Agency for the Sentinel-2B Earth observation satellite and the long-delayed ADM Aeolus (Atmospheric Dynamics Mission) dedicated to collecting global wind-component measurements to improve weather forecasting. The remaining Vega mission will lift into orbit the OPTSAT-3000 imaging satellite for the Italian Ministry of Defence and the VENµS satellite for the Israeli and French Space Agencies.

2016 was another record-setting year for Arianespace – pushing the upmass of the Ariane 5 rocket to over 10,700 Kilograms delivered to a Geostationary Transfer Orbit. Ariane 5 also achieved its 76th successful launch in a row since 2003, surpassing the record of 74 successful consecutive missions set by the Ariane 4 rocket. All in all, Arianespace delivered 27 payloads to orbit in 2016 with a cumulative mass of 61.4 metric tons and individual satellites ranging from 3 Kilograms to 6.5 metric tons.

The company opened 2017 with the announcement of two new launch contracts for Ariane 5 to deliver the Intelsat 39 and JCSat-17 satellites for Intelsat and Sky Perfect JSAT, two leading communications providers both with a long-standing business relationship with Arianespace.

The JCSat-17 satellite will be built by Lockheed Martin based on the popular A2100 satellite platform, hosting a hybrid C-, Ku- and S-Band payload to provide broadcast television, video distribution and mobile communications services. The satellite will feature an 18-meter unfurlable antenna supporting the S-Band payload and a flexible processor unit will permit the satellite to redirect capacity to concentrate on disaster relief efforts and other high-volume events.

Set for launch in 2019, the satellite will operate for at least 15 years, providing coverage over Eastern Asia, including Japan. To date, Arianespace has launched 19 satellites for Sky Perfect JSAT over a 25-year period; it is the 31st Japanese launch contract awarded to Arianespace.

The Intelsat 39 satellite will ride into orbit in the second half of 2018 to take up station in Geostationary Orbit to deliver video distribution and broadband networking services to Africa, Europe, the Middle East and Asia. It will replace the aging Intelsat 902 satellite at 62 degrees East in Geostationary Orbit, launched atop an Ariane 4 back in August 2001.

Intelsat 39 is being built by Space Systems/Loral in California, based on the company’s SSL-1300 platform and will weigh in at around 3,400 Kilograms, riding into orbit in Ariane’s lower payload position. The satellite will host a hybrid chemical / electric propulsion system and its payload will comprise C- and Ku-Band transponders to deliver video services and mobile connectivity.

Arianespace to date launched 58 satellites for Intelsat starting in 1983, including two Intelsat spacecraft orbited in 2016.

“With 11 successful launches in 2016 – marked by new performance, reliability and availability records set by our three launch vehicles: Ariane 5, Soyuz and Vega – we met all commitments to our customers,” Arianespace CEO Stéphane Israël said during an international press conference in Paris. “Our order book now stands at 5.2 billion euros, including slightly more than one billion euros in new orders, and we have annual revenues of approximately 1.4 billion euros, clearly reaffirming our leadership in the commercial launch services market and our commitment to making life better on Earth.”

Arianespace is also preparing to introduce the upgraded Vega C and Ariane 6 rockets to the commercial market with their maiden launches on schedule for 2019 and 2020, respectively.