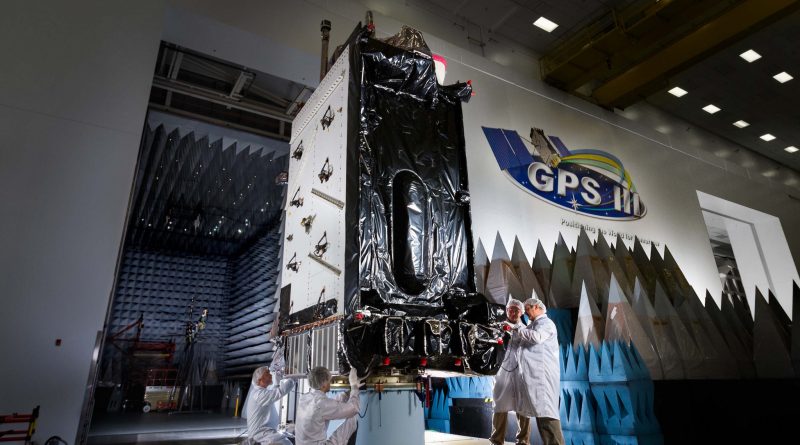 The U.S. Air Force announced this week it had awarded SpaceX a launch contract for the third GPS III satellite with a targeted launch date in February 2019, marking SpaceX’s second competitively won GPS contract and ending a decade-long monopoly held by United Launch Alliance in the military launch business.

“SpaceX will provide the Government with a total launch solution for the GPS-III satellite, which includes launch vehicle production, mission integration, and launch operations and spaceflight certification,” the Air Force said in a statement. The total contract value is $96.5 million and specifies a launch no later than April 2019.

The inauguration of the next generation of GPS satellites has slipped multiple times in recent years, initially targeting deployment to begin in 2014 but encountering significant delays due to technical challenges. GPS Block III introduces a number of new capabilities such as improved accuracy for precision navigation and timing as well as more resilient anti-jamming features as GPS represents one of the most critical space-based systems for the U.S. military and therefore could become a prime target for space warfare efforts.


The third GPS III launch contract was a direct face-off between United Launch Alliance and SpaceX. ULA received the contract for the first GPS Block III mission as part of a 28-vehicle block buy without having to compete with SpaceX. No bid was submitted by ULA for the GPS III-2 contract due to uncertainty over whether the Russian-built RD-180 engine would be restricted to fly only with non-national security payloads. ULA also cited the company did not have the accounting methods specified in the procurement documents from the Air Force.

SpaceX ended up winning the contract for GPS III-2 for a total value of $82.7 million, representing the company’s first Evolved Expendable Launch Vehicle (EELV) contract after Falcon 9 was qualified to compete for national security missions in May 2015 following a lengthy certification effort.

ULA had voiced concerns prior to the procurement of the previous launch contract that the selection is primarily driven by price, favored over other factors such as schedule certainty, reliability and past performance – points that often come up in ULA’s promotional materials and would put Atlas V with its nearly spotless record in a better position. Falcon 9’s price tag is understood to be significantly lower than the launch cost of Atlas V and Delta IV, however, ULA did not disclose its bid for the GPS III-3 contract.

The Air Force said that SpaceX offered the lowest bid in the competition for GPS III-3 while matching the technical and mission requirements of other bidders. Per the contract’s specifications, GPS satellites will ride on brand new Falcon 9 rockets and not fly re-used booster hardware as that would require additional certification work.

ULA and SpaceX are expected to compete for a number national security missions over the coming years as other launch providers do not yet have the capabilities for launching heavy-class missions. It can be expected that ULA and SpaceX will remain the only competitors for what is known as the Phase 1A launch procurement of 14 competitive launches before new vehicles such as Blue Origin’s New Glenn can enter the market to compete for Phase 2 missions starting in 2020.

SMC plans to put out a request for proposal for a total of seven missions over the coming months, all of which will be looked at on a case-by-case basis to select the launch provider that meets all technical criteria and offers the most competitive price. These missions include more GPS launches, communications satellites, the last additions to the SBIRS missile-warning system and classified National Reconnaissance Office Missions. Some missions will go beyond SpaceX’s current capabilities, requiring the company to introduce the more-powerful Falcon Heavy with a successful demonstration mission before being considered competitive for some of the high-performance missions.

The next mission up for bidding is the Space Test Program (STP) 3 launch that will involve STPSat-6 as primary payload headed to Geosynchronous Orbit to demonstrate a number of experimental payloads including detectors for nuclear detonations, an innovative laser communications system and a series of Department of Defense experiments.

Four more GPS III satellite launches will be awarded under the Phase 1A procurement strategy. At present, the first GPS III launch targets a spring 2018 liftoff atop a Delta IV rocket to be followed in May 2018 by the GPS III-2 launch on Falcon 9.