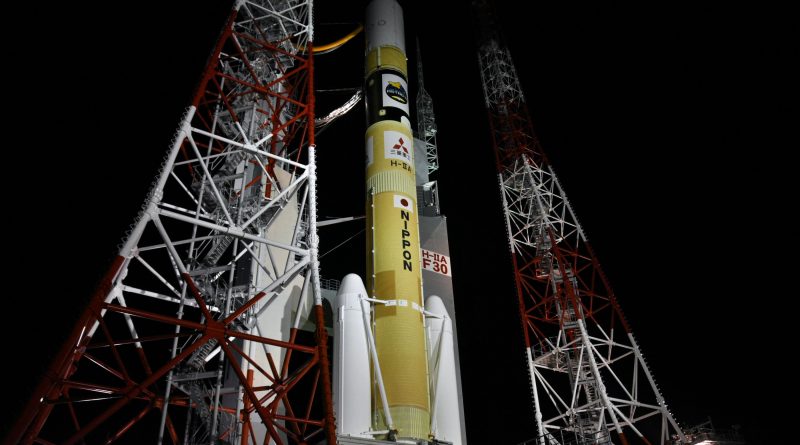 Japan’s H-IIA rocket is gearing up for liftoff on Friday from the picturesque Tanegashima Space Center on a semi-classified mission for the Japanese Defense Forces. Hidden under H-IIA’s payload fairing is the IGS Radar-5 satellite, joining a program initiated back in 1998 to give Japan independent access to satellite reconnaissance data.

Liftoff has been rescheduled to Friday at 1:20 UTC, 10:20 a.m. local time in southern Japan after the mission was shifted to the right by 24 hours due to an unfavorable weather forecast for the original launch target on Thursday.

IGS stands for Information Gathering Satellites and is Japan’s primary space-based reconnaissance program, operating high-resolution optical-imaging satellites and panchromatic radar sensors for all-weather, round-the-clock imaging. The IGS program was initiated in response to a 1998 North Korean Paektusan rocket launch that overflew the Japanese territory and it was deemed necessary to have the ability to collect reconnaissance data for early warning of imminent hostile launches in Japan’s neighborhood.

When the cabinet initiated the IGS program, Japan only had a decade of experience in the field of Earth observation and relied on foreign cooperation to obtain high-resolution reconnaissance products from U.S. satellites, coming with a fairly hefty price tag.


Because the IGS Satellites are military intelligence spacecraft, details on their design and operation are not provided. IGS spacecraft are built by Mitsubishi Electric, likely based on a commercial satellite bus. Friday’s launch will involve a high-resolution Synthetic Aperture Radar Satellite, capable of peering through clouds and collecting imagery at all times of day at a ground resolution of approximately one meter.

Under international agreements, the U.S. does not release orbital tracking data for IGS satellites, however, satellite trackers keep tabs on orbital activity of all classified satellites including the IGS birds, providing insight into their operational status.

IGS launches are treated as semi-secret missions – the identity of the satellites is announced prior to launch, however, no information is released on the satellite design, mission and status. There will be no official broadcast of the launch, but amateur groups like NVS usually provide a webcast from the launch viewing area and a confirmation of launch success will be provided through JAXA and launch vehicle operator Mitsubishi Heavy.

The first IGS mission blasted off from Tanegashima in March 2003 and placed into orbit a pair of satellites – one hosting a high-resolution imaging payload delivering black-and-white images at a ground resolution of one meter while the other satellite carried a Synthetic Aperture Radar with a resolution better than three meters. IGS-1A and B entered a formation with one following the other 490 Kilometers in altitude at 37 minutes separation, passing over North Korea every day just before noon. The second IGS pair never arrived in orbit due to a failure encountered by its H-IIA launch vehicle in November 2003.

Of the 12 IGS satellites that arrived in orbit, five have decayed and seven are in operational condition as of 2016 based on regular orbital maintenance maneuvers carried out by all satellites. No information is available on the IGS Radar-5 satellite and its capabilities, though some insight is hoped to be gleaned from its operational orbit that will be revealed by satellite trackers in the days and weeks after launch.

Called upon for the launch of IGS Radar-5 will be Japan’s H-IIA workhorse launcher, flying in its 202 configuration that employs two cryogenic rocket stages and a pair of Solid Rocket Boosters. The vehicle stands 53 meters tall, has a core diameter of four meters and weighs 285 metric tons at liftoff, capable of lifting up to 4,400 Kilograms into a Sun Synchronous Orbit.

H-IIA was rolled to the launch pad midday (UTC) on Thursday when night had already set in at the Tanegashima Space Center.

As computers are given control of the countdown, H-IIA’s Propellant Tanks will be pressurized for flight. At X-3 minutes, the launch vehicle is switched to internal power while the satellite will have been switched to battery power ahead of the final countdown sequence.

As the boosters ignite, H-IIA will jump off its pad with a total thrust of 684,500-Kilogram-force. The twin boosters deliver 78% of the total liftoff thrust as the H-IIA climbs away from its sea-side launch pad with the usual scream unique to Japan’s H-II rockets. H-IIA will make a short vertical ascent before beginning to pitch and roll in order to get aligned with its precisely planned ascent path taking the launch vehicle to the south-east for a Dogleg Maneuver.

To reach a polar orbit from its picturesque launch site located on the southern tip of Japan, H-IIA will have to make a Dogleg Maneuver, a powered turn in the ascent trajectory of a rocket.

For a direct ascent into a polar orbit, H-IIA would need to fly south-west over the Philippines. To avoid populated islands located along the direct ascent path, the Dogleg has to be inserted in order to ensure no launch vehicle debris hit populated areas, both during a nominal flight and in a launch failure.

For the Dogleg, H-IIA will fly downrange for about 100 Kilometers sticking to a south-easterly path before initiating the turn to the south-west late in the first stage burn, ensuring that all debris fall short of populated areas. A Dogleg comes at the cost of launch vehicle performance in terms of payload capability as additional fuel is required for the turn.

The two boosters burn for about 115 seconds – burnout will be sensed by the declining pressure in the combustion cambers. Booster jettison occurs after thrust tail-off as both SRBs separate simultaneously after completing their job of helping accelerate the vehicle to ~1.5 Kilometers per second.

Powered flight continues on the LE-7A engine of the first stage alone, generating 109,300 Kilograms of thrust and burning about 260 Kilograms of cryogenics per second.

Passing T+4 minutes, H-IIA will reach an altitude of over 130 Kilometers making it safe to jettison the Payload Fairing as aerodynamic forces can no longer harm the spacecraft. Separating the fairing as early as possible increases ascent performance as additional weight is lost at fairing separation.

In a nominal flight scenario, H-IIA’s first stage will burn until T+6 minutes and 36 seconds, accelerating the launch vehicle to over 5.0 Kilometers per second. Stage separation occurs eight seconds after cutoff as pyrotechnics cut the connection between stages and springs push the 37-meter long Core Stage away.

The LE-5B engine of the second stage will ignite six seconds after stage separation, delivering 13,970kgf of thrust over a burn of up to 8.5 minutes to deliver the IGS satellite to its target orbit with spacecraft separation occurring prior to T+20 minutes. The target orbit will be circular, around 500 Kilometers in altitude at an inclination of 98 degrees.