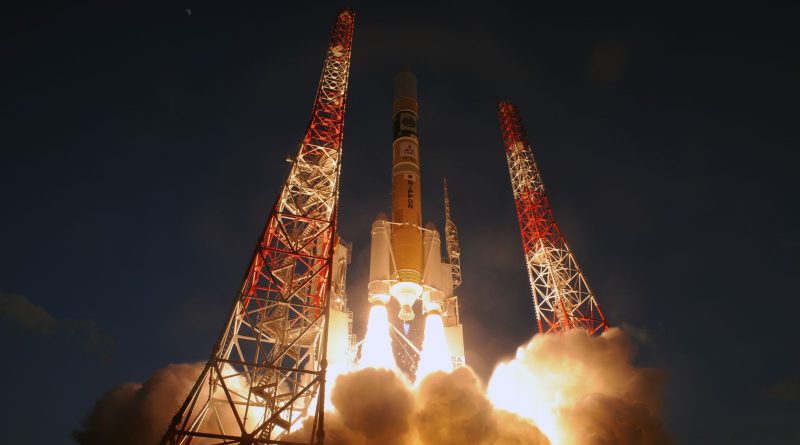 Japan successfully launched a radar reconnaissance satellite into orbit on Friday to replenish the country’s fleet of intelligence-gathering satellites primarily dedicated to advance warning of hostile missile launches in Japan’s neighborhood. The launch came amidst heightened tensions with North Korea after repeated test launches of ballistic missiles of different range with most test launches toward the Japanese territory.

The H-IIA rocket carrying the IGS Radar-5 satellite blasted off from the Tanegashima Space Center in southern Japan at 1:20 UTC on Friday, heading into an undisclosed orbit in a hush-hush mission that was not officially broadcast. Launch Vehicle Operator Mitsubishi Heavy Industries officially confirmed the successful outcome of Friday’s launch with spacecraft separation taking place around 20 minutes after liftoff into what was expected to be a ~500-Kilometer Sun Synchronous Orbit.

IGS stands for Information Gathering Satellites and is Japan’s primary space-based intelligence program to collect data over foreign territories to warn of any potential military threats in the Asia-Pacific Area. The IGS program was initiated in 1998 after North Korea launched a Paektusan rocket over the Japanese islands in an apparent attempt to place an object in orbit using a modified intermediate-range ballistic missile.

At that time, Japan purchased satellite intelligence collected by U.S. space assets, coming with a hefty price tag and relatively lengthy delivery times. To realize an independent space-based intelligence-gathering capability, Japan’s cabinet green-lighted the development of IGS in 1998. At that point, Japan only had a decade of experience in the field of Earth Observation missions, making IGS a relatively complex undertaking.


Development of the first IGS satellite generation was completed in five years and the first pair of satellites entered orbit in 2003 after launching atop an H-IIA rocket, passing over the North Korean territory just before noon, local time, when lighting conditions are favorable for imaging. IGS comprises two principal segments: high-resolution optical imaging satellites for panchromatic (black-and-white) and full color imaging, and radar satellites capable of peering through clouds and collecting imagery at all times of day.

The initial IGS generation could generate panchromatic imagery at a one-meter ground resolution, full color images at five-meter resolution and radar products at a resolution better than three meters. Over the years, IGS satellites evolved over several generations – in total, 15 IGS satellites were launched, two were lost in a 2003 launch failure, five stopped working or re-entered the atmosphere and eight appear to be in operating condition based on regular orbital maintenance maneuvers. Currently, the optical component of the constellation is in its fifth generation with a reported ground resolution of 30 centimeters for panchromatic imagery and the radar system has reached its fourth generation achieving sub-meter resolution.

Given North Korea’s continuing military demonstrations – highlighted by a recent test of four Scud-based missiles fired into the Sea of Japan – there is a desire by the Japanese government to keep continuous watch over activities at North Korea’s military sites and rocket launching stations. This requires IGS to be kept in an operational configuration with at least two optical and two radar satellites in orbit to guarantee imagery from at least one daily pass will be available even in case one or two satellites within the constellation encounter problems.

Japan treats the IGS program similar to launches of the American National Reconnaissance Office – electing not to share any details on the satellite’s missions and not providing a live broadcast of launches. The NRO’s policy is to not provide any details on the satellites they are launching, but Japanese authorities usually identify the IGS satellite type and details such as resolution typically emerge around the time of launch.

The satellite launched on Friday was identified as IGS Radar-5, the sixth IGS radar satellite to reach orbit. The satellite reportedly belongs to the fourth generation of Synthetic Aperture Radar Satellites capable of generating imagery at a 0.5-meter ground resolution. Based on previous missions, the satellite was likely aiming for an operational orbit around 510 Kilometers in altitude at an inclination near 98 degrees.

Given the secretive nature of the IGS Program, no technical details and specifications of the satellites are made public. The satellites are likely based on a commercial platform and manufactured by the country’s leading satellite builder Mitsubishi Electric.

Built and operated by Mitsubishi Heavy Industries, H-IIA flew in its 202 configuration on Friday, enlisting the help of two Solid Rocket Boosters to send the satellite into its planned Sun Synchronous Orbit, marking the 33rd launch of the H-IIA vehicle.

H-IIA is a two-stage launch vehicle with both of its stages fueled by cryogenic propellants, Liquid Oxygen and Liquid Hydrogen. Standing 53 meters tall, the rocket has a four-meter core diameter and weighs in at 285 metric tons at liftoff.

H-IIA was in the midst of a lengthy countdown operation when the sun came up over Tanegashima Island Friday morning. The rocket received 120 metric tons of Liquid Oxygen and Liquid Hydrogen propellants and went through detailed testing to prepare for its automated countdown sequence picking up four and a half minutes prior to liftoff.

The LE-7A engine was commanded to ignite at X-5.2 seconds, soaring to 86,000 Kilogram-force of thrust before the twin boosters were fired up when clock hit zero – catapulting H-IIA off the ground with a thrust of 575 metric ton-force.

The satellites operate from orbits inclined 98°, an orbital inclination that can not directly be reached from Tanegashima, requiring H-IIA to use additional performance for a Dogleg maneuver – a powered turn during the ascent inserted into the trajectory to avoid any fragments of the rocket coming down over inhabited land masses.

Heading out to the south-east, H-IIA was to continue on that path throughout the booster-phase of the flight and into the late stages of first stage flight, reaching a downrange distance of over 100 Kilometers. At that point, the vehicle was to gimbal its engine to turn westward to align itself with a south-westerly path towards a 98° orbit, avoiding the Philippines and frequented fishing areas.

Each of the twin boosters burned through 65 metric tons of propellants before thrust tailed off passing the T+100-second mark into the flight. Separation of the boosters was triggered at T+2 minutes when their chamber pressure was below a programmed threshold, falling away from the rocket after helping accelerate it to over 1.5km/s.

Main Engine Cutoff was expected around 15 minutes after liftoff in an insertion orbit at an altitude of approximately 500 Kilometers. Spacecraft separation was to occur under 20 minutes into the mission to set the IGS satellite free for its mission dedicated to keeping a close eye on developments on the ground. Real-time call-outs from the launch team indicated a nominal mission and confirmation of launch success was provided by Mitsubishi Heavy later on Friday.

No more will be heard from IGS Radar-5 as it embarks on its classified government mission. Per agreements between Japan and the U.S, no orbital tracking data of IGS satellites collected by U.S. space surveillance will be released to the public, but a worldwide network of satellite trackers will keep watch over the newly launched satellite, typically revealing its orbit within a period of days after launch.