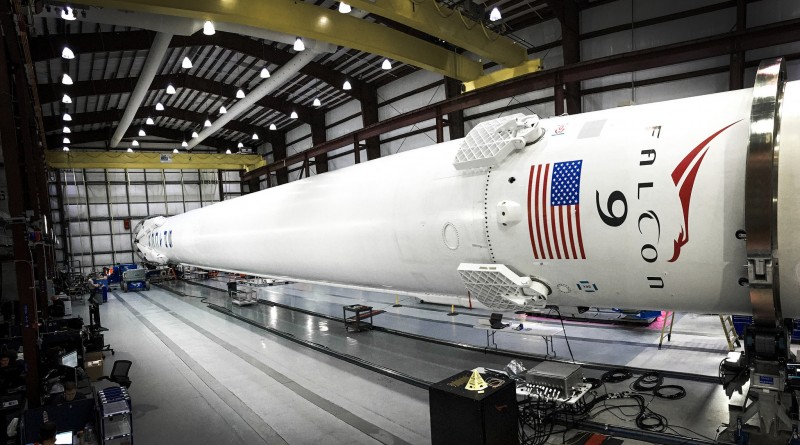 SpaceX won a $82.7 million contract from the United States Air Force for the launch of the GPS 3-2 navigation satellite atop the company’s Falcon 9 rocket in May 2018 – marking the first contract awarded to SpaceX for the launch of a high-profile military payload and ending a decade-long monopoly held by United Launch Alliance in the military launch business.

Wednesday’s announcement made by the Air Force came just hours after SpaceX unveiled the company’s ambitious Red Dragon mission, aiming to send an unpiloted Dragon 2 spacecraft to Mars as early as 2018 as a pathfinder for the development of landing systems for heavy payloads, directly supporting SpaceX’s and NASA’s crewed Mars exploration projects.

The award of the GPS 3-2 launch contract to SpaceX did not come as a surprise since the California-based company was the only bidder on the contract after the only other qualified launch provider, United Launch Alliance, decided to sit out.

ULA’s Atlas and Delta rockets split the military launch business over the past decade as the company was the only one capable of launching heavy satellites and qualified under the Evolved Expendable Launch Vehicle (EELV) program. SpaceX had been fighting to get an EELV qualification for the Falcon 9 launcher, though frequent design changes on the vehicle complicated the process. The GPS 3-2 contract is SpaceX’s first under the EELV Program.


ULA declined to bid for this particular launch because the company did not expect to have an Atlas V rocket available for the mission due to congressional restrictions in the use of the Russian-built RD-180 engine for national security payloads. ULA also noted it had not yet have the accounting methods specified in the Air Force procurement documents issued back in September.

The ban on the use of RD-180 in military missions was lifted in December and ULA expects to be able to bid on future contracts for GPS and other programs.

Another factor brought up by ULA was a concern associated with the Air Force’s procurement methods outlined for the GPS 3 contracts, favoring launch vehicle price over other factors like schedule certainty, reliability and past performance – attributes that would benefit the Atlas V rocket and often come up in ULA’s promotional materials.

In 2012, SpaceX provided an unsolicited bid for a GPS 3 mission at $80 million to gain a foothold in the national security launch market, but the company’s Falcon 9 rocket had not been certified for EELV launches at the time and the offer was rejected. EELV qualification was finally completed in May 2015, allowing SpaceX to compete for national security launches.

The GPS 3-2 mission is the first of nine medium-class launches of the Air Force that will be put out for bid by the end of 2018. Six of these launches are for GPS 3 satellites and will likely see an open competition between United Launch Alliance and SpaceX. The next mission to be up for bidding will be GPS 3-3 later this spring.

The first GPS 3 satellite is currently set for launch in May 2017 aboard ULA’s Delta IV rocket, a contract awarded as part of a block-buy of 28 ULA launch vehicles.

For SpaceX, the selection for the GPS 3-2 mission marks a major success, having entered the running when it comes to high-priority military launches. This mission provides the company with a welcome opportunity to demonstrate it can match ULA’s capabilities in launching medium-class military payloads at a considerably smaller price, further cementing its position on the U.S. launch market.