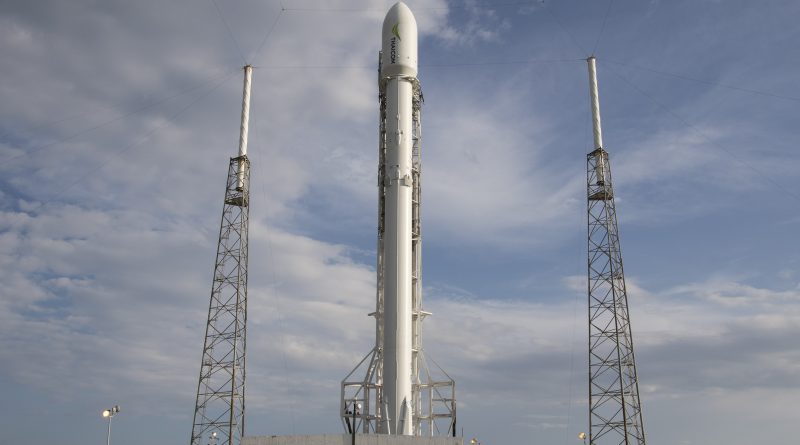 The SpaceX Falcon 9 rocket is counting down to liftoff from Florida on Thursday on its next high-energy satellite delivery to Geostationary Transfer Orbit. Cleared by a clean Launch Readiness Review, Falcon 9 is aiming for liftoff during a two-hour window opening at 21:40 UTC, 5:40 p.m. local time.

Thursday’s launch is coming just 20 days after SpaceX’s most recent mission that lifted JCSat-14 to Geostationary Transfer Orbit and achieved the first successful Drone Ship landing of the Falcon 9 first stage after a high-energy re-entry. Shortly after this launch, the next Falcon 9 completed assembly and received its payload. F9 sailed through its Static Fire Test Tuesday night and in-depth reviews of data gathered during the brief ignition of the nine Merlin 1D engines showed no problems.

SpaceX conducted the Launch Readiness Review early on Thursday, identifying no outstanding issues and clearing Falcon 9 to head into countdown operations. This is the 25th launch of the Falcon 9 rocket, the fifth using the Falcon 9 Full Thrust version with increased performance through propellant densification and uprated Merlin 1D engines operating at higher thrust.

Thaicom 8 has a mass of 3,100 Kilograms and sports an all Ku-Band payload of 24 active transponders feeding three coverage zones. Stationed at 78.5°E in Geostationary Obit, the satellite will operate for at least 15 years to deliver services to eastern Africa, India and surrounding territories, and Thailand.

Pressing into countdown operations, the SpaceX launch team will put the Falcon 9 through initial power-up followed by a multi-hour checkout of all subsystems of the rocket. Reconfigurations for propellant loading will begin when personnel departs Space Launch Complex 40.

The Eastern Range Countdown picks up at T-4 hours and Falcon 9 will prepare for propellant loading for which a decision will be made via a poll of the launch team at T-38 minutes.

The Automated Countdown Sequence picks up at T-35 minutes with the final chilldown of tanks. Rocket Propellant 1 will start flowing into the two-stage rocket prior to the start of Liquid Oxygen loading which has been set up to finish as close to T-0 as possible – preventing the sub-cooled oxidizer from warming up, thus ensuring the tanks are at flight mass when clocks hit zero.

In less than half an hour, Falcon 9 will receive over 500 metric tons of Liquid Oxygen at -207°C and Kerosene chilled to -7°C.

Checking off the final critical countdown events in the last ten minutes, Falcon 9 will chill down its nine Merlin 1D engines, switch to internal power, arm its Flight Termination System and pressurize its tanks. Standing on its own after the retraction of the Strongback, the 70-meter tall Falcon 9 will fire up its engines at T-3 seconds to throttle up to a collective liftoff thrust of 694 metric ton force.

Rising from its launch pad under the loud thunder of its engines, Falcon 9 is set for a 32-minute ascent mission to Supersynchronous Transfer Orbit characterized by a particularly high apogee well over Geostationary Altitude. No target orbit parameters have been released by SpaceX, though it can be expected that Falcon 9 will be aiming for an apogee altitude around 80,000 to 90,000 Kilometers.

Falcon 9 will use the standard route to GTO from its Florida launch pad, pitching over and rolling onto a east-south-easterly trajectory, heading towards the equator. Powering uphill, Falcon 9 will break the sound barrier about 70 seconds into the flight and encounter Maximum Dynamic Pressure around 77 seconds after liftoff, throttling down its engines for approximately 20 seconds around MaxQ.

The first stage will be in action for two minutes and 35 seconds with MECO coming three seconds earlier than on the F9-024/JCSat-14 mission, thus saving around 7,400 Kilograms of additional propellant for the return journey.

Separating from the second stage four seconds after MECO, the Falcon 9 booster will embark on its next high-energy return – though those precious 7.4 metric tons of fuel will come in handy. The JCSat-14 mission saw the first stage re-entering the atmosphere at a speed of around Mach 5 given that particular flight’s tight margins only allowed for a minimal re-entry burn to slow the stage down prior to slamming into the atmosphere.

Successfully finding its way back to the Autonomous Spaceport Drone Ship, the F9-024 booster appeared visibly scarred and engineering analysis quickly showed that this stage could not be easily re-used and would require significant refurbishment. Currently in storage at Launch Complex 39A, the F9-024 vehicle is set for a journey to SpaceX’s McGregor site to complete component testing and static fire tests.

Immediately after separation from the second stage, the booster will use its cold gas thrusters to flip around, pointing its engine section forward. A propellant settling maneuver will be made to ensure no gas bubbles enter the engines when re-igniting for the Re-Entry Burn. No braking/boost back burn will be made with the booster traveling on a ballistic arc until re-entry, creating a downrange travel distance of 680 Kilometers.

Having saved propellant with MECO three seconds earlier than the previous flight, the booster will be able to extend the Re-Entry Burn by up to nine seconds.

Compared to JCSat-14, the re-entry speed will be lower by around Mach 1.2. Kinetic energy increases as a square of the velocity, and peak heating as a cube of velocity – so a reduction of speed around one Mach number makes a tremendous difference in the heating experienced by the first stage.

Blazing through the atmosphere, Falcon 9 will use its four actuated grid fins to guide itself back to the Autonomous Spaceport Drone Ship that left port on Saturday to head to the landing zone.

Although re-entry will be a bit more manageable, the landing maneuver executed in Thursday’s mission will most likely feature the more aggressive design with three engines firing for around five seconds to rapidly slow the stage followed by the shutdown of the outer engines and the final descent powered by the center engine alone.

Deploying its landing legs with seconds to spare, the first stage will hopefully master another bulls-eye landing eight and a half minutes after blasting off, aiming to increase SpaceX’s inventory of returned boosters to four.

The primary objective of Thursday’s mission is the safe delivery of Thaicom 8, riding into a highly elliptical orbit atop the second stage of Falcon 9 which will be tasked with a pair of MVac engine burns – the first six minutes and ten seconds in duration to boost the stack to a slightly elliptical parking orbit, and the second coming after a coast phase of 18 minutes and lasting 73 seconds to lift the apogee of the orbit.

Thaicom 8 will be separated 31 minutes and 56 seconds after launch, heading off on its mission that starts with a multi-day transfer into Geostationary Orbit for a checkout phase before entering operations as part of Thaicom’s satellite fleet.