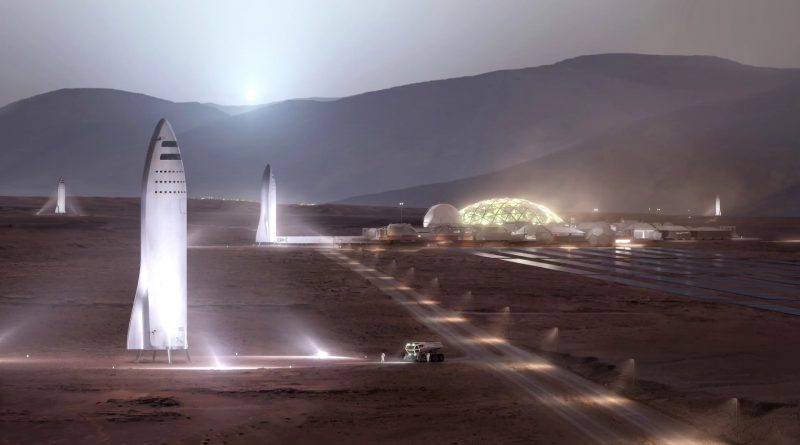 SpaceX CEO and Lead Designer Elon Musk provided on update on the company’s proposed Interplanetary Transport System (ITS) and BFR Rocket on Friday, discussing a number of changes to the original ITS concept presented in 2016, notably a significant downsizing of the booster and spacecraft to enable a spinoff variant viable for commercial missions in Earth orbit to drive in revenue for the realization of ambitious projects like Moon Base Alpha and building a city on Mars.

Musk outlined a bold vision at 2016’s International Astronautical Congress, presenting a concept for a 122-meter tall ITS Booster and Interplanetary Spaceship combination capable of opening up the Solar System for human and robotic exploration so far only envisioned in science fiction. In the year that passed, significant progress was made on the drawing board and in simulations for the ITS/BFR concept and initial hardware entered testing as Musk is pushing for an earliest in-service date of the revised vehicle design around 2022.


In his 2016 address, Musk noted he founded SpaceX with a core motivation of bringing humans to Mars and making mankind a multi-planetary species.

Since its formation in 2002, SpaceX made great strides with its Falcon rocket fleet, initially establishing the capability of reaching orbit with Falcon 1, pushing the capabilities of the Falcon 9 rocket from initial Low Earth Orbit flights to operational Geotransfer missions and introducing partial launch vehicle re-usability via 16 successful booster landings and a pair of first stages that have already made two trips to space and back.

These tools were considered essential before SpaceX could move on to bigger things, specifically a path toward sending colonists to Mars and furthering humankind’s drive to go beyond what was already explored.


Pushing toward the BFR, or Big Falcon Rocket, SpaceX developed an advanced liquid-fueled engine named Raptor, aiming to achieve the highest thrust-to-weight ratio to date in a liquid-fueled engine through a full-flow staged combustion design using a sub-cooled combination of methane and liquid oxygen as propellant. A scaled version of the initially envisioned Raptor reached the test stand in time for Musk’s 2016 presentation, completing initial start-up testing.

Since then, Raptor completed 42 engine tests in Texas accumulating 1,200 seconds of burn time at engine pressures of up to 200 atmospheres. Similar to SpaceX’s Merlin engine, Raptor is expected to undergo upgrades in the future to reach an operating pressure of 250 bar by the time BFR Version 1 reaches the launch pad and eventually step up to 300 bar for subsequent iterations of the vehicle.

Another hardware item presented in 2016 was a large test article for the Spaceship’s Liquid Oxygen tank, using a composite structure designed to hold 1,200 tons of sub-cooled LOX. The tank was taken out to sea on a barge for initial cryogenic and pressure testing, failing spectacularly just above its design pressure and delivering valuable data on where the new carbon-fiber composite technology needs improvement for realizing the tank sizes and robustness needed by the BFR.

The big ITS reveal in 2016 came without concrete plans to raise the $10 billion it would require for the project to reach an operational service capability. Much of the year since was spent working out ways to commercialize the concept to generate revenue for the ambitious Mars plan which prompted major modifications to the original vehicle design to enable a spin-off for commercial missions in the Earth orbit regime and potentially point-to-point transportation on Earth.


The revised design presented on Friday calls for a 106-meter tall Booster and Spaceship combination, scaling back its diameter from twelve to nine meters and reducing the number of first stage engines to 31, also stepping back from the full-thrust Raptor version and opting for the 250-bar version. This gives the 4,400-ton rocket a launch thrust of 52.7 Meganewtons, or 5,375 metric-ton-force compared to the original ITS version with 42 full-thrust Raptors with a launch thrust of 127.8 MN.

The new design for the Spaceship specifies a length of 48 meters and a body diameter of nine meters, weighing in at 85 metric tons and carrying up to 1,100 metric tons of propellant and an ascent payload of 150 t. Compared to the 2016 design, the Spaceship lost some 65 t in dry mass, its body diameter was reduced and its length shortened by 1.5 m – resulting in a reduction of launch mass by a factor of almost two but retaining its capability to carry a crew of up to 100 to Mars.

Musk emphasized the presence of a delta-wing on the vehicle for pitch angle control in a wide range of payload configurations and atmospheric densities, essentially allowing it to land anywhere in the solar system. In a crew configuration, the Spaceship would host 40 cabins and large common areas as well as storage space and a solar storm shelter – all facilitated in a pressurized volume of 825 cubic meters, larger than the cabin of an A380 aircraft.

In the aft section of the Spaceship are the large tanks needed to hold 240 tons of methane and 860 tons of LOX, fed to four vacuum-optimized Raptor engines and two sea-level Raptors to allow the craft to optimally perform in Earth orbit and interplanetary space and when landing in relatively dense atmospheres.

Retained from the 2016 design is the capability of refueling the Spaceship in Earth Orbit to enable it to depart Earth with full tanks in order to reach the surface of another body in the solar system. According to Elon Musk, lunar surface missions using the current Spaceship design would be possible with a single propellant load for both the landing on the Moon and the propulsive return & landing on Earth. A Mars mission would require the production of methane and LOX using water and carbon dioxide abundantly available on the planet and in its atmosphere.

For commercialization of the BFR, Elon Musk proposed two routes, one in the area of space transportation and the other for Earth-bound transportation taking a route via space. BFR can lift 150 metric tons into Earth orbit in its fully reusable configuration at a smaller cost than any current commercial launch vehicle given its re-use capability over hundreds or even thousands of missions.

The size of the proposed payload bay for the Spaceship will enable the launch of space objects as large as nine meters in diameter and over 20 meters in length.

This makes the vehicle suitable for multi-payload deliveries of the largest satellites currently in operation as well as the deployment of the huge communications satellite constellations of the future or yet-to-be-envisioned space telescopes of unprecedented size. Elon Musk also presented an illustration of the vehicle docked to the International Space Station to showcase it could play a critical role in cargo deliveries in Earth orbit and beyond. Satellite servicing, collecting space debris and returning large payloads from orbit will also be part of BFR’s repertoire once reaching an operational stage.

Another branch of BFR’s future business could be in point-to-point transportation on Earth for humans and cargo.

A promotional video released by SpaceX presents BFR as a way of connecting major transportation hubs on Earth within an hour via sea-based launch pads placed near large cities. Passengers would travel at 27,000 Kilometers per hour, starting with a propulsive boost on the BFR first stage that would then return to its starting point for refueling while the Spaceship finishes the acceleration phase followed by a turbulence-free flight outside the atmosphere, re-entry & aerodynamic braking ahead of a propulsive landing on the destination barge where passengers would disembark and the Spaceship would be loaded onto another first stage to be ready for the next departure.

In a post after his presentation, Elon Musk stated the “cost per seat should be about the same as full fare economy in an aircraft.”

Concerning the time table for BFR’s rollout, Elon Musk lined out an ‘aspirational’ schedule with two cargo missions to Mars launching in the 2022 window to demonstrate the spacecraft’s landing capability, locate water resources and stockpile supplies and hardware on Mars for future crew missions. The 2024 window would then see two cargo ships with more equipment launch to Mars and a pair of crewed missions for a surface expedition tasked with the build-up of the base to establish a propellant production plant on Mars.

Although the dates can be considered notional at best, Musk stated production of the first Spaceship would begin around the second quarter of 2018. Eventually, he said, production at SpaceX would fully switch from the current Falcon 9, Falcon Heavy and Dragon vehicles to BFR once a sufficient inventory of re-usable first stages has been built to continue offering Falcon launch services until the new vehicle is in operation. He did not mention whether second stages would continue to be produced, stockpiled or made reusable as well.

While the new concept for the BFR is more realistic than the 2016 design stage, a lot has to fall into place for it to become reality at the pace desired by Elon Musk. SpaceX has yet to debut the Falcon 9 Block 5 version and demonstrate its re-use over numerous mission cycles to achieve the company’s goal of significantly cutting the costs of launching payloads to space.

Falcon Heavy is also still sitting on the ground after turning out to be a much more complex undertaking than ‘simply strapping three Falcon 9 cores together’ – a perfect illustrator for unforeseen hold-ups and challenges that naturally come with highly ambitious projects aspiring to reach new heights.