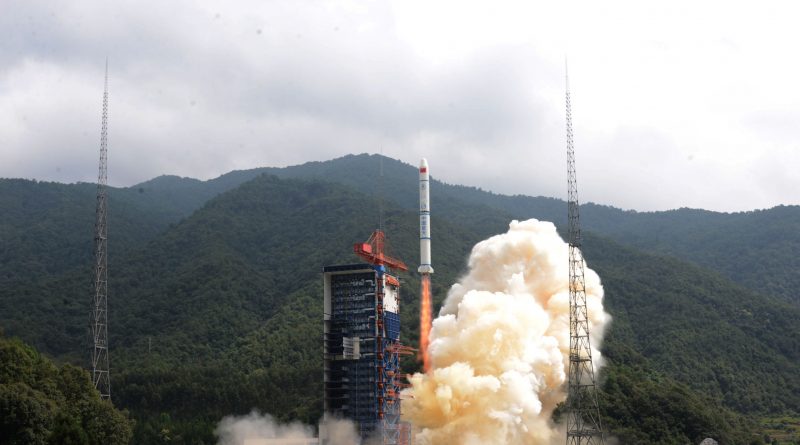 China conducted a secretive launch from the Xichang Satellite Launch Center on Friday, involving a Long March 2C rocket deploying a trio of satellites into orbit under the designation Yaogan-30 Group 01. Friday’s launch marked China’s Return to Flight after the July 2nd failure of the Long March 5 rocket and likely opens a busy end-of-year salvo that has been observed with the Chinese space program for a number of recent years.

Long March 2C lifted off from LC-3 at Xichang, Sichuan Province at 4:21 UTC and airspace closures showed the rocket would fly south east across the Chinese mainland, then head out over the Pacific Ocean just south of Taiwan – indicating an initial orbital inclination around 35-40 degrees. Confirmation of a successful launch came within one hour of liftoff and was accompanied by the disclosure that the mission lifted a trio of satellites into orbit, identified as Yaogan-30 Group 01 or YG-30 (01). According to the official launch announcement, the satellites will be tasked with “electromagnetic detection and related technical tests.”


The Yaogan-30 (01) designation is somewhat confusing since a satellite named Yaogan-30 launched from the Jiuquan Satellite Launch Center on May 15, 2016 using a Long March 2D rocket. Yaogan is the designation for China’s low-orbiting reconnaissance satellites inaugurated back in 2006 and including a variety of military-operated spacecraft such as optical reconnaissance, radar and electronic intelligence satellites.

Yaogan triplet launches are nothing new but were never identified as such by the Chinese. The initial Yaogan trio was launched in 2010 and was followed by four more through 2014, closely resembling the formation-flying Naval Ocean Surveillance System operated by the U.S. from the 1970s to the turn of the century when the system switched to formation-flying pairs. The Yaogan-30 mission launched last year is believed to be an optical reconnaissance satellite based on its launch vehicle and operational orbit, likely in no relation to the satellites lofted on Friday.


According to the official launch announcement, the Yaogan-30 (01) satellites were developed by the Chinese Academy of Sciences to create a multi-satellite system for electromagnetic environment detection which could be interpreted as a science-driven mission, though intelligence-gathering in the electromagnetic spectrum could also fall within the realm. Even if operating from a lower inclination than the typical Yaogan trios, the satellites could still cover the majority of Earth’s marine traffic routes, if ship-tracking and characterization is indeed their role.

Orbital data for the Yaogan-30 Group 1 released by the Joint Space Operations Center shows them grouped together in an orbit of 593 by 601 Kilometers at the expected inclination of 35 degrees, based on the launch azimuth. The CZ-2C upper stage ended up in an orbit of 583 by 678 Kilometers at the same inclination. It now remains to be seen whether they enter a precisely maintained formation, in line with an ELINT mission, or whether they spread out to collect electromagnetic data from different locations of the ionosphere.

The launch of YG-30 (01) was China’s first orbital mission in 89 days after the country’s space plans for 2017, up to now, were hindered by three in-flight anomalies.

In late December 2016, a Long March 2D suffered a problem when carrying a pair of sharply-eyed SuperView Earth-imaging satellites, causing the Long March 2 and 4 families to be grounded for nearly half a year due to commonality between the two launch vehicle types. The two SuperView satellites reached a lower-than-planned orbit and had to make a series of maneuvers to rectify their orbits and reach their operational altitude at 530 Kilometers.

On June 18, China’s Long March 3B heavy-lift workhorse had a partial failure when its third stage ran into attitude control issues and deployed the Zhongxing-9A communications satellite into an orbit that was some 20,000 Kilometers short of the intended Geostationary Transfer Orbit. Like the SuperView twins, the satellite managed to climb into its operational Geostationary Orbit, though at the expense of additional fuel that will eventually shorten its service life.


The high-profile failure of China’s new heavy lift rocket on July 2 was the most severe blow to the country’s space program. Blasting off with the experimental Shijian-18 satellite, Long March 5 embarked on its second test flight after a successful inaugural mission in 2016 with Shijian-17, despite a slight performance hit on the rocket’s second stage that had to be compensated by the YZ-2 upper stage.

On the July 2 mission, trouble struck earlier in the flight when the rocket’s cryogenic core stage suffered an engine-related problem some 347 seconds into the flight, causing the rocket to fall short of orbit.

Chinese officials said earlier this week that the investigation into the exact failure mechanism is hoped to conclude by the end of the year at which point corrective measures and a forward plan for Long March 5 can be worked out. Pending a successful second test flight, the launcher was to be cleared for high-profile missions, notably the Chang’e 5 lunar sample return mission in late 2017 and the launch of the Tianhe Core Module of the Chinese Space Station in early 2019. As a result of the failure, Chang’e 5 will be delayed – possibly until 2019 – and China is likely to conduct additional test missions with relatively inexpensive satellites before placing high-profile payloads on the CZ-5 vehicle.

Despite setbacks on the launch vehicle front, China was able to celebrate a major success in 2017 with the flawless execution of the Tianzhou-1 cargo mission to the Tiangong-2 space laboratory that demonstrated the country’s orbital cargo architecture in preparation for the deployment of the Chinese Space Station.

In action on Friday was the Long March 2C rocket, conducting its 42nd mission and the first since November 2014. A member of the Long March family, the 2C vehicle was derived from the DF-5 ballistic missile and first flew back in 1982, keeping a solid record with only one previous failure.