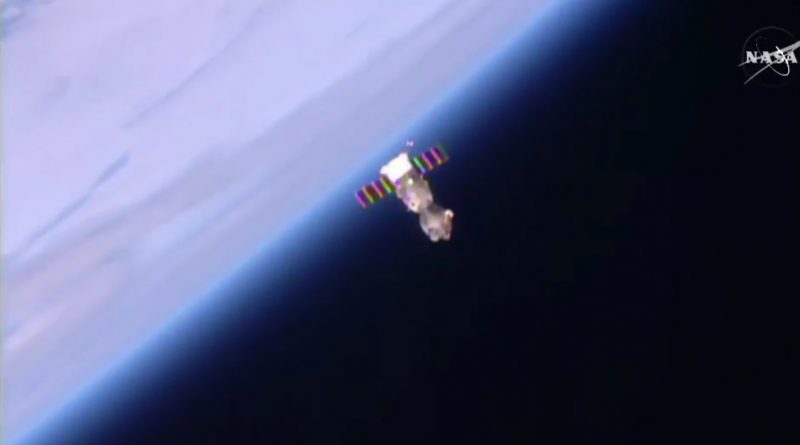 Three spacemen swapped the relative comforts of the International Space Station for their confined Soyuz capsule to parachute back to Earth Saturday morning, aiming for a landing in the Kazakh steppe.

Strapped into the ‘cozy’ Entry Module of the Soyuz are commander Yuri Malenchenko, one of the most experienced space fliers in history making his fifth Soyuz landing, NASA’s Tim Kopra, returning from his second long-duration stint on ISS, and the UK’s Major Tim Peake, the first British national to visit the International Space Station in a widely watched mission.

The Soyuz TMA-19M spacecraft pushed off from its Rassvet docking port at 05:52 UTC and fired its engines twice to move away from the International Space Station, opening a 12-Kilometer gap before re-lighting its main engine for the deorbit burn. Hitting the brakes at 8:22 UTC, Soyuz will set itself on a course taking it into the dense layers of the atmosphere for a blazing re-entry. Emerging from the plasma of re-entry, Soyuz will open its parachutes and touch down at 9:14 UTC, cushioned by the firing of its soft landing engines.


Set for an afternoon landing, Soyuz TMA-19M and its three crew members will have spent 185 days and 22 hours in orbit.

With five previous missions aboard the Space Shuttle, Soyuz and the Mir and ISS Space Stations, Yuri Malenchenko logged 827 days in space and will rank second on the all-time list for career time spent in space. Only Cosmonaut Gennady Padalka spent more time off the planet.

Tim Kopra will raise his record to 244 days having spent two months on ISS as part of Expedition 20. Tim Peake returns from his first mission to space.

Wrapping up their half-year stay aboard the Space Station, the three crew members began preparing for their return several weeks ago – packing the Soyuz with trash and return cargo, putting the spacecraft through a series of tests and simulating their descent in normal and emergency scenarios. They also put on their Sokol suits for a fit and leak check and adjusted their Kazbek couches to make sure their seats were ready to help absorb some of the shock at landing.

The three home-bound crew members and their colleagues who will stay in orbit until September gathered inside the Kibo Module Friday morning to participate in the Change of Command Ceremony. Tim Kopra handed the reign over to Jeff Williams who will lead Expedition 48, officially starting at the moment Soyuz departed the Station.

After a rest period and a last joint meal, the crew headed into preparations for undocking, powering up the Soyuz, checking communications with Mission Control Moscow and updating their flight parameters based on the latest trajectory computations.

In Kazakhstan, a 300-strong recovery team mobilized in the pre-dawn hours, deploying to staging sites in off-road and All Terrain Vehicles to be in position at the landing site 148km south east of the town of Dzhezkazgan. Helicopters and fixed-wing aircraft were pre-staged to Karaganda for takeoff around the time Soyuz fires its engines to drop out of orbit.

The recovery team includes members from all involved agencies, first and foremost RSC Energia personnel and Rosaviatsiya specialists who are trained in locating and recovering crews in adverse weather conditions and even in the dead of night. However, Saturday’s landing is looking at a favorable weather forecast, making their job easy.

Also part of the recovery team are members from NASA, ESA and Roscosmos to attend to their respective crew members after landing.

The recovery team includes 12 MI-8 helicopters and two fixed-wing aircraft that are circling over the landing area to act as command centers, also in charge of communicating with the Soyuz during the descent under the parachute.

The three returning crew members bid farewell to their colleagues and their home in space before floating into their Soyuz spacecraft. Waving good-bye, the crew closed and locked the Orbital Module’s hatch at 2:34 UTC. A minute later, Oleg Skripochka closed the hatch of the Rassvet module, clearing the way for leak checks to commence.

The Soyuz interface leak check was completed by venting pressure from the small and large vestibule areas between the spacecraft and the Rassvet module. After stabilization of pressures, the crew provided pressure readings to the ground every five minutes, showing stable pressures in the vestibule areas which confirmed that both hatches were holding pressure.

Using the leak-check period, the crew put on their Kentavr Anti-G garments and Sokol Launch and Entry Suits. They also closed out the Orbital Module, powering off equipment any tying down hardware before moving down into the Entry Module. Commander Yuri Malenchenko took the center seat, flanked to his right by Tim Peake and his left by Tim Kopra, both gearing up for their first return aboard Soyuz.

With the hatch of the Entry Module closed, the crew went through leak checks on their suits to make sure the Sokols can protect them in the unlikely event of a pressure loss on the way back to Earth. Pressure on the Orbital Module was reduced for a check of the internal hatch of the Soyuz which also showed good results.

The Soyuz switched to autonomous power and umbilicals within the docking interface were demated to allow hooks on Rassvet to be opened so that Soyuz was only held in place by its own hooks with power-up of the docking mechanism occurring five minutes prior to separation.

The undocking command was issued 90 seconds ahead of separation, marking the start of hooks driving open to break the hard-mate between ISS and Soyuz.

Physical Separation was confirmed at 05:52:30 UTC when four loaded spring assemblies pushed Soyuz and ISS apart with a force of 300 Kilograms, creating an initial opening rate of 0.12 meters per second.

The vehicle drifted passively for three minutes before re-enabling its thrusters and conducing an eight-second DPO firing to increase its opening rate along the R-Bar. This burn increased the vehicle’s opening rate along the R-Bar by 0.6m/s and was quickly followed by a roll maneuver, executed by Soyuz to properly position its thrusters for the second burn. The second departure burn, four minutes and 20 seconds after separation, lasted 30 seconds and delivered a thrust component along the velocity vector.

With Soyuz on a good departure path on the velocity vector, the crew completed a few reconfiguration steps before settling in for one and a half orbits of free flight leading up to the deorbit burn.

Ignition of the SKD main propulsion system is expected at 8:22:07 UTC on a burn of four minutes and 37 seconds to slow the spacecraft down by 128 meters per second to place it on a path to re-entry. The deorbit burn has to be performed with great accuracy to put the Soyuz on a path to intercept the dense atmosphere within a narrow corridor, en-route to the planned landing site south-central Kazakhstan.

Separation of the modules is expected to occur at 8:49:11 UTC when Soyuz is 140 Kilometers in altitude, approaching the dense layers of the atmosphere. Firing a series of pyros in close succession, the Orbital and Service Modules will be pushed away from the Entry Modules into different directions with specific velocities to ensure no re-contact would occur between the modules.

Soyuz will dip below 100 Kilometers, marking the start of Entry Interface, expected at 8:52:01 UTC at a speed of 7.6 Kilometers per second. For the first 89 seconds of re-entry, the Soyuz will stick to its initial re-entry attitude before enabling Entry Guidance that will put the Soyuz through a series of bank maneuvers and modify its lift to home in on its planned landing site located 148 Kilometers south east of the town of Dzhezkazgan.

Split seconds before touchdown, the Soyuz will fire its solid-fueled soft landing engines to cushion the impact. Touchdown is expected at 9:14 UTC on Saturday in the southern landing zone of the Soyuz where a 300-person recovery team will be standing by in helicopters, all-terrain vehicles and off-road vehicles to begin rushing to the landed Soyuz craft. Being helped out of their spacecraft, the three crew members will be greeted by sunny skies, marking the end of a busy space mission.