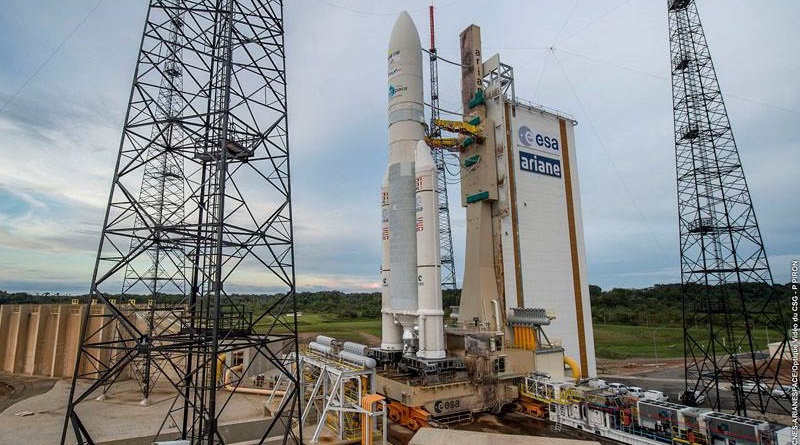 Arianespace had to scrub Friday’s planned Ariane 5 launch with a pair of heavy communications satellites due to unfavorable Upper Level Winds. Pending progression of winds aloft, Ariane 5 will try again on Saturday during a 70-minute window opening at 20:30 UTC.

The VA230 so far had a bumpy path to liftoff with two-technical launch delays and this latest weather-related issue not permitting the launch of the EchoStar 18 and BRIsat satellites.

Liftoff had been scheduled for June 8 but had to be postponed the day before when a fluid umbilical between the Mobile Launch Table and the rocket’s second stage was found in a faulty condition. This component was replaced and teams were hoping to roll the vehicle to the launch pad on Wednesday, however, another umbilical issue again required a component replacement, leading to a further 24-hour delay.

Finally arriving at the ELA-3 launch complex on Thursday, Ariane 5 was ready to head into its lengthy countdown operation. No issues were encountered on Friday and the rocket stood fully fueled atop its pad when high altitude winds strengthened beyond the launcher’s limits.

Upper Level Winds are a structural dynamics issue and have to be considered when plotting the vehicle’s ascent profile. Strong shear during dynamic flight events can nudge the vehicle off its flight path or even cause structural failures, therefore close attention is paid to wind conditions in the upper atmosphere and several weather balloons are released in the hours leading up to launch.

Teams will continue to monitor the atmosphere over the Guiana Space Center through soundings and balloon data to assess whether a launch attempt on Saturday will be possible.