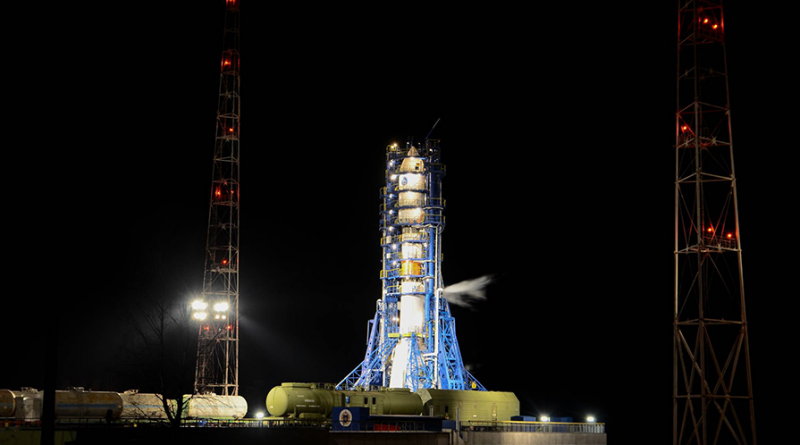 Russia’s Soyuz rocket is set to conduct its year-opening launch Saturday night from the Plesetsk Cosmodrome, carrying a Glonass-M navigation satellite into orbit. According to Roscosmos, the launch is planned for 0:21 UTC on Sunday, however, no details on processing milestones were released in the run-up to the planned launch date.

If launching on time, Soyuz 2-1B will fly a standard ascent mission lasting nine and a half minutes followed by three burns of the Fregat Upper Stage to set up for the release of the satellite three and a half hours after liftoff into an orbit just over 19,000 Kilometers in altitude.

If going ahead with the planned launch, Russia would become the third country to place a navigation satellite in orbit this week following Monday’s launch of a Chinese Long March 3C with the Beidou-M3-S satellite and Friday’s Atlas V mission that delivered the final Block IIF satellite to orbit as part of the Global Positioning System.


This mission is the year-opener for the Russian Soyuz workhorse with close to 20 missions planned in 2016 across the Soyuz family, including four crewed Soyuz flights to the Space Station, three Progress cargo missions, and at least one flight from Russia’s new Vostochniy Cosmodrome, plus a pair of launches from French Guiana under European supervision. If Soyuz continues its reliability record and flies out its planned manifest, it will again stand at the top of the world’s space launchers in terms of the number of flights performed this calendar year.

Russia’s Glonass Navigation Satellite System saw its most recent launch in November 2014 when an advanced Glonass-K1 satellite was launched by a Soyuz rocket. The previous Glonass-M launch took place in June 2014.

The recent gap in launches is due to a shift of the Glonass program to a launch-on-need architecture as a cost-saving measure – keeping the satellite constellation operational by replenishing satellites when close to the end of their lives instead of launching satellites on a fixed schedule and ending up with more satellites in orbit than actually needed.

With a design similar to the U.S. Global Positioning System, Glonass requires 24 active spacecraft in three orbital planes with at least one spare per plane to ensure a continuity of service in the event of a problem with one spacecraft. The Glonass constellation was pushed close to its limits in recent years as two Proton launches of Glonass triplets ended in failure in 2010 and 2013. Another triplet launch atop Proton is tentatively scheduled for later in 2016.

According to current status information, Plane 1 of the Glonass constellation is occupied by eight active spacecraft launched between 2009 and 2013, Plane 2 also hosts eight active spacecraft launched between 2006 and 2010 plus the first Glonass-K1 satellite shown to be in Flight Testing operations. Plane 3 of the Glonass constellation is currently understaffed, only with seven active spacecraft and three satellites shown to be in maintenance mode two of which are no longer transmitting. It is not officially announced ahead of launch which plane is being targeted by Glonass-M No. 51.

The 1,500-Kilogram Glonass-M satellites have a design life of 7 years which is significantly higher than that of the previous generation of satellites. Each M satellite is about 2.4 by 3.7 meters in size with a solar array span of 7.2 meters. 12 L-Band antennas are mounted on the satellite along with laser corner-tube reflectors that are used for ranging in order to determine the orbit of the vehicles. The heart of the satellite is a Caesium clock that provides the accurate timing reference needed to generate navigation data. The Glonass system provides an accuracy of 100 meters as part of the public segment and 10 to 20 meters for the military users.

The Glonass-M satellite was shipped from manufacturer ISS Reshetnev to the Plesetsk Cosmodrome back in November when the launch was still planned for December. Once at the launch site, the spacecraft underwent inspections and stand-alone testing before the satellite was loaded with propellants for its mission. In December, media reports indicated the launch had slipped to January; February 7 was later identified as the new launch target.

No information was published regarding the preparation milestones for the mission, though air route closures posted earlier in the week suggested that preparations were on track for a Saturday night liftoff.

Countdown operations are expected to get underway on Saturday, about 8 hours ahead of the planned liftoff time of 0:21 UTC. Soyuz 2-1B will complete a nominal ascent mission of over nine minutes, starting with a two-minute burn of its four liquid-fueled boosters. The core stage will continue firing until four minutes and 45 seconds into the flight when the third stage will take over in the typical hot staging sequence. Burning its engine for four and a half minutes, the third stage of the 46-meter tall rocket will be tasked with delivering the Fregat Upper Stage and Glonass satellite into a trajectory that is nearly orbital.

With Soyuz lifting the stack to its planned trajectory, it will be up to Fregat to conduct three main engine burns to boost the Glonass-M satellite to its operational orbit over 19,100 Kilometers in altitude. The first burn will be rather short in duration to place the stack into an orbit of about 200 by 240 Kilometers at an inclination of 64.8 degrees. After a short coast phase to set up the proper location for the apogee/perigee of the orbit, Fregat will re-ignite its S5.92 engine on a burn of nine and a half minutes to raise the apogee of the orbit to nearly 19,150 Kilometers before entering a three-hour long coast phase to climb all the way to apogee.