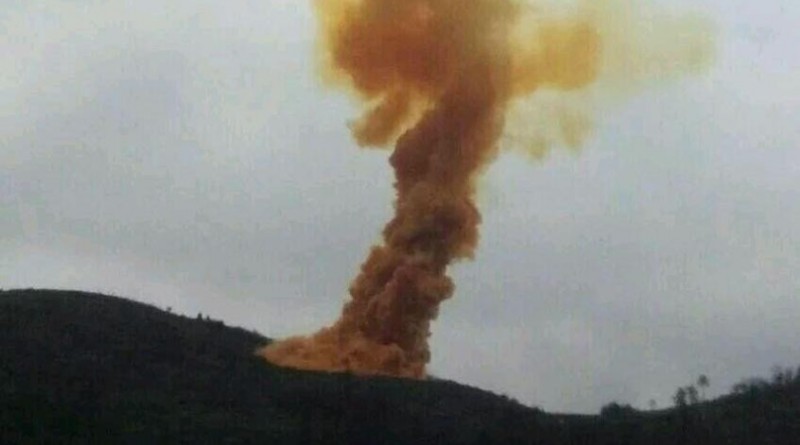 Photos emerged on the Internet of the aftermath of this week’s successful launch of a Long March 3C rocket carrying China’s next Beidou-3 third-generation navigation satellite to orbit. Shown in the images is the scenery immediately following the impact of the twin boosters of the Long March rocket with a large cloud of toxic propellant residuals rising from the wreckage of the spent boosters.

The 56-meter tall Long March 3C Rocket thundered off from the Xichang Satellite Launch Center at 7:29 UTC on Monday, heading uphill with a total thrust of 458-metric-ton-force. Swinging to the south-east, the rocket began heading across the Chinese mainland, en-route to a pass over the Island of Hainan before flying out over the Pacific Ocean. The twin boosters fired for two minutes and 20 seconds, separating from the larger core stage that continued firing for another twenty seconds using its four-engine cluster.

Stage 2 fired for three minutes before handing off to the cryogenic third stage which boosted the stack into a preliminary orbit. Separating from the carrier rocket, it was up to the YZ-1 upper stage to conduct a pair of engine burns – the first immediately after separation to raise the apogee to the desired altitude and the second after a multi-hour coast phase to circularize the orbit over 21,000 Kilometers in altitude. A successful spacecraft separation was confirmed by official Chinese media several hours after the launch.


Tracking data was collected for three objects delivered to orbit in this launch:

After the various stages of the CZ-3C rocket had done their job and separated from the carrier rocket, they continued on a ballistic arc, eventually impacting downrange from the Xichang launch site. Navigational warnings were published ahead of the launch and the Chinese military oftentimes clears downrange impact zones to ensure no harm to human life is caused by falling rocket debris.

Spectacular photos were captured in Panxian County, about 370 Kilometers downrange from the launch site, where the boosters impacted. The photos, published via the Chinese social media service Weibo, show the aftermath of the booster’s return to Earth in the form of a very large cloud of residual, unburnt propellant released upon impact of the boosters. The orange-brown color is caused by Nitrogen Tetroxide, used as oxidizer on the boosters, first and second stage of the Long March 3C rocket. Nitrogen Tetroxide, as well as the Unsymmetrical Dimethylhydrazine fuel, are toxic substances and their release can be harmful to humans and the environment.

No casualties were reported as a result of the impact of the boosters and further images show the wreckage of the boosters in a forest, still releasing toxic propellant fumes. Photos of Chinese rocket and fairing debris are not uncommon since most Chinese rocket stages end up on land due to the use of inland launch sites. Usually, rocket stages are retrieved from the crash sites by the Chinese military to become scrap metal.

China’s future launch vehicles will step away from the use of hypergolic propellants, facilitating a major change in rocket technology and switching from toxic propellants to the more environmentally friendly Kerosene/LOX propellant combination. Long March 6 fills the light-lift spot in China’s new launch vehicle fleet, operating alongside the medium-lift Long March 7 and the heavy-weight Long March 5. The new launchers use modular systems and common components across the different rockets as a cost-saving measure and to quickly build up flight heritage.

To alleviate the problem of rocket debris falling on China’s mainland, the country will open the Wenchang Satellite Launch Center for business this year with the first launches of the CZ-5 and CZ-7 rockets. Located on Hainan Island, the launch base is China’s southernmost orbital launch site and offers ascent trajectories over the ocean. However, Chinas heritage rockets will continue flying from the three inland launch centers for years to come and more impacts of engines and rocket parts on villages and housing areas will be inevitable.