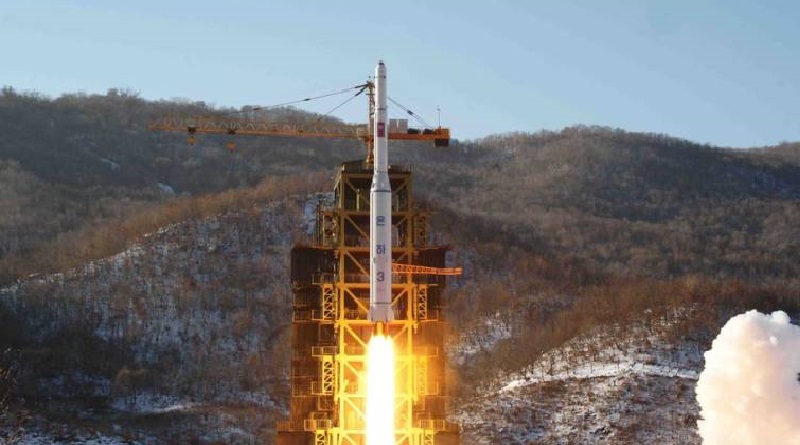 North Korea is accelerating the country’s planned satellite launch according to documentation submitted by the DPRK to the International Maritime Organization. The planned launch of North Korea’s Unha launch vehicle is now planned between the 7th and 14th of February, moved forward from the original February 8-25 launch period. What prompted North Korea to speed up this launch campaign is not known.

Navigational warnings published earlier this week show a daily launch window from 22:30 to 3:30 UTC, 7:00 to 12:00 local time. Downrange safety areas identified for the impact of rocket stages further confirm the identity of the launch vehicle as an Unha-3-type rocket flying in an identical or similar configuration to the April and December 2012 launches, the second of which achieved the country’s first successful orbital launch.

Analysis of satellite imagery by 38 North supports claims of an upcoming space launch from the Sohae Satellite Launching Station on North Korea’s west coast with increased activity noted since January. This week, tankers were spotted rolling up to propellant storage areas in preparation for the fueling of the 30-meter tall rocket that is likely already standing atop its launch pad, undergoing final subsystem checks before tanking is completed in the days leading up to liftoff.


The launch window in the pre-noon hours suggests that operators of the Kwangmyongsong satellite desire to set up morning passes over North Korea for the collection of imagery at favorable sun elevation angles.

If following the same orbital setup of the failed April and the successful December 2012 launches, liftoff can be expected approximately two hours after sunrise – between 0:15 and 0:30 UTC depending on the chosen launch date within the one-week window.

A launch coinciding with the 70th anniversary of the formation of the ‘Provisional People’s Committee for North Korea’ on February 8 appears to be a probable scenario given North Korea’s interests in commemorating dates deemed to be significant in the country’s history. One more such data comes up on the 14th, commemorating Kim Jong-Il becoming the head of the Central Committee of the Workers’ Party of Korea in 1974.

This is North Korea’s first orbital launch attempt since December 2012 when the Kwangmyongsong-3 satellite became the country’s first spacecraft to successfully reach orbit after a series of three launch failures in 1998, 2009 and April 2012.