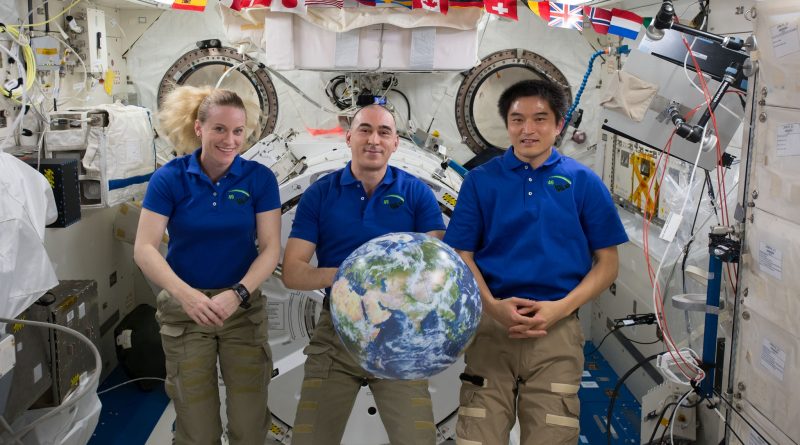 An international crew trio from Russia, Japan and the U.S. is ready to undock from the International Space Station aboard their Soyuz MS-01 spacecraft to put an end to a 115-day space flight with a parachute-and-rocket-assisted landing in South-Central Kazakhstan Sunday morning.

ISS Expedition 49 and Soyuz MS-01 commander Anatoli Ivanishin and Flight Engineers Takuya Onishi and Kate Rubins will board their spacecraft at 21:15 UTC on Saturday and undock from the Space Station at 0:35 UTC on Sunday to set sail on a short free flight of two laps around Earth prior to the critical deorbit burn that will put Soyuz on an intercept path with Earth’s atmosphere.

Blazing through Earth’s upper atmosphere, Soyuz will slow down to safely open its parachute for a quiet descent, culminating in the ignition of the craft’s Soft Landing Engines at 3:59 UTC for touchdown in the Southern Landing Zone in Kazakhstan after circling the Earth 1,840 times.


The three Soyuz MS-01 crew members lifted off from Baikonur on July 7 and completed a two-day link-up with the orbiting laboratory to facilitate tests of the upgraded Soyuz MS systems including satellite communications and improved navigation systems.

After their textbook docking, the crew was greeted by the resident crew of Jeff Williams, Alexey Ovchinin and Oleg Skripochka for two months of joint operations as part of Expedition 48 – supporting a busy schedule of experiment operations inside ISS as well as a pair of Spacewalks performed by Williams and Rubins to install a new docking adapter for future commercial crew traffic, retract a no-longer needed thermal radiator and put in place new HD cameras on the exterior of ISS for inspections and Earth Observation.

A highlight of ongoing research aboard ISS was the first DNA Sequencing performed by Kate Rubins, a trained microbiologist, to validate this scientific capability in orbit and add it to the Station’s science repertoire for upcoming experiments studying the changes undergone by organisms in the spaceflight environment on the genomic level – one particular area of interest when looking to extend crewed stays in space for future missions.

Expedition 50 started in early September with the departure of Soyuz TMA-20M and the three crew members were only expecting to have ISS to themselves for two weeks, but the subsequent Soyuz launch had to be delayed a full month due to a wiring problem discovered only days before the planned liftoff.

The Soyuz trio is departing the Station just nine days after the second half of the ISS Expedition 49 crew arrived, making for some busy days in orbit to facilitate the handover of crews that is normally completed over a period of weeks during longer six-crew increments.

In addition to handing over ISS facilities and experiments, the crew also supported a variety of other activities including the arrival of the Cygnus OA-5 spacecraft last Sunday, a planned ingress of the BEAM Expandable Module to retrieve samples for return on Soyuz, a session of the Airway monitoring experiment at reduced pressure inside the airlock and the initiation of the Veggie experiment to grow lettuce on ISS.

While all these operations were in full swing, the departing crew members also found time to complete a series of descent drills to ensure all would be on the same page during Saturday night’s landing maneuver, also going over contingency scenarios and checking their Sokol suits for leaks. The crew gathered return items in the last several weeks to be packed into the Entry Module while the Soyuz Orbital Module will be used to dispose no-longer-needed items.

Soyuz MS-01 underwent an external inspection using the Station’s new HD cameras and the spacecraft was activated for a series of checkouts to make sure all systems will be operational for the crew’s homecoming. The three returning crew members also tagged up with recovery forces who will deploy to the landing site before sunrise on Sunday to be ready to welcome the crew back on what is expected to be a chilly and overcast morning at the landing site.

The six ISS Expedition 49 crew members gathered inside the U.S. Laboratory in their evening hours on Friday to complete the traditional Change of Command Ceremony in which Anatoli Ivanishin handed command of ISS over to NASA’s Shane Kimbrough who will be at the helm for the next four months.

The crew will have a relatively quiet day on Saturday, sleeping in to be able to support their overnight (UTC) return. Soyuz commander Ivanishin will activate the spacecraft in the afternoon for communication checks with mission control and setups of the flight control system.

The Expedition 49 crew will part ways at 21:15 UTC when the departing crew members will bid farewell before floating into their spacecraft to get set for hatch closure on the Soyuz and the Rassvet module, clearing the way for the standard hour-long leak check. While keeping an eye on pressures in the vestibule area joining Soyuz and ISS, the crew members will put on their Sokol Launch and Entry Suits and strap themselves into their seats inside the Entry Module.

Anatoli Ivanishin will take the commander’s seat in the center, gearing up for his second landing aboard Soyuz, flanked to the left by Takuya Onishi and the right by Kate Rubins – both set for their first return from space.

Pressure checks will be performed on the Sokol suits and the internal hatch of the Soyuz which, by that time, will be running on autonomous power. Hooks on the Rassvet module will be opened up so that only the hooks on the Soyuz side will hold the spacecraft in position.

The Docking Mechanism will be powered up five minutes ahead of the departure followed by the Station transitioning to fine attitude hold to prevent any thruster firings during separation. Soyuz will command its hooks to open 90 seconds before physical separation – expected at 0:35:00 UTC when loaded springs will push the Soyuz off from Rassvet to move away at a speed of just over 0.1 meter per second.

Slowly drifting away from ISS, the crew will survey the Rassvet module’s docking port while keeping close watch over the Soyuz as it re-activates its thrusters for the first separation burn three minutes after undocking. The eight-second DPO thruster burn will provide a thrust component along the R-Bar to increase the opening rate and enable Soyuz to perform a roll maneuver to set up for the second departure maneuver that will be around half a minute long and occur along the velocity-vector to set up the nominal Soyuz departure path.

Departing the Station’s vicinity, the crew will get a fleeting look at their former home in space before settling in for the next orbit and a half around Earth during which the Soyuz opens a sufficient gap to ISS for the critical deorbit maneuver.

Soyuz will transition to a tail-first orientation and open up the protective cover of its SKD main engine as it heads out over a final pass over the Pacific Ocean. Ignition of the 300 Kilogram-force S5.80 main engine is expected at 3:06:33 UTC for a burn of 4 minutes and 37 seconds.

Soyuz will hit the atmosphere at 03:36 UTC as it descends through 100 Kilometers in altitude, traveling 7.6 Kilometers per second. Soyuz will stick to a pre-programmed entry attitude for 89 seconds before enabling Entry Guidance to bleed off energy in a series of bank maneuvers while precisely controlling its downrange travel distance by modifying lift. Barreling through a blaze of plasma, crew will pull around 4Gs when Soyuz is 34 Kilometers in altitude, rapidly decelerating for the opening of the parachutes.