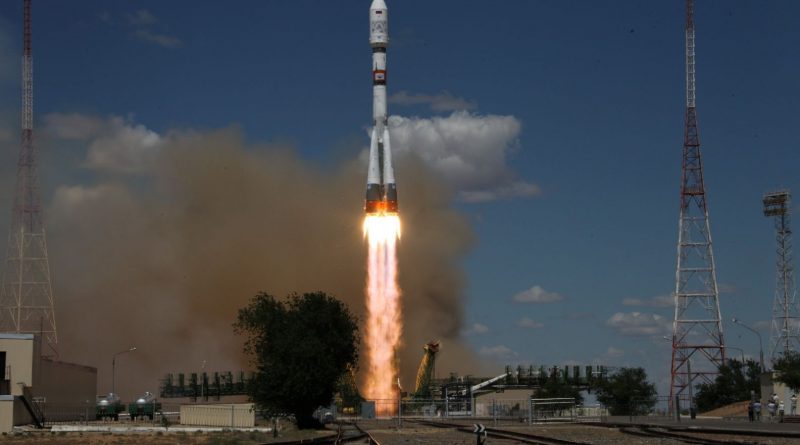 Russia’s Soyuz rocket thundered into clear skies over the Baikonur Cosmodrome on Friday, embarking on an all-day ascent mission with an impressive stack of 73 payloads hidden under its protective payload fairing for operators in Russia, the U.S., Japan, Germany, Norway and Canada – ranging from Earth-imaging & ship-tracking satellites to technical demonstrations and an ‘orbital lighthouse’ that could become the brightest artificial object in the sky.

The Soyuz 2-1A rocket lifted off from Site 31/6 of the storied Kazakh Cosmodrome at precisely 6:36:49 UTC and turned straight north in order to reach a high-inclination orbit that allows the satellites to remain in constant daylight. Powering away from Earth, Soyuz dropped its four liquid-fueled boosters two minutes into the mission and handed from its large core stage to the modified Block I third stage just shy of five minutes into the mission for another four minutes of powered ascent into a sub-orbital trajectory.


Soyuz finished its job for the day eight minutes and 49 seconds into the flight when the Fregat Upper Stage separated and took over powered flight duties for an eight-and-a-half-hour, up-and-down roller-coaster mission targeting three distinct orbits for the release of the Kanopus V-IK Earth Imaging Satellite and 72 secondary payloads of various sizes – creating a mission duration of over eight hours.

Roscosmos confirmed Friday afternoon that all satellites were deployed into the targeted orbits.

Friday’s mission marked the biggest cluster mission in Soyuz’s five-decade service history but did not come close to the world record for the most satellites launched in one go, set by India’s Polar Satellite Launch Vehicle this February when launching 104 satellites, including 101 CubeSats. However, Soyuz is no stranger to multi-payload missions and its Fregat upper stage allows the launcher to deploy satellites into different orbits optimized for their respective operational application.

The payload stack boosted into orbit on Friday was headed by the 600-Kilogram Kanopus V-IK Satellite representing the Roscosmos-operated primary payload of the launch. It was joined by five micro satellites for Germany, Japan, and Norway/Canada plus 67 CubeSats for operators in Russia and the U.S, hosted by a total of twenty deployers installed around the four-tier payload dispenser.

The secondary payload rideshare opportunity on Friday was managed by Glavkosmos, a subsidiary of the Roscosmos State Corporation established to commercialize Russian space technology. Glavkosmos hopes to become a major player on the commercial launch market by offering low-cost launch opportunities for small satellite operators on Russia’s reliable Soyuz launch system. The company cites its ability to flexibly manifest payloads on different Soyuz missions, deploy satellites to optimized operating orbits and a competitive launch price as its major selling points as well as the reliability record of the venerable Soyuz booster.


Up to 120 secondary payloads are manifested by Glavkosmos in 2017 – the majority of which lifted off on Friday with another two launches planned from the Vostochny Cosmodrome toward the end of the year. The company hopes to continue at a cadence of three missions per year with at least one headed into Sun Synchronous Orbit, the preferred destination of the world’s imaging and ship-tracking satellites.

Glavkosmos bets on cutting out the middle man – directly working with small satellite operators to manifest missions instead of going through a launch broker that collects small satellite missions and contracts rideshare packages to a launch provider. The company says this will allow for individual payloads to be flexibly moved between Soyuz missions as needed by the customer and create a more competitive launch price.

The small satellite market has been on the up and up ever since the CubeSat form factor found its way into operational applications for commercial entities in the fields of Earth remote sensing, ship-tracking, aeronautical monitoring and others – made possible by the miniaturization of once large sensor and payload systems to fit into the limited volume of CubeSats which were originally envisioned to provide a standardized way for academia to access space.

The SmallSat industry is projected to hold a considerable share in the global space economy in the coming decade, with a projected volume of $30 billion for satellite construction & launch; and a total of 6,200 satellites headed into orbit through 2026 – a major increase over 900 small satellites (<500kg) launched in the previous decade. With an aggregate mass of nearly 1,100 metric tons, the upcoming flood of small satellites will be dealt with by launch providers offering rideshare missions as well as emerging small satellite launchers offering dedicated rides to operators to individually set their target orbit and mission time table.

Friday’s launch showcased Soyuz’s capability to carry medium-class satellites, micro sats and CubeSats of different sizes on a single mission – featuring a 600kg primary payload, micro satellites between 17 and 120 Kilograms and CubeSats complying with the 6U, 3U and 1U form factors, being launched in 13 QuadPacks, two 6U deployers, and five Poly-Picosatellite Orbital Deployers – combining a wide variety of launch adapters and deployers.

The 46-meter tall Soyuz rocket headed into countdown operations in the early morning, local time at the Baikonur Cosmodrome with a final set of launch vehicle tests and preparations for the tanking sequence. Russia’s State Commission overseeing all orbital launch activity provided a GO for the two-hour fueling process that picked up around L-4 hours to fill Soyuz with some 274 metric tons of Liquid Oxygen and Kerosene, plus Hydrogen Peroxide to drive the booster and core stage turbopumps and Nitrogen to act as pressurization gas on the lower two stages.

The venting Soyuz rocket was revealed 45 minutes prior to liftoff when the two halves of the Service Structure lowered to their launch position, clearing the path uphill for the R7-based launcher. With the launch pad evacuated and all satellites in launch readiness, Soyuz checked off its final preparatory steps as part of an automated countdown sequence inside T-6 minutes – pressurizing its 12 propellant tanks, switching the Fregat to internal power, purging the engine section for ignition and assuming control at the one-minute mark.

Soyuz came to life at T-20 seconds when igniters fired and flames erupted from the base of the rocket as turbopumps spun up to first reach an intermediate thrust level before ramping the multi-chamber engines to a collective liftoff thrust of 422-metric ton-force – overcoming counterweights to lift off the ground.

Racing into clear skies, Soyuz began powering straight north, heading toward the Russian-Kazakh border on the standard departure to a high-inclination Sun-Synchronous Orbit. The Launch Bunker reported nominal flight parameters as Soyuz guzzled down 1,600 Kilograms of propellant per second to accelerate toward orbit with the boosters doing most of the work throughout the initial flight phase, helping Soyuz accelerate beyond 1.5 Kilometers per second.

Each consuming nearly 40 metric tons of propellant, the 19.6-meter tall boosters shut down their RD-107A engines one minute and 58 seconds into the flight and separated from the still-firing core stage, swinging outward and away from the Block-A stage after a job well done – headed for impact some 355 Kilometers from the launch pad, still on Kazakh territory. Soyuz continued boosting toward space with the core stage’s RD-108A alone, generating 102 metric ton-force of thrust when flying into the tenuous upper layers of Earth’s atmosphere.

The Block A, burning 91 metric tons of LOX and Kerosene, handed off to the third stage via the typical hot staging maneuver 4 minutes and 47 seconds into the flight when the core shut down and the RD-0110-powered third stage fired up at the same moment separation pyros initiated to cut the structural connection between the stages. Only two seconds later, the protective payload fairing split open and dropped away from the payload stack in order to impact in the same zone north east of the Russian City of Perm.

The third stage dropped its aft section covers ten seconds after ignition to fully expose the engine section with its four-chamber main engine and four steering nozzles, generating 30,400 Kilogram-force of thrust for three minutes and 58 seconds to place the stack on a sub-orbital trajectory. Launch Controllers continued to make nominal calls throughout operation of the Block I third stage that burned some 25 metric tons of propellant over the course of its operation, shutting down the engine eight minutes and 46 seconds into the mission followed three seconds later by the separation of the Fregat stage, taking over powered flight duties for a mission of eight hours and 42 minutes.

Fregat’s first order of business was injecting the stack into orbit via a six-and-a-half minute burn of its 2,000kgf S5.92 engine. Fregat flew in its ‘M’ configuration on Friday with extended tanks to hold 5,250 Kilograms of self-igniting UDMH & NTO propellants to be expended during a total of seven main engine burns in a complex flight profile that took Fregat to three different orbital altitudes and inclinations in a roller-coaster-type trajectory.

An 86-second burn of Fregat after half an orbit of coasting was intended to raise the perigee of the elliptical transfer orbit and set the stage for separation of the Kanopus primary payload one hour and one minute after launch into an orbit of 478.6 x 522.5 Kilometers, 97.44 degrees.

The first Kanopus V satellite launched in July 2012 and was expected to be followed one year later by Kanopus-V No.2, however that satellite’s launch was pushed to allow the addition of an infrared-imaging payload to the satellite which was re-named Kanopus V-IK to highlight its infrared capability for fire and hot spot detection down to a size of five meters. In addition to the infrared payload, the satellite hosts a black-and-white imaging system achieving a 2.1-meter ground resolution and a four-band full-color imager that delivers images with a 12-meter resolution.

With Kanopus V-IK on its way, Fregat was tasked with a co-elliptic orbit-raising operation – that is firing up twice at T+1 hour and 36 minutes and 45 minutes later in order to spiral up to an orbit of 595 x 601 Kilometers, 97.61° for the release of the five micro satellites during a 200-second deployment sequence picking up two hours and 25 minutes after liftoff.

After that, Fregat made a slight orbit alteration via its attitude control and settling engines, decreasing the orbital perigee by around ten Kilometers to deploy 19 of the CubeSats (all but the Flock-2k constellation) during a 1,000-second sequence starting at T+2 hours and 33 minutes.

The first secondary deployment is rounded up by Iskra-MAI-85, a 3U CubeSat from the Moscow Aviation Institute, and the sole 1U CubeSat of this mission, Ecuador-UTE-YuZGU – developed under a partnership by the Ecuadorian Universidad Tecnológica Equinoccial and the Russian Southwestern State University.

Afterwards, Fregat was headed down again, re-lighting the main engine for 86 and 72 seconds at T+3 hours & 15 minutes and T+3:57 to move into an orbit of around 465 by 480 Kilometers, 97.00°. Once in that orbit, Fregat coasted passively until T+7 hours and 41 minutes into the mission when a 23-minute deployment sequence picked up to send 48 Dove satellites operated by Planet on their way.

When all 73 passengers were successfully dispatched, Fregat had one final task left – moving into a retrograde orientation and firing up the S5.92 engine one last time for a 116-second braking maneuver eight hours and 15 minutes into the flight, putting the upper stage on a sub-orbital arc for disposal. Fregat was planned to close out its mission after eight hours and 42 minutes with a fiery re-entry over the Indian Ocean.