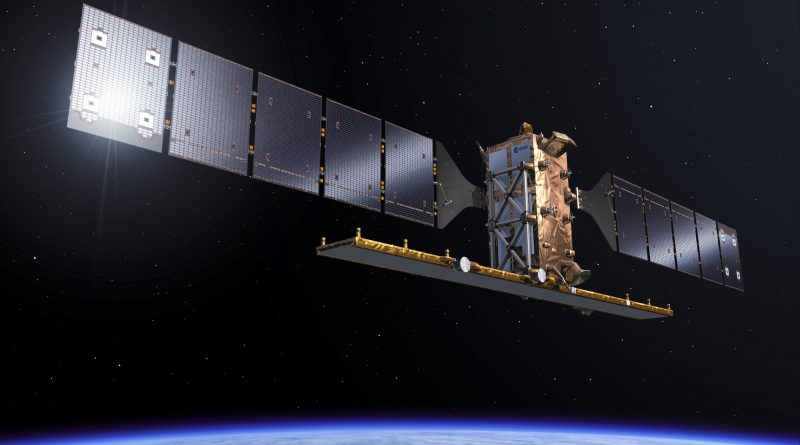 The Sentinel-1B satellite – set to complete the radar pair in the Copernicus satellite constellation – successfully spread its wings in orbit, deploying its solar arrays and 12-meter long radar antenna as part of its critical three-day Launch and Early Operations Phase.

The 2,164-Kilogram Sentinel-1B satellite lifted off from French Guiana on Monday atop a Russian-built Soyuz rocket. Coming after three days of weather and technical delays, the launch was a complete success and also delivered the French MicroSCOPE Physics Satellite and three European CubeSats to orbit in a complex mission design that saw the rocket’s Fregat upper stage maneuver between three different orbits for the deployment of the five spacecraft. The ascent mission took over four hours and ended with the Fregat stage removing itself from orbit and re-entering over the ocean while the satellites completed their first steps in space.


Orbital tracking data for Sentinel-1B was available shortly after launch showing it had entered an orbit close to its target 686-Kilometer Sun Synchronous Orbit. MicroSCOPE and the secondary payload platform jettisoned from the Fregat stage were also tracked within hours, but for the three small CubeSats, it took until Wednesday morning to find them and calculate their orbits:

The Sentinel-1B satellite checked in with a ground station in Norway almost immediately after spacecraft separation and the Mission Control Team at the European Space Operations Center kicked off the three-day LEOP phase to check the spacecraft and transition it to a safe configuration for regular orbital operations.

Solar array deployment occurred around five and a half hours after launch and was followed several hours later by the multi-step deployment of the large Synthetic Aperture Radar Antenna. The antenna consists of five segments featuring joints to allow two segments on each side to be folded against the satellite platform for launch. The central segment is fixed to the nadir-facing side of satellite platform. Deploying one panel at a time, the 880-Kilogram antenna swung open as planned, marking the conclusion of Sentinel’s orbital dance dance about 12 hours after launch.

Further checks of the satellite subsystems and a test activation of the C-SAR radar payload are on the agenda before the LEOP phase is concluded and Sentinel-1B heads into a three-month commissioning operation to prepare the spacecraft for regular data collection as part of the two-satellite radar constellation in the Copernicus Program. With careful orbital positioning in place, the Sentinel-1 twins will deliver global coverage every six days, taking all-weather round-the-clock Earth observation to a new level.

Data delivered by the two Sentinel-1 satellites will be put to use in a variety of areas – the observation of the maritime environment (sea-ice monitoring, oil-spill detection, surveillance of maritime transport zones) and land observations (vegetation monitoring, surface mapping, support of crisis – natural disasters like flooding and earthquakes, and humanitarian aid). The high revisit time of the two satellites will enable the study of changes on Earth’s surface and sea/land ice coverage.

The MicroSCOPE satellite under operation by the French Space Agency, checked in with a ground station in Canada one hour and ten minutes after separation from the Fregat upper stage, reporting to its engineering team that the solar panels had deployed and the satellite was healthy. After 48-hours of initial checks, the mission enters a four-month commissioning phase to verify the functionality of all subsystems before initiating a two-year science mission probing Einstein’s Theory of General Relativity.

Outfitted with a pair of sensitive differential accelerometers, MicroSCOPE will study the physics of free fall, scrutinizing the Weak Equivalence Principle (WEP) which postulates that a perfect proportionality exists between the inertial mass and the gravitational mass of a body. Resulting from the WEP is the ‘Universality of Free Fall’ which states that all objects fall with exactly the same acceleration in the same gravitational field. By placing a pair of masses of different material in an identical gravitational environment, MicroSCOPE aims to determine whether the two experience the same free fall acceleration with an accuracy to the 15th decimal, about 100 times better than any previous measurement.

Good news also arrived for the three ESA Fly Your Satellite! CubeSats – all have started sending signals and were received by operators on the ground. OUFTI-1, setting out to demonstrate space-based communications using an amateur digital communications protocol, and AAUSAT-4, tracking ships across the globe, both started bi-directional communications with ground stations. E-ST@R II, completing a technical demo of an active attitude control system, was received on the ground and work was underway to begin two-way communications.