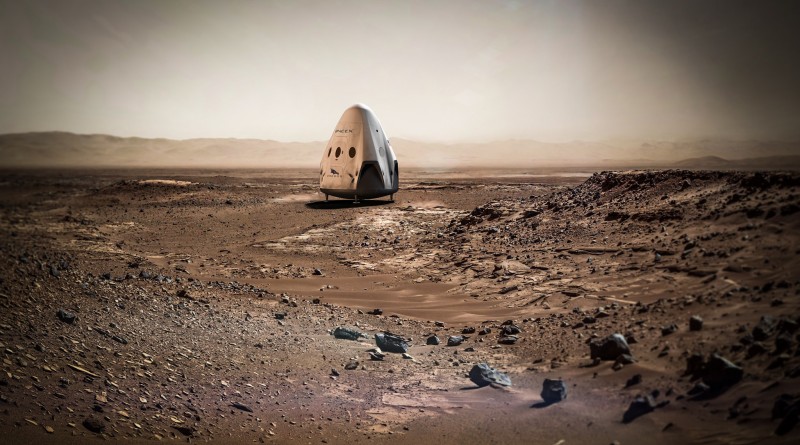 SpaceX announced on Wednesday plans to send an unpiloted Dragon 2 spacecraft to Mars as early as 2018 to demonstrate the technologies needed for landing large payloads on the planet – an absolute necessity for future human exploration of our neighbor in the solar system.

The biggest craft to attempt a landing on Mars, Dragon will become a pathfinder for future landing technologies in the company’s Mars aspirations as well as NASA’s plans of crewed flights to Mars.

The mission, officially confirmed by SpaceX on Wednesday, calls for a Dragon 2 spacecraft to be launched towards Mars atop a Falcon Heavy booster ahead of a propulsive landing on Mars using the spacecraft’s own rocket engines. The concept of a “Red Dragon” – a Dragon spacecraft landing on Mars – had been around since the early days of the SpaceX Dragon spacecraft and SpaceX CEO Elon Musk has set the goal on Mars ever since the formation of SpaceX in 2002.


Elon Musk said earlier this year that he would reveal an outline of his planned Mars colonization architecture in September at the International Astronautical Conference held in Guadalajara, Mexico.

According to SpaceX, the initial Red Dragon mission will be a critical step in the development of systems capable of delivering large payloads to Mars – critical requirement for future human missions which – according to Musk – could begin as early as 2025, well before NASA’s ‘Journey to Mars’ would reach its destination in the late 2030s.

SpaceX entered a no-exchange-of-funds Space Act Agreement with NASA under which SpaceX provides the funds for the mission and NASA offers technical support to the firm. Per the agreement, SpaceX will share all data collected during the ambitious Entry, Descent and Landing Sequence with NASA to help the agency’s own Martian efforts. SpaceX may also afford NASA the opportunity of flying instruments on the Red Dragon mission.

The Dragon 2 spacecraft, set for its first test flight to the International Space Station in 2017, is outfitted with a durable PICA-3 heat shield and a powerful propulsion system built around SpaceX’s SuperDraco engine – giving the craft the ability to complete a guided, propulsive landing on Earth or any other body with or without an atmosphere. As such, the spacecraft can be used as a crew transport vehicle, a duty it will perform for the ISS Program, or as a science craft carrying out experiments in orbit or setting sail to deliver instrument payloads to destinations beyond Earth orbit.

“Dragon 2 is designed to be able to land anywhere in the solar system,” Elon Musk Tweeted after Wednesday’s announcement. Dragon missions reaching for distant targets will rely on the powerful Falcon Heavy booster for sending them on their way, overcoming the gravitational pull of Planet Earth. Sporting three cores powered by a total of 27 Merlin engines, Falcon Heavy is currently working towards its first test flight from Launch Complex 39A at the Kennedy Space Center later this year.

Launched atop a Falcon Heavy rocket, the Red Dragon will have to endure a coast phase to Mars lasting several months, putting the craft’s electronics to the test in a harsh radiation environment and also testing the SpaceX team given the need for mid-course corrections to ensure Dragon can intercept the Martian atmosphere at a precise location. As part of the Space Act Agreement, NASA will provide assistance in communications, making time slots available on the Deep Space Network.

SpaceX did not elaborate on modifications needed on the Dragon spacecraft to enable deep-space communications and power generation on the Martian surface.

For the landing on Mars, Dragon will rely on its PICA heat shield (Phenolic Impregnated Carbon Ablator) capable of withstanding the most challenging entry heating environments. No parachutes were part of initial concepts of the mission studied by NASA which would permit Dragon to land at high-elevation sites not accessible when relying on a parachute-assisted landing like all previous rover missions did.

The next critical phase will be the firing of the eight SuperDraco engines installed in four pods on the Dragon spacecraft. SuperDraco delivers a maximum thrust of 73 Kilonewtons and is capable of deep throttling to set Dragon down on the surface in a soft landing maneuver. Testing of Dragon’s landing system is currently underway at the SpaceX test facility in McGregor where the DragonFly contraption is undergoing tethered testing to verify the performance of the engines and landing guidance system before upgrading to more ambitious free-flying tests.

Dragon’s propulsion system doubles as a launch abort and landing system. The SuperDracos can reach their full thrust setting in a fraction of a second to pull the Dragon spacecraft out of harm’s way in the event of a launch failure, as demonstrated in last year’s Pad Abort Test, but will also come into play when Dragon homes in for landing to complete a guided descent and high-precision touchdown – on Earth or elsewhere.

Specifics such as potential landing sites or proposed payloads for the Red Dragon mission have not been publicly discussed by SpaceX or NASA, though internally, the project already has a history of around 18 months.

According to the SpaceX website, Falcon Heavy can lift a payload of 13,200 Kilograms to a Trans-Martian Trajectory which should be plenty for the 6,400-Kilogram Dragon plus landing propellant and payload.

Dragon would, by far, be the largest payload sent to the surface of Mars. NASA’s Curiosity rover weighs in at 950 Kilograms and required a complex Descent Stage & Sky Crane System to make its landing in 2012 after the infamous seven minutes of terror from entry to touchdown. For the support of crewed missions, payloads of several metric tons will need to be landed with high reliability – presenting an enormous engineering challenge SpaceX is willing to take on with Red Dragon as a trailblazer for future developments.

Landing a payload of over six metric tons on Mars would further cement SpaceX’s position as a world leader in spaceflight technology. Current systems are capable of delivering payloads of around 1,000 Kilograms to the surface of Mars and NASA has been struggling to prove the technologies that could bring that number up to three metric tons.

Whether SpaceX will be able to keep the aggressive 2018 timeline will depend on a variety of factors not the least being the inauguration of the Falcon Heavy launcher and the first test flights of the Dragon 2 spacecraft to Low Earth Orbit.