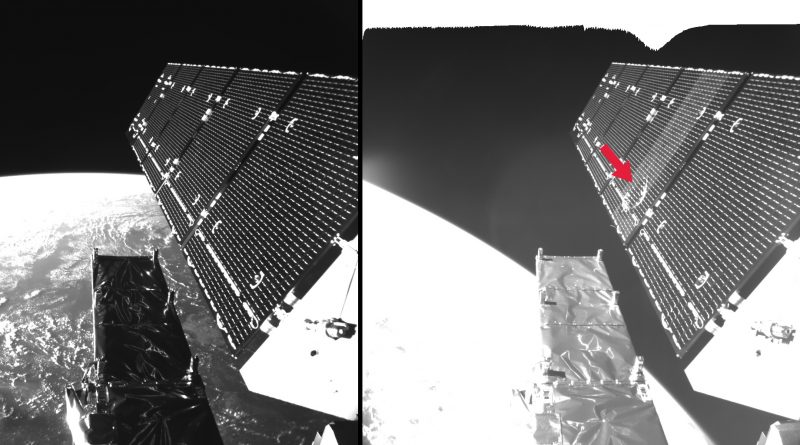 Europe’s Sentinel-1A radar satellite, circling the Earth for over two years as part of the Copernicus Program, suffered a close call recently when a small piece of space debris struck one of the satellite’s two power-generating solar arrays.

The collision took place on August 23, well into the satellite’s third year of operations after being the first in Europe’s Copernicus program to head into space in 2014, marking the inauguration of an Earth-watching satellite constellation comprising a variety of sensors on a variety of spacecraft orbiting the planet at different altitudes.

The particle responsible for the basketball-sized indentation on the solar array was only a few millimeters in diameter, either of natural origin or a fragment of a man-made piece of space hardware. The impact occurred at 17:07 UTC on August 23 and was accompanied by a sudden but slight decrease in the power delivered by the solar array and a disturbance in the satellite’s orientation.


After the impact, the satellite continued sailing in its 700-Kilometer orbit without suffering any serious damage. Nevertheless, engineers were eager to get a look at what happened and took advantage of Sentinel’s onboard cameras that point at the Solar Arrays and were used to document their deployment as well as the unfolding of the satellite’s large C-Band radar antenna.

Images downlinked after the debris impact showed a sizeable dent in the second solar panel of one of the two arrays around 40 centimeters in diameter. The particle impacted the back side of the array and its momentum caused a measurable change in the satellite’s orbit that is normally being maintained very precisely for optimal operation of the C-SAR radar.

With the unique capability of collecting imagery of the affected area, ESA was able to confirm that an impact had taken place. Other satellites without cameras often leave engineers scratching their heads when diagnosing symptoms that could be caused by either, a debris event or onboard problem.

ESA has begun an assessment on whether the hit was by a man-made piece of space debris or a naturally occurring micrometeoroid. This will be possible by analyzing the direction of the incoming particle as well as its size and speed.

Small objects up to around five to ten centimeters in size can not be tracked via ground-based radar and roam near-Earth space by the thousands – presenting a constant threat to satellites in orbit. A catalog is maintained for all trackable objects and satellites routinely perform avoidance maneuvers when their path is forecast to come close to another object, but this is not possible for objects that can not be tracked.

Small impacts are not unexpected over a satellite’s lifetime and often do not have serious consequences. With nearly two decades in orbit, the International Space Station suffered a multitude of impacts, causing some external scars that spacewalking astronauts need to be mindful of to avoid cutting their gloves. Even the Station’s windows were hit by high-speed debris, protected by a Debris Pane that shields the redundant pressure panes of the window.

For Sentinel-1A, the impact will remain without serious consequences. The 5% output drop from the solar array will not be an issue since the arrays deliver more power than the satellite needs for its routine operations. The attitude disturbance was corrected right away by the satellite’s attitude control system and the slight change in the spacecraft’s orbit was corrected in one of the weekly orbit maintenance maneuvers.

Had the impact occurred on the satellite’s body, Sentinel-1A could have suffered serious damage.

Just one day after the satellite was struck, Sentinel-1A was called up to collect radar imagery of Italy where a devastating Earthquake had hit on August 24. The imagery collected on August 15/20 and 26/27 provides a before-and-after look showing the extent of ground deformation caused by the earthquake that claimed the lives of at least 294 people.

The seven interferometric fringes seen in the images correspond to around 20 centimeters of surface deformation.

Data delivered by the Sentinel-1 satellites and their counterparts helps scientists study earthquakes by delivering valuable information from a large area. The radar interferometry conducted with Sentinel-1A and B revealed the ground movement in both vertical and east–west directions

Currently, there are four Copernicus satellites actively gathering data in orbit – The Sentinel-1A and B radar satellites launched in 2014 and 2016, Sentinel-2 launched in June 2015 to deliver high-resolution and multispectral imagery, and Sentinel-3, launched in February, as the most comprehensive satellite in the constellation, outfitted with different instruments for land and ocean monitoring.

Operated by the European Commission, the European Space Agency and the European Weather Agency EUMETSAT, the Copernicus/GMES program aims to deliver relevant Earth observation data to users at a high-level of quality and timely availability shortly after data acquisition. It is Europe’s single most expensive space project with a cost of a projected $10 billion by 2020.