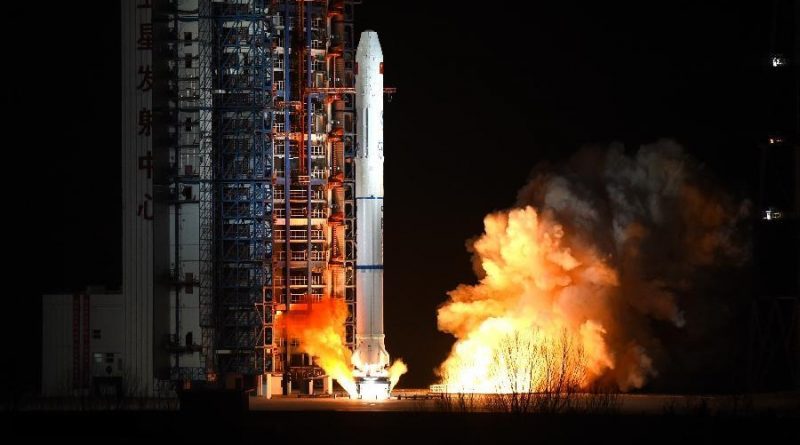 The 46-meter tall Long March 4C blasted off from the Taiyuan Satellite Launch Center in the Shanxi Province at 18:55 UTC on Wednesday, 2:55 local time Thursday morning, to send the Gaofen-10 satellite into a Sun Synchronous Orbit, departing the military launch site to the south.

A per China’s usual secrecy – especially for Taiyuan launches, prior notice of the planned mission only came via navigational warnings identifying the expected drop zones of rocket parts. Normally, Chinese launches are announced after successful mission completion by official media, but the announcement of launch success – expected around 40 minutes after liftoff – never arrived.


Instead, there was complete silence by official news outlets for over 16 hours until photos were published accompanied by a short note identifying the satellite and specifying the launch time. U.S. Space Surveillance did not detect any new objects in orbit, confirming that Long March 4C encountered the world’s first launch failure of 2016.

This failure ended a remarkable streak of successful missions that continued since last December’s failed launch of a Russian Soyuz 2-1v rocket with the Kanopus ST satellite.

Following the events of Wednesday night, Chinese villagers in Shanyang County discovered debris of the CZ-4C in the morning hours on Thursday. The first stage debris were found in the expected area around 600 Kilometers from the launch site, confirming that the first stage performed as planned and separated at the expected energy.

Further downrange, about 1,050 Kilometers from Taiyuan, remains of the rocket’s protective payload fairing were found to have impacted in a village located right in the center of the expected fairing drop zone. This confirmed that flight was nominal until late in the second stage burn – placing blame either on the second or third stage of the CZ-4C launch vehicle.

This would not be the first failure of a CZ-4-type upper stage. China’s most recent launch failure in December 2013 involved a Long March 4B rocket lifting the CBERS-3 Earth observation satellite for a joint program operated by China and Brazil. The failure was blamed on the premature shutdown of one of the two YF-40 third stage engines due to a blockage in the fuel line.

The first and second stage of the CZ-4C are identical to the Long March 4B rocket while the third stage is slightly modified and employs a re-startable version of the YF-40 with slightly different performance parameters. Other changes to the CZ-4B version include the use of an improved flight computer, a more accurate guidance system and propellant utilization capability on the third stage.

If the launch failed during the third stage burn, surviving debris likely ended up in the ocean, possibly traveling as far as Antarctica depending on the exact timing of the failure.

A failure limited to the third stage would be the best news possible in this scenario since it is unique to the CZ-4 series which would limit a potential knock-on effect to a number of planned Chinese missions.

Set for mid-September was the launch of the Tiangong-2 space laboratory atop a Long March 2F rocket which was to be followed in October by the launch of Shenzhou-11, carrying a crew of two to Tiangong-2 for China’s longest manned space mission to date. The CZ-2F boosters/core stage and CZ-4 use engines representing modified versions of the same base design.

The launch of Long March 5 on its maiden mission in November will most likely not be impacted given this launcher’s design based on Kerolox and cryogenic rocket technology. Long March 5 was delivered to its Hainan launch site this week via ship to be assembled for final testing ahead of its debut mission with the Shijian-17 satellite.

It is noteworthy that over 24 hours have passed without a single mention of a launch failure by official Chinese media. In previous cases, China admitted to failed launches within ten hours time.

Gaofen represents a constellation of Earth Observation satellites flying under the China High-Resolution Earth Observation System CHEOS that saw its first launch in 2013 and was initially planned to comprise seven satellites, but since then has been expanded. The goal of the program is to establish a responsive Earth observation architecture by delivering a variety of sensors to orbit in order to obtain data products for a wealth of applications.

CHEOS can be compared to Europe’s Copernicus program that is currently in the process of establishing a constellation of satellites operating from different orbits and hosting varied instruments to deliver relevant Earth observation products.

The Gaofen satellites are outfitted with high resolution, multispectral optical imagers, Synthetic Aperture Radars, infrared imaging systems, microwave detectors and specialized sensors. Satellites belonging to CHEOS are operated from different orbits including Low Earth Orbit and Geostationary Orbit in order to create data products of different qualities and revisit times to establish an architecture that delivers both, high-resolution products and high-cadence imagery in support of near real-time monitoring applications.

The first Gaofen satellite was launched in April 2013 based on the compact CAST-4000 satellite platform, hosting a 400-Kilogram imaging payload featuring a pair of High-Resolution Cameras and four Wide Field Imagers. With its payload, Gaofen-1 can deliver imagery of a 69-Kilometer wide ground swath, reaching a resolution of two meters for panchromatic images and eight meters for multispectral imagery. The Wide Field Imagers reach a 16-meter resolution but cover a much wider swath of 830 Kilometers.

Gaofen-2 was lifted by a Long March 4B rocket in August 2014 and carries a High-Resolution Imaging Payload. Based on the CS-3000A platform, the satellite delivers imagery at an 80-centimeter ground resolution in the panchromatic band along a 48-Kilometer swath. Multispectral imagery reaches a resolution of 3.2 meters.

Gaofen-3 was launched just last month atop a Long March 4C, using another version of the CS-3000 platform hosting a large deployable radar antenna operating in C-Band. The Synthetic Aperture Radar bounces radio waves off the ground to enable all-weather, round the clock land and ocean monitoring. The instrument can operate in different modes covering a ground swath between 10 and 650 Kilometers at varying resolutions.

Gaofen-4, launched in December 2015, is the first in the program to operate from Geostationary Orbit – employing a staring camera to deliver 400 x 400-Kilometer frames from a 7,000 x 7,000-Kilometer observation area, reaching a ground resolution of 50 meters. From its high-altitude vantage point, Gaofen-4 delivers data in near-real time.

Gaofen-5 is expected to fly in 2017 and will carry a suite of six payloads including a hyperspectral camera, a spectral imager, greenhouse gas monitor, trace gas spectrometer, infrared detector and multi-angle polarization instrument. Gaofen-6 will be a carbon copy of the first satellite to replace it at the end of its operational life and Gaofen-7 is going to host a hyper-spectral stereo imaging payload, not expected to launch before 2018.

Originally, these seven satellites were to form the Gaofen space segment, however, 2015 saw the launches of Gaofen-8 and 9 that likely represented additions to the original constellation. The current belief is that this expansion of the program is the result of the merger of a military project with the civilian CHEOS program.

It is suspected that the additional satellites find their origin within the Yaogan military reconnaissance satellite series operated exclusively for military applications while Gaofen is most likely used for civilian and military purposes as needed. The capabilities of Gaofen and Yaogan are very similar in terms of ground resolution.

Given the lack of information available on the payload carried by Gaofen-10, it is safe to assume that it also represents one of the later additions to the program coming from a military background.