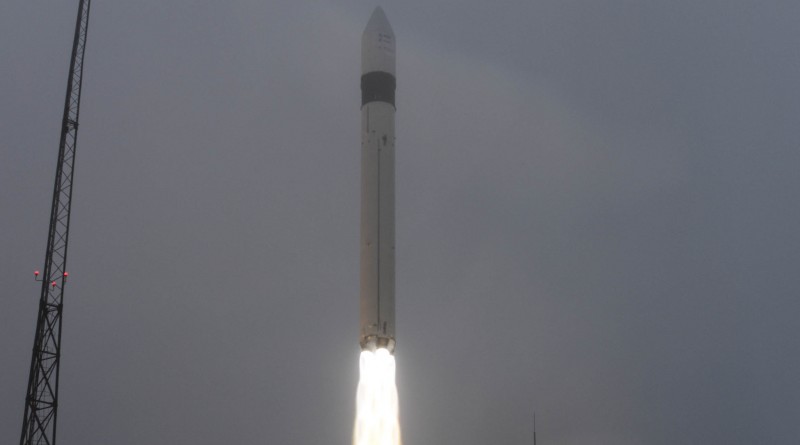 A Russian Rockot launch vehicle thundered into the night skies over the Plesetsk Cosmodrome on Wednesday, blasting off from its above-ground launch container at Site 133/3 at 22:00 UTC to loft a trio of Rodnik military communication satellites into orbit, likely joined by a fourth spacecraft dedicated to technology demonstrations under the framework of the Russian military’s Kosmos satellite program.

Blasting off from Plesetsk, Rockot was to burn its two lower stages for five and a half minutes to send the Briz-KM upper stage on its way to conduct a two-burn mission, the first of which was planned to boost the stack into an elliptical transfer orbit followed by a long coast phase. At the apogee of the orbit, the upper stage is planned to re-ignite and boost the satellites to a circular orbit just over 1,500 Kilometers in altitude. Spacecraft separation is expected one hour and 45 minutes after launch. Official confirmation of launch success will be provided after a good satellite separation has been confirmed.

The three Rodnik-S satellites will become a part of the Strela satellite constellation operated by the Russian Ministry of Defence to deliver secure communications to government agencies and military operators. Orbiting at 1,500 Kilometers in altitude, the satellites can be used for point-to-point and store-and-forward voice and data communications beyond the operator’s line of sight.


Rockot, a re-purposed UR-100N Intercontinental Ballistic Missile, can be used as a space launch vehicle when topped by a Briz-KM upper stage to be able to loft over two metric tons of cargo to a Low Earth Orbit. Rockot stands 29.15 meters tall and has a main diameter of 2.5 meters and a launch mass of 107 metric tons. All of its stages use Unsymmetrical Dimethylhydrazine and Nitrogen Tetroxide as propellants.

As part of final preparations, the tracking stations needed for the launch were verified and the Mobile Service Tower was retracted from the launch pad featuring the Transport and Launch Container with Rockot inside.

The Terminal Countdown Sequence was initiated at T-3 minutes as the automatic countdown sequencer assumed control of the last set of countdown events to transition the rocket to its autonomous launch configuration. The last steps prior to liftoff included the transfer to internal power on the Rockot vehicle and the Briz-KM as well as the pressurization of propellant tanks.

Blasting off at 22 UTC on Wednesday, Rockot emerged from its launch container, lighting up the skies over Russia’s primary military launch site.

Rockot’s first stage is powered by a package of three RD-0233 and one RD-0234 engines creating a total liftoff thrust of 190,700 Kilogram-force – enough to catapult the vehicle out of its above-ground container with an initial thrust to weight ratio of 1.76. The first stage measures 17.2 meters in length and holds 71,500 Kilograms of propellants. Control during first stage flight is provided by individually gimbaling the four engines.

Staging between the first and second stage uses a hot-staging sequence that begins two minutes and 12 seconds into the flight with the ignition of the RD-0236 four-chamber vernier engine of the second stage. Three seconds later, the first stage was planned to shut down, to be followed one second later by the initiation of pyrotechnic charges that cut the structural connection between the stages so that the second stage can pull away from the spent first stage.

The second stage was set to ignite its RD-0235 main engine at T+2:19 to continue boosting the vehicle into orbit with a total thrust of 24,500 Kilogram-force. Rockot’s second stage is 3.9 meters long and launches with a propellant load of 10,700 Kilograms. Passing 120 Kilometers in altitude, Rockot was to jettison its protective payload fairing, shedding unnecessary weight since the satellites can no longer be harmed by aerodynamic forces at that altitude.

Briz-KM was set for an initial burn of 9.5 minutes to boost the stack into a transfer orbit with an apogee altitude of 1,500 Kilometers. Shortly after separation, Briz-KM was to ignite its settling thrusters in preparation for the first main engine burn that was to be about 9.5 minutes in duration to deliver the stack to an elliptical Parking Orbit with an apogee of about 1,500 Kilometers.

Ending its first engine firing, Briz-M was to enter a coast phase to climb all the way to the apogee of its transfer orbit in order for the second burn to serve as circularization maneuver. This maneuver was expected to last just under 60 seconds to bring up the perigee, aiming for a circular orbit of around 1,520 Kilometers inclined 82.5 degrees. Separation of the three spacecraft is expected around one hour and 45 minutes after liftoff to mark launch success.

Briz-KM will conduct an orbit-reduction maneuver to accelerate its orbital decay and move its out of the satellites’ orbit.

It is likely that this launch, in addition to the three main payloads, also carried a fourth satellite into orbit – a pattern that repeated itself in several Rockot missions starting in 2013. Three classified Kosmos satellites were delivered to orbit as part of recent Rockot missions, primarily dedicated to technology demonstration missions that included in-space rendezvous and formation flying tests. Whether this launch also carried a fourth satellite will be confirmed when tracking data becomes available. One likely candidate that has been waiting for liftoff for quite some time is the DOSAAF-85 technology satellite, described in detail below.

The Payload for this flight is a trio of Rodnik-S Spacecraft which will become a part of the Strela Constellation of military communications satellites. Strela Satellites are based on the civilian Gonets Communications Satellites.

Current Gonets Spacecraft, designated Gonets D1M have a launch mass of 280 Kilograms and provide 16 channels for uplink and 16 for downlink. Data transmission of rates of up to 64Kb/sec are supported in frequency ranges of 260MHz and 312-390MHz. For beam accuracy, the spacecraft use the Russian GLONASS positioning satellite system with a user position accuracy of 100 meters. The daily data throughput for each spacecraft is expected to be at least 270Mbit.

The Spacecraft are equipped with Solar Arrays providing 40W of electrical power and Nickel/Hydrogen Batteries. The expected on-orbit life time of a Gonets Spacecraft is 7 years. Gonets stands for ‘Messenger’. The Rodnik Satellites are believed to be an improved version of the Strela-3 Spacecraft that have been launched from 1985 to 2010. The Strela Satellite Constellation consists of 12 to 18 satellites in a Low Earth Orbit. Gonets and Strela Satellites are built by NPO Prikladnoi Mekhaniki.

***The presence of the DOSAAF-85 satellite on this launch is subject to confirmation!***

The DOSAAF-85 satellite is a technology demonstration and amateur radio satellite designed and built by ISS Reshetnev and the Siberian State Aerospace University based on the Yubileiny small satellite bus.

The 30-Kilogram Yubileiny satellite bus is hexagonal in shape and consists of three trays – a bottom, central and top tray to host the different equipment of the spacecraft. The outer shell panels are covered with solar cells for a power generation of more than 20 Watts using Gallium-Arsenide triple-junction solar cells. Power is stored in a Nickel-metal-hydride battery and provided to the various subsystems by a power distribution unit conditioning a 12-Volt power bus. Thermal control is provided by multilayer insulation, electric heaters and conductive heat pipes and radiators.

Attitude control is accomplished through the use of a deployable gravity gradient boom installed on the bottom tray of the satellite to provide passive stabilization as the satellite orients itself in the presence of Earth’s gravitational field. The mass on the tip of the boom contains a magnetometer which can be used to attitude determination.

The bottom tray can also host sun sensors for attitude determination and provides space for payloads that require zenith-pointing as the bottom tray is pointing up in the nominal satellite orientation. Overall, Yubileiny achieves a pointing accuracy of 3° on the pitch and roll axes and 20° on the Yaw axis.

The vehicle uses a VHF uplink system at 145 MHz for commanding and a UHF telemetry downlink system reaching data rates of 2.5kbit/s. A dedicated S-Band communications system is used for the downlink of payload data up to 1Mbit/s at a frequency between 2400 and 2485 MHz.

The satellite payload is hosted on the top tray that also includes attitude control equipment and communication antennas. The exact nature of the DOSAAF-85 satellite payload has not been disclosed. Payloads flown on previous Yubileiny satellites included an optical Earth observation payload, a communications payload for demonstrations and different technical demonstrations such as space environment sensors.

The Yubileiny satellite launched on May 23, 2008 weighs 48 Kilograms and demonstrated nano-coatings to protect satellite electronics from the radiation environment in space by measuring the received dose with and without the protective coating. The satellite was also used for outreach, broadcasting audio and video on the history of the Soviet and Russian space program and imitating the transmissions of Sputnik-1 to commemorate its 50th anniversary.

Launched on July 28, 2012, the MiR (Mikhail Reshetnev) satellite also known as Yubileiny-2 was based on the Yubileiny satellite platform and carried a payload of 35 Kilograms for a total spacecraft mass of 65 Kilograms. MiR was tasked with the demonstration of a camera system for Earth observations and remote sensing, a pressure and temperature sensing system and a new attitude control system.

Three classified Kosmos satellites launched on Rockot missions between 2013 and 2015 are candidates for Yubileiny-type satellites flying technical demonstration missions for the Russian military.